Gastaldello Leads 50 Back in Day 2 Prelims of French Nats 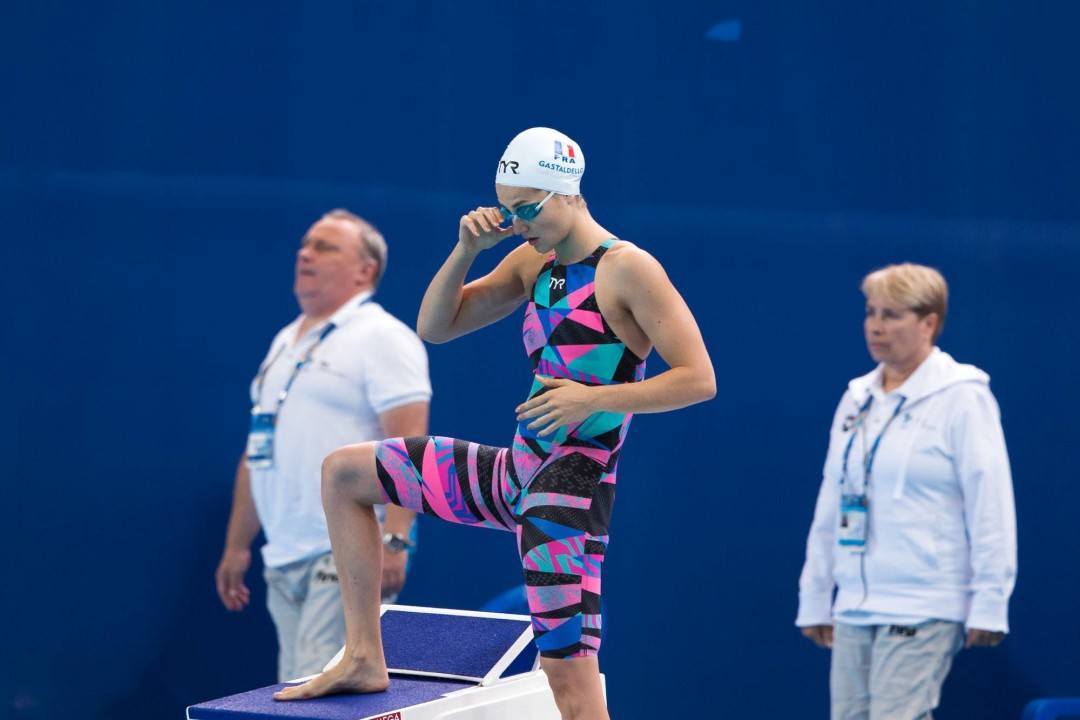 With that, Gastaledllo is just 6 hundredths shy of the FINA A cut, which stands at a 28.52 that she'll go after in finals. Archive photo via Tim Binning/TheSwimPictures.com

The 2017 French Elite Long Course Nationals continued this morning in Strasbourg with day 2 prelims. Swimmers gathered to compete in the men’s 200 free, 400 IM, and 100 breast, while the women competed in the 200 fly, 50 back, and 1500 free. The fastest 8 seeds in the 1500 free haven’t swum yet, as they’ll be racing during the finals session. Read on for highlights from today’s morning session.

Texas A&M-based Béryl Gastaldello raced to top seed in the 50 back prelims. Gastaldello was the only swimmer of the morning to clear 29 seconds, clocking in at 28.58 ahead of Mathilde Cini (29.15). With that, she’s just 6 hundredths shy of the FINA A cut, which stands at a 28.52 that she’ll go after in finals.

In the women’s 200 fly, Lara Grangeon set up a battle with Dutch swimmer Sharon Van Rouwendaal, a World Championship medalist freestyler, as they took the top 2 seeds. Grangeon set the pace, as she landed top seed by over 2 seconds in 2:11.50. Van Rouwendaal followed for 2nd seed with her 2:13.74.

Men’s 200 free. 1. Jonathan Atsu in 1.48.15. He confirms his prelims but no qualification in the individual event. HIs first national title at that level.
2. Jordan Pothain in 1.48.66. 2.10 s off her best time. After his bad 400 free yesterday that’s not surprising. Very tough week for the hopeful. Maybe he can’t handle the pressure of being the favorite now with Agnel retired and Stravius focusing on shorter events. HIs season so far was average so that’s not totally unexpected.

Disappointing from Pothain. Nowhere near last year’s level. Could be right that he’s struggling with the promotion to leader. He’s still young enough, and hopefully will come back strong, but a bit of a wasted year. Still has an outside chance of making the 4×100 free relay, but very unlikely given his form so far.

No qualifiers on day 2, the 4×200 relay also missed out on qualification too, could be a small squad for worlds at this rate…

Forgot that Muller made the QT, though as said above I only unlikely she’ll compete indoors at worlds…

Women’s 1500 free. 1. Aurélie Muller in 16.24.34. As expected no record. She doesn’t have enough speed. Lucas didn’t look very happy. But her goal is open water. She did the required time but not sure she swims in the pool in Budapest.

Bussiere with a 1:00:62, I think it’s a PB (at least it’s quicker than his entry time), but not enough to qualify. He’ll probably make it as a relay swimmer (I expect the medley relay to qualify), but I think under the criteria that means he won’t swim the individual.

Yes PB for Bussière. I’ve mentioned the PBs of the favorites above.
The medley relay is in rebuilding mode with no more Stravius or Lacourt on backstroke. Hopefully Mathieu can convert his 200 back progression in the 100 back too.

Grangeon just missing out on the QT with a 2:09:35, only a few hundredths short, but if the selectors stick to their guns that means she won’t be going to Budapest (don’t think she has any other events, having apparently dropped the 400IM). A tad unfortunate perhaps when it’s that close, but the QT was well outside her PB, so can’t have too many complaints.

On TV they said that Grangeon will try to make the team in the 25 km open water next week.
Talking about open water, Muller swam a marathon of 57 km in Argentina last February. 🙄