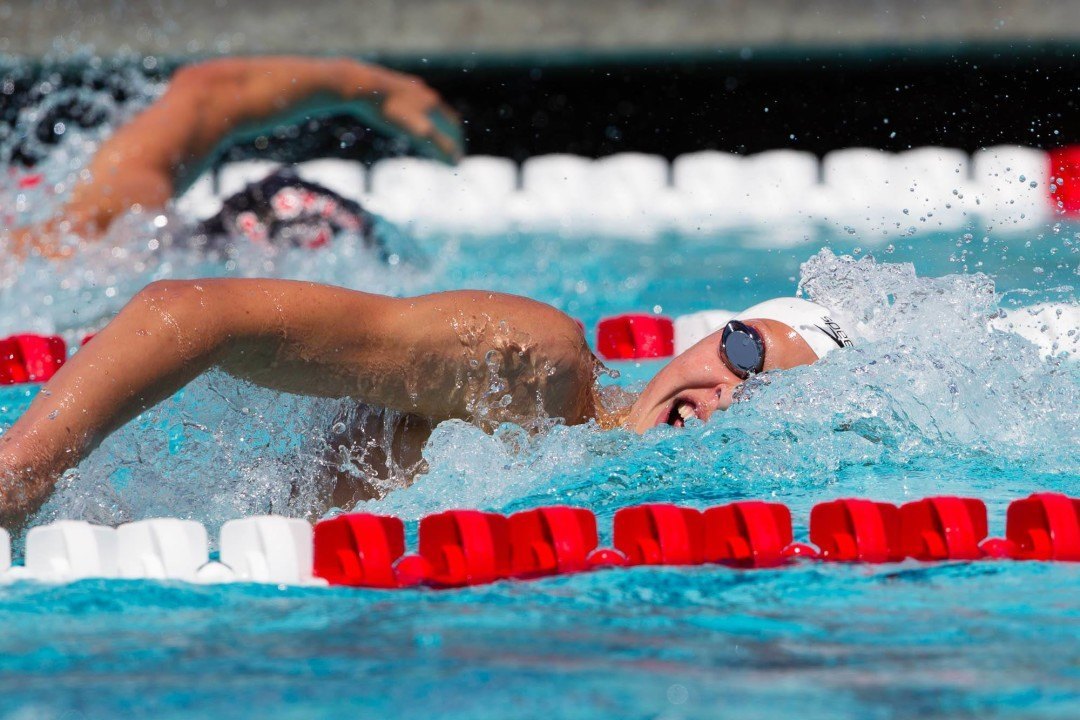 Justin Ress kicked off his NCAA career with a pair of wins for the North Carolina State Wolfpack on night 1 of the All-North Carolina Invite. Archive photo via Tim Binning/TheSwimPictures.com

Justin Ress kicked off his NCAA career with a pair of wins for the North Carolina State Wolfpack on night 1 of the All-North Carolina Invite.

One of NC State’s top incoming recruits, Ress was part of the winning 200 free relay to open the night, then took home the 500 free title in the very next men’s event.

Live results appear to be off on the official times of the relays, but NC State’s A and B teams went 1-2 in the 200 free relay, with Ress anchoring the A squad that picked up the win. Swimming before Ress on the relay were Scott Johnson, Simonas Bilis and Soeren Dahl.

One event later, Ress broke the meet record with a 4:31.46 in the 500 free, beating teammate Adam Linker‘s 4:31.55. Linker and Austin Snyder were under the meet record for NC State.

The Wolfpack would win 9 of 10 events on the night in a dominating showing. On the men’s side, senior Ryan Wilkerson took the 200 IM, going 1:52.13 to break a meet record of his own.

A freshman-senior combo also paired up to take those events on the women’s side for NC State. Senior Michelle Craddock took the 500 free in 5:01.18, just beating Davidson’s Elise Lankiewicz by about eight tenths for that title.

One event later, rookie Lindsay Morrow got her first NCAA win with a 2:05.56 touchout of teammate Kayla Brumbaum in the 200 IM.

Morrow also helped the 400 medley relay pick up the win in 3:47.38, leading off in a 56.68 on backstroke. Joining her were Maddie Witzke, Ashlyn Koletic and Krista Duffield.

The individual 50 free went to NC State’s Lotta Nevalainen in 23.45. She led a 1-2-3-4 sweep of Wolfpack members, with Labonge and Courtney Caldwell tying for second ahead of Kerr.

The lone non-NC State winner was Gardner-Webb’s Nathan Lile, who won the men’s 50 free in the tightest race of the night. Lile went 20.83 to beat out NC State alum David Williams and current NC Stater Scott Johnson by just .01. Williams graduated last season but competed at this meet as an unattached swimmer. Johnson is a junior and should be in the hunt to replace Williams on NC State’s free relays.

Also competing in that event was pro Eugene Godsoe, a former Stanford swimmer who now represents the U.S. internationally. Godsoe recently announced he’d be moving from the West Coast to train with NC State in the leadup to the 2016 Olympic Trials.

NC State closed the night with a 1-2 in the 400 medley relay on the men’s side, getting a 3:16.81 from their B relay, which won the event. Andreas Schiellerup, Derek Hren, Ryan Held and Joe Bonk made up that relay, with Bonk splitting 43.91 in his first race for NC State after transferring in from Virginia Tech. Held was 47.95 swimming fly.