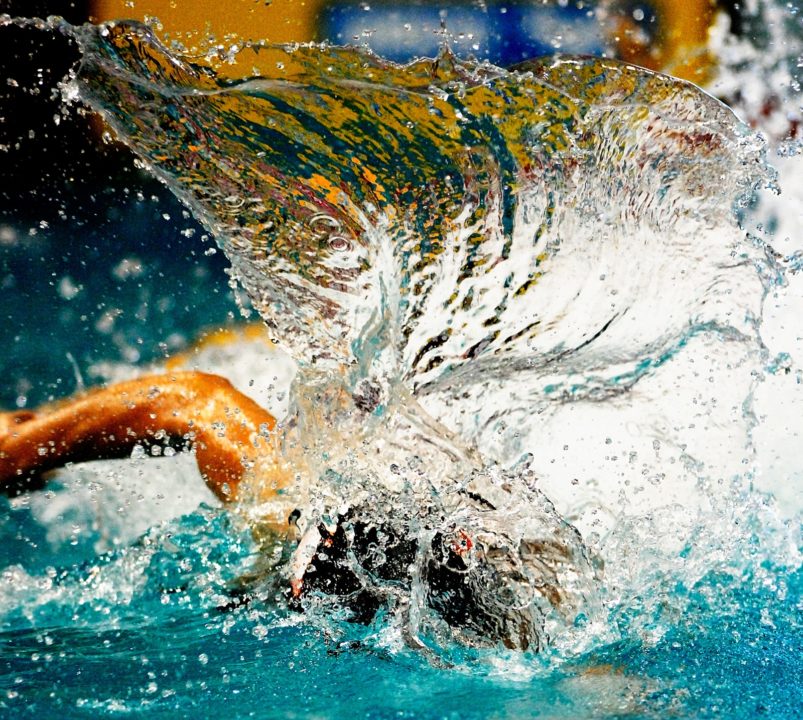 Shaine Casas, Drew Kibler, and Carson Foster each had swims that ranks them among the top ten performers ever in their respective events.

Freshman freestyler David Johnston continued to impress at Texas’s season-opening intrasquad meet. The rookie dropped three seconds for an 8:55 to win the 1000 free.

Junior Daniel Krueger followed up his 50 free win yesterday with the sprint sweep today. Krueger was 42.07 to win handily over junior classmate Drew Kibler. Krueger was 41.99 to win this event at this same meet a year ago. Kibler didn’t swim this race last year, but was 43.32 today. That’s a nice time for him – last year, Kibler was just 44.2 in the month of October.

Yesterday’s standout Caspar Corbeau was back to complete the breaststroke sweep today. Corbeau was 1:53.48 to win the 200 breast. That’s about 1.4 seconds off a career-best for Corbeau. He won this event last year, but was only 1:55.49, so the early showings from Corbeau have to be exciting for coach Eddie Reese.

Sophomore Jake Foster was second in 1:56.53, a few tenths off his time from this meet last year.

Freshman David Johnston continues to look like a recruiting steal for Texas. After smashing his career-best with a 4:16 in the 500 free yesterday, Johnston took three seconds off his 1000 free to win in 8:55.31.

Johnston had been 8:58.35 last December during his senior year of high school. Before that, though, Johnston was just 9:21 as a junior. He’s dropping time at an incredible rate, and it shouldn’t be long before we get to see Johnston go after his own personal best of 14:51.42 in the mile. That’s the fastest mile of any incoming freshman nationwide, and was set at the same Winter Juniors meet where he was just 8:58 in the 1000.

Junior Alex Zettle was also under nine minutes. His 8:58.54 was right on the cusp of a career-best. Zettle was 8:58.33 at last year’s Minnesota Invite in December. He’s qualified for NCAAs in each of his two seasons and was seeded 15th in the 500 free heading into last year’s meet, before it was canceled amid the coronavirus pandemic.

Carrozza’s lifetime-best is just 1:34.37, so he was within eight tenths of a second of a career-best in a very solid swim.

Alvin Jiang won the 100 back yesterday, and he made it a double with a 46.03 100 fly win today. That’s a tick faster than his 46.05 winning time from last year. The senior is proving an impact addition for Texas, and his win this year was by a wide margin of over a second and a half.

Freshman Carson Foster joined a long list of double-individual winners so far this week. Foster went 3:41.32 for a huge 400 IM win. Foster is the top incoming freshman in the nation, and already starred with a 200 IM win yesterday. His older brother Jake was second in 3:44.49.

Last year’s intrasquad did not feature a 400 IM for a year-to-year time comparison between Texas swimmers. But that 3:41 from Carson Foster is a truly outstanding time for October. Last year, no NCAA man broke 3:42 through the end of November, even including the first wave of mid-season invites. It wasn’t until the Minnesota Invite that a man broke 3:42, and even then, there were only three men to do it: Jake Foster (3:40.71), Texas’s Braden Vines (3:40.09) and Cal’s Trenton Julian (3:40.05).

Vines has not yet competed this week and is a notable absence for Texas. He does still appear on the team’s roster, though.

Goodell is a legend.
https://www.youtube.com/watch?v=PFjpMUp6A14

And just reminds me how much of a shame it is that UCLA no longer has a men’s team.

He swims masters, which is amazing he still has an appetite for training considering how brutalized he was in training back in the day.

All the finalists in that Olympic final race were mere boys. 16-17 for the most part, right

Forgot that Vladimir Salnikov, another legend, was in lane 8 of that race…

Absolutely remarkable swimmer. If I’m not mistaken, Goodell’s winning 1500 freestyle at the 1976 Olympics would have finaled at every 1500 since, save one. He was way ahead of his time. In fact his race is the only one that still stands today as competitive, far as I know.

Goodell’s 15:02.40 is faster than at least the 8th place time at every Olympics except for 2012 – however, it’s actually taken sub-15 to qualify since 2008. You’re right that no other time from 1976 is still internationally competitive today (not even from the East German women).

You’re absolutely right. I was just thinking other winners. But Hackett is still the 15-16 NAG record holder with that time.

Who knew that Brian Goodell would be trolling UT men’s swimming today?

F’s in the chat isn’t trolling.