Fraser-Holmes Reportedly Scratches 200 IM To Give Slot To Another 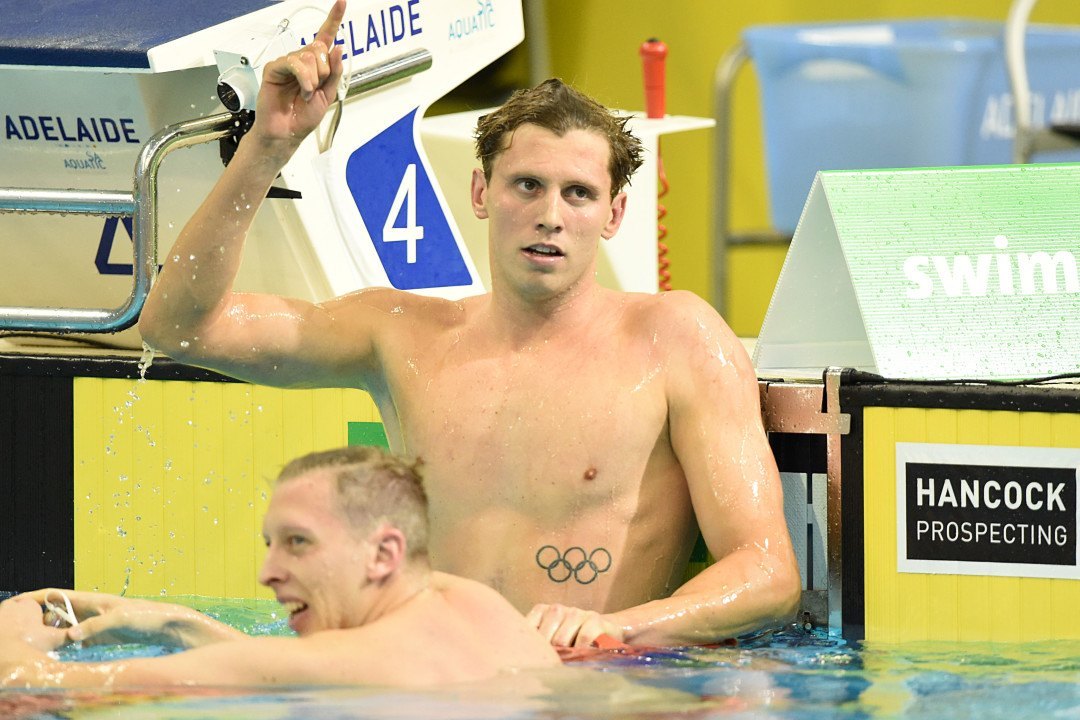 News from Australia is that Thomas Fraser-Holmes, having already qualified for 3 Olympic events, will opt out of the men's 200m IM Final to enable another dream to be achieved. Archive photo via 0Courtesy of Swimming Australia

Thomas Fraser-Holmes is having the meet of his life while competing at the 2016 Australian National Championships, the competition which serves as the nation’s Olympic Trials.

Through 5 days of competition, Fraser-Holmes has already successfully added his name to the Aussie Rio roster in 3 events, giving the 24-year-old Miami Swimming Club athlete reason, at least in his mind, to relinquish his spot in the men’s 200m IM final scheduled for tonight.

‘THF’ kicked off the Trials meet with a victory in the men’s 400m IM event on the very first night, stopping the clock and earning the gold in a time of 4:11.09. Then the swimmer earned a tie for gold in the men’s 200m freestyle event, touching the wall in the same time as teammate Cameron McEvoy (1:45.63) to earn an individual berth, as well as a spot on the men’s 800m freestyle relay.

Headed into Tuesday’s finals, TFH was situated as the top seed in a mark of 1:57.92 in the 200m IM, Aussie sources are reporting that Fraser-Holmes will be scratching out of the event. According to social media, he will be opting out of the 200m IM final to give the racing opportunity to another Aussie swimmer, saying he doesn’t want to “take away someone else’s dream.”

@tomfraserholmes is out of tonight's 200IM final, already qualified in 3 events & doesn't want to "take away someone else's dream'' #niceguy

Fraser-Holmes’ absence from the final bumps 9th-place finisher James Traiforos into the final. Traiforos, who is just 19 years old, earned a semi-final time of 2:02.96. He swims for Trinity Grammar, the same club at which Kenneth To trains, although To had previously scratched the 200 IM semi to instead focus on the 100m freestyle.

They’ve set the qualifying time at 1:58.54 and the fastest behind him was James at 2:00,4. I hope someone else gets a spot as a result, but I’m not optimistic.

That’s the dumbest thing ever. Australia won’t get 2 qualifiers in the event… He doesn’t want to swim in because he has no chance at a medal so he’s pulling out now

Its not dumb at all. There is certainly no altruism involved but just a calculated judgement that whilst he will qualify; he is not likely to be competitive in this event and he already has 2 individual events and 1 relay on his slate for Rio. Why waste the effort ?

Why swim the final knowing he won’t swim it in Rio even if he qualifies. Isn’t it better to give the 9th finisher chance to swim in the final of Aussie trials rather than wasting a final spot?

If he had swam final and got 1st ir 2nd could he still give up his spot or would Australia swimming force him to swim it?

No, they can’t. Had he gone through the whole process THEN decided “I don’t want to swim this”; he would have not have won any friends (both amongst officialdom and fellow swimmers) by preventing somebody else from potentially qualifying.

If there are no qualifiers; then since he actually has a qualifying time they may ask him whether he wishes to reconsider but he is under no obligation to say yes.