Four Storylines To Watch At The Canadian Swimming Trials 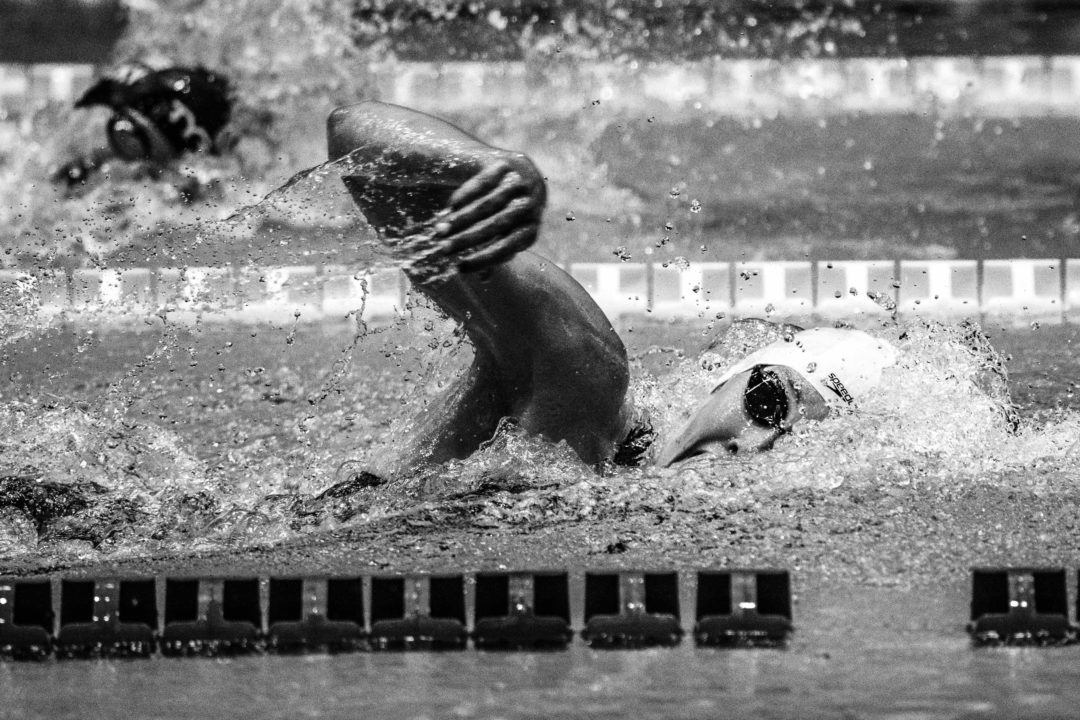 Check out the top storylines to follow during the 2019 Canadian Swimming Trials. Archive photo via Mike Lewis/Ola Vista Photography

The 2019 Canadian Swimming Trials are set to go off on Wednesday, with athletes competing for spots on all of the major international meets this summer including the World Championships.

Below, check out four storylines to follow throughout the five-day meet:

Oleksiak Back In Action

Penny Oleksiak will be back in action vying for a spot on the Worlds team after she withdrew from last summer’s Pan Pacs. The four-time Olympic medalist is entered in six different events for the meet, including the 100 free and 100 fly, the two individual events she won medals in at the Rio Games.

Following her breakout Olympic campaign, the 18-year-old followed up with a strong 2017 Worlds but was a bit off of those times at the 2018 Commonwealth Games. Facing a very strong field this week, it will be interesting to see what kind of form she’s in.

As was outlined in this article, there will be many swimmers coming off of the NCAA Championships who will be competing in Toronto. The women will have had a week and a half to prepare, while the men will have had only a few days as their NCAA meet only wrapped up Saturday night.

Taylor Ruck, who will be seeking to qualify for her first LC World Championships, is coming off an electric performance as a freshman for Stanford, and is also riding a hot streak in the big pool. She won a record eight medals at the Commonwealth Games last year and then followed up with five at the Pan Pacific Championships, including beating American Katie Ledecky head-to-head in the 200 freestyle.

For the men, there is 2016 Olympian and 2017 World medalist Javier Acevedo, along with James Guest, Ruslan Gaziev, and Will Pisani.

Short course yards and long course metres are obviously entirely different, so peaking for the two back-to-back is not going to be easy. It will be interesting to see how these swimmers manage it.

Kylie Masse headlines an incredibly stacked women’s backstroke field, as qualifying for the team will be her first step in trying to successfully defend her world title in the 100 back. Despite losing her world record to Kathleen Baker last summer, she has gone undefeated in major finals since the Olympics. Her 200 has also come a long way in a short amount of time, now having been sub-2:06 twice and ranking #1 in the world for the 2017-18 season.

Ruck is another one of the world’s best in the discipline after ranking fourth in the 200 and sixth in the 100 last season, but the talent doesn’t stop there. Kayla Sanchez and Danielle Hanus are both seeded under the FINA ‘A’ cut in the 100 as well, and Madison Broad and Jade Hannah aren’t far off. MacNeil is also a bit of a dark horse in this event after placing sixth at NCAAs.

In the 200, Kennedy Goss and Zavaros join Masse and Ruck under the ‘A’ standard in terms of seed time, while Broad and Aela Janvier are only tenths off.

Who Will Step Up For The Men?

Entering the meet there are no Canadian men seeded under the FINA ‘A’ standard in 12 out of 17 events. Swimmers will need to reach this standard in order to qualify individually for Worlds.

Markus Thormeyer, Yuri Kisil, and Mack Darragh are the only three who are under, so the door is open for others to have a big showing. Acevedo is the other who, if he’s on good form, should be able to get back under the time in the 100 back.

The “Management” of swim Canada have created several avenues to select swimmers. If they stick my the “A” Standard very few Male swimmers will qualify.

Just want to see Ruck get that Trials monkey off her back. Hope to see her in brilliant form and leading this team into Worlds. Eager to see Oleksiak round back into world beating form. Is there any word on Sarah Darcel? I’m going to be glued to CBC starting tomorrow morning and hope to get out to TPASC at least for the finals on the weekend. Good luck to all & Go Canada!

CBC is streaming this meet. With the great-voiced Chris Hindmarch-Watson likely announcing, their meets are always enjoyable & have kind of a homey sense to them. https://www.cbc.ca/sports/olympics/aquatics/live-stream-team-canada-swimming-trials-1.5078835

Thursday should be a fun day …

The men’s 100m free and 100m breastroke are the legs Canadian men will likely swim on the mixed medley relay – so it will be good to see how they do here. And, as mentioned earlier, hopefully the men can qualify a relay.

On the women’s side, with the exception of Masse (the 50m back is on the schedule, but I don’t see her entered) almost all of the bigger Canadian names are swimming.

Ruck/Oleksiak in the 100m free will be interesting –… Read more »

All of the races will be pretty interesting.. We will see if Oleksiak is 100% and how Ruck is LC after a great first ncaa

Does anyone know where Penny Oleksiak has been training? I know she was down with Florida last year.

Montana justice champagne is about to tear it up. Too bad he’s slow at 25’s underwater.

Races to watch…w100Back day 1 event 1. Ruck v. Masse. Masse is so consistent while Ruck might just beat her….or miss “A” final. W100Fly. Oleksiak-RSmith-MacNeil Sadly someone will be without a chair when music stops.

Canada’s worlds team is shaping up to be smaller than most. With women like Ruck, Pickrem, Sanchez, Olekskiak potentially qualifying in 3-5 individual events it will block many out. On men’s side I sure hope they qualify their relays otherwise it could be an even smaller team next year.