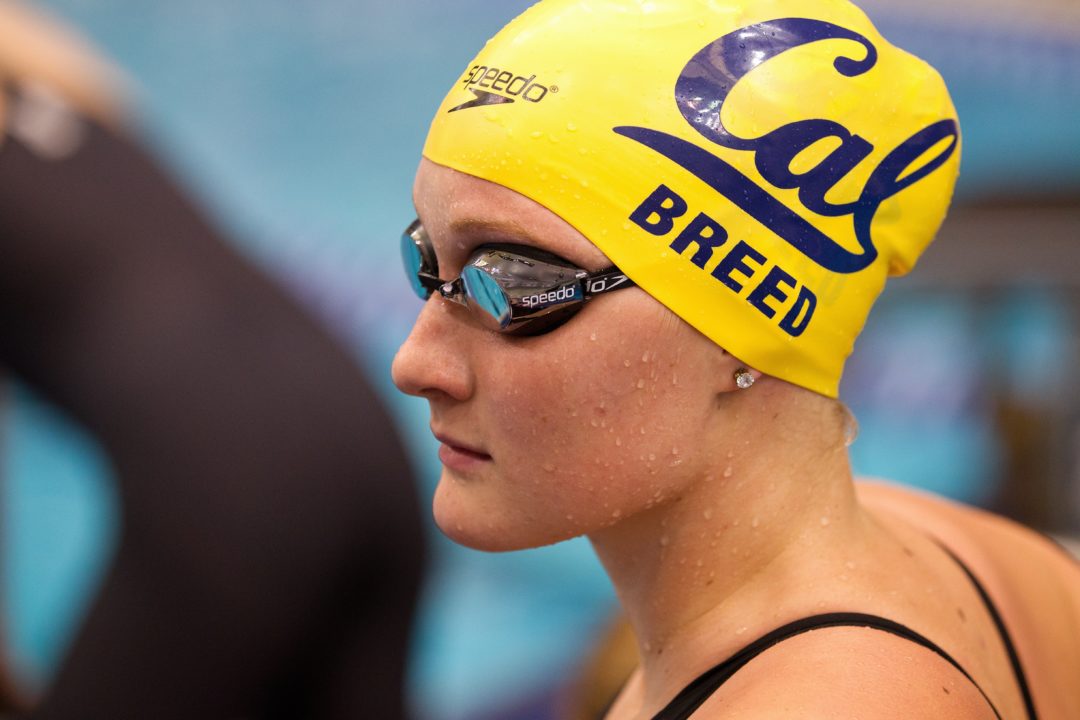 Former US National Teamer and Cal Bear Catherine Breed became the 5th woman to swim across Monterey Bay, finishing the 25-mile swim in under 13 hours. Archive photo via Cal Berkeley

Former Cal swimmer and US National Teamer Catherine Breed has become the fifth woman to complete the 25-mile swim across Monterey Bay.

Breed completed the swim in 12 hours and 53 minutes, which broke the record for the fastest swim across the bay held by Patti Bauernfeind since 2014.

With the completion of the swim, Breed joins Bauernfeind, Cindy Cleveland (1980), Kim Rutherford (2014) and Amy Gubser (2017) as the only women to complete the swim.

Breed began her swim at 9 pm on Monday, September 21st, opting to swim through the night in order to avoid heavier afternoon winds that would cause choppy waters.

After her swim, Breed recalled, “I couldn’t hear anything and it was so black, so I couldn’t see anything. It was a weird place to be with no senses.”

She then continued to swim through the night, until the challenges of the morning met her, which included thick morning fog, jellyfish, and whale poop. The jellyfish proved to be the hardest challenge, as Breed was stung a total of 55 times during her swim.

Despite these challenges, Breed reached San Carlos Beach in Monterey just before 10 am on Tuesday, falling to her knees in exhaustion and relief.

“I was proud of myself for breaking the record and, honestly, I was just relieved to be out of the water,” Breed recalled.

This swim isn’t Breed’s first record-breaking open water swim. In July, she took 45 minutes off the previous women’s record for a round trip swim to Angel Island in the San Francisco Bay, finishing the 10-mile swim in 4:45:50.

At Cal, Breed was a multi-time individual NCAA scorer.

Jelly fish stings are bad…55? I would have passed out. This girl knows how to have a good time. 🥴

Awesome, congrats! What kind of water temperature was that?

My guess would be somewhere around 57-59 degrees…brrrrrr

That’s amazing! What an incredible performance. She is made of iron. Wow!