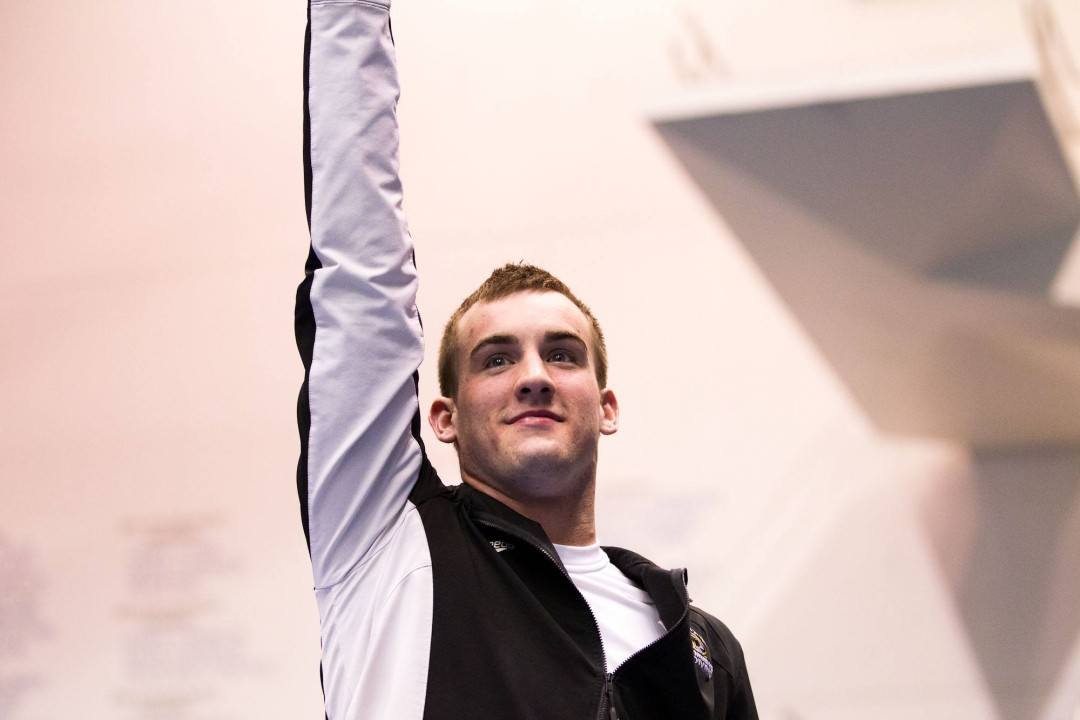 2013 SEC Diver of the Year has received a two-year suspension from FINA. Archive photo via Tim Binning/TheSwimPictures.com

Former University of Missouri diver David Bonuchi has received a two-year suspension from FINA beginning on July 21st, 2013 and running until July 20th, 2015.

The wording that FINA used to announce the suspension is very precise and interesting in what it says and what it doesn’t say. Rather than announcing a positive test, FINA instead says that they “discovered that during the period of the 15th FINA World Championships” that Bonuchi “used a prohibited substance Amphetamine…without any valid “TUE”.”

FINA confirmed that the “discovery” was not found through a FINA doping test. FINA, instead, was notified by their insurance carrier of the positive test after Bonuchi visited a hospital at the 2013 World Championships. Further details about Bonuchi’s hospital visit were unavailable because of privacy reasons.

Bonuchi has completed his eligibility at Missouri as of the 2014 NCAA Championship meet, and since has been in Florida training. He is the most decorated diver in Missouri history with 10 first team All-America awards: the most in program history. He was also named the SEC Male Diver of the Year in 2013 and is a three-time SEC Champion.

While FINA’s decision is backdated to July of 2013, Bonuchi’s NCAA results should be unaffected, as several prior WADA cases have elicited no response from the NCAA. The NCAA is not bound by FINA’s decisions as they are not a signatory of the World Anti-Doping Code.

Missouri has not yet responded to a request for comment, and we have been unable to contact Bonuchi. FINA’s full announcement is below.

FINA discovered that during the period of the 15th FINA World Championships held from July 19, 2013 until August 4, 2013 in Barcelona (ESP), the diver David Bonuchi (USA) used a prohibited substance Amphetamine (Class S.6.a Non-Specified Stimulant) without any valid TUE (Therapeutic Use Exemption) in place and therefore violated the FINA DC Rule DC 2.2.

The FINA Doping Panel decided according to the FINA DC Rule 10.2 to impose on the athlete a period of two (2) years ineligibility, starting on July 21, 2013 and ending on July 20, 2015, for his first anti-doping rule violation.

This is the only athlete in Olympic history who has banned without a valid TUE. There is definitely more to this story. Interesting that the drug test taken at time of competition (required at this level) showed there were no drugs in his system. This is a sham by the hospital due to possible non-payment (they were since paid) and FINA ran with it for other reasons. However, because of legal issues you will never know the truth. David Bonuchi NEVER tested positive for drug use in all his time competing as an athlete for USA Diving and the NCAA.

I’m not sure I understand your point. There have been literally thousands of athletes in Olympic history banned without a valid TUE. In fact, not having a valid TUE is a reason to be banned. Maybe you meant to say something else?