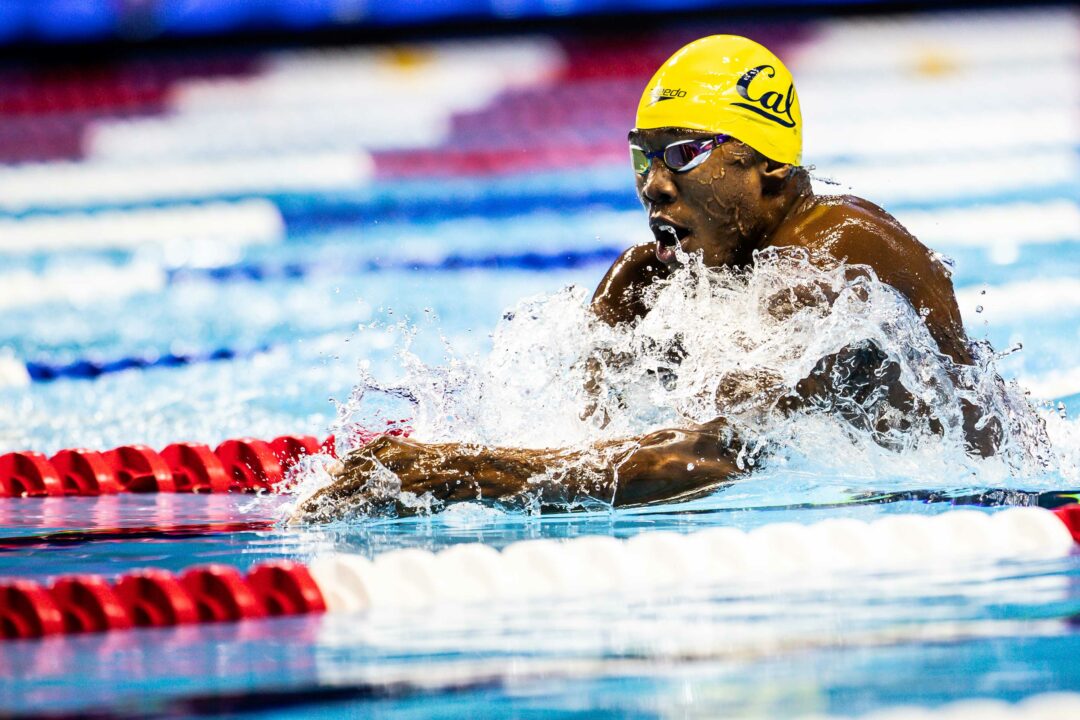 Led by sophomore Emma Sticklen, who swam 1:52.47 in prelims, Texas had three swimmers go 1:52s on Saturday. No college team has ever done that before.

Swim fans are in store for a bevy of great races tonight in Minnesota as the annual Minnesota Invite closes out with its last session.

Some of the top programs in college swimming will come together this week to compete at the Minnesota Invite in Minneapolis, including the Texas Longhorns and Cal Golden Bears, the top two men’s teams in the nation last season and the third and fourth-ranked women’s schools.

The loaded competition will also feature the Michigan Wolverines, Wisconsin Badgers, Arizona Wildcats and Harvard Crimson to go along with the host Minnestoa Golden Gophers.

Here are five races to watch at the meet:

Michigan senior Maggie MacNeil will be among the meet’s top attractions for swim fans after she’s been lighting up the pool every time she hits the water in recent months. MacNeil won Olympic gold in the women’s 100 butterfly at the Tokyo Olympics, tore things up at the FINA World Cup in Berlin, and then returned to the Wolverines in time to post multiple nation-leading times at the SMU Classic in October.

While highlighting races to watch is typically geared more towards intriguing matchups than an event where the winner seems like a forgone conclusion, the women’s 100 fly gets an exception here because we have yet to see MacNeil race the event in NCAA competition this season.

Her last yards swim in the event was the all-time record 48.89 the Canadian native produced at the 2021 NCAA Championships, and so much has happened since. At the SMU Classic, MacNeil recorded respective times of 21.78, 48.73 and 51.09 in the 50 free, 100 free and 100 back, respectively, showing that she’s on good form, and her season debut in the 100 fly feels like it has the potential to be explosive.

MacNeil will face off with Cal’s Izzy Ivey, fourth at the 2021 NCAAs in 50.68, along with Texas’ Olivia Bray (seventh at NCAAs) and Emma Sticklen (11th at NCAAs), but this race is more about seeing the fastest swimmer ever in action than it is about who she’s going head-to-head with.

Another swimmer in the event is Michigan freshman Letitia Sim, who will be one to watch in both female breaststroke races and the 200 IM.

Two weeks ago, Tennessee’s Ellen Walshe established the top 100 fly time in the nation in 50.24—becoming the second-fastest freshman of all-time behind MacNeil—and Stanford first-year Torri Huske wasn’t far behind at the NC State Invite in 50.30.

We’ll see if MacNeil can make a statement and become the first swimmer sub-50 this season. There were no mid-season invites last year due to the pandemic, but in her first two seasons at Michigan, MacNeil respective clocked times of 49.97 and 49.26 during invite season.

The men’s 100 free will feature a ton of heavy-hitters, from experienced seniors to incoming freshmen looking to make their presence felt.

Beyond those three, 2019 NCAA champion Dean Farris is back after two years away from college competition and will have an opportunity to remind everyone he’s a force to be reckoned with.

Adding to the mix will be Cal freshmen Robin Hanson, a sub-49 LCM 100 freestyler out of Sweden, and Jack Alexy, who was the fastest domestic recruit in this year’s high school class with a best of 42.63.

We’ll also see Texas’ grad senior Cameron Auchinachie, a former member of the University of Denver who owns a best time of 41.81 from the 2019 NCAAs and has been 43.9 this season.

At the first round of invites we saw two swimmers, Stanford’s Andrei Minakov (41.69) and Virginia Tech’s Youssef Ramadan (41.98) crack 42 seconds, and it seems we’ll see a few more this week in Minneapolis.

Two years ago at the Minnesota Invite, the men’s 100 breaststroke produced an incredible race that saw five swimmers crack the 52-second barrier, with Gopher Max McHugh (51.35) edging out Cal’s Reece Whitley (51.50) for the victory.

When the two finally met at the 2021 NCAA Championships, it was McHugh sweeping the breast events, with Whitley falling to third in the 100 while taking second in the 200 despite having been faster earlier in the season.

While the 200 appears to be the closer race on paper between the two come NCAAs, the 100 at this week’s invite has added intrigue with the other men who will be in the field.

We’ve now seen eight men crack the 52-second barrier so far this season, with USC’s Trent Pellini holding the top time at 51.28. No doubt that McHugh and Whitley will be aiming to surpass that time, but their main objective will be to send a message that they’re the man to beat come NCAAs. However, if the two focus too much on another, one of the other contenders to slip through and snag the victory.

Along with MacNeil, Wisconsin sophomore Phoebe Bacon also comes in as a reigning individual national champion on the women’s side, and she’ll be going head-to-head with fellow second-year Isabelle Stadden of Cal in the women’s 200 backstroke.

The women’s 200 back has received a shot in the arm this season with the arrival of Stanford’s Regan Smith, the long course world record holder who posted the fastest time in the country at the NC State Invite in 1:48.32.

2021 NCAA runner-up Rhyan White (1:49.73) was also sub-1:50 at the Tennessee Invite, so this race will serve as a measuring stick for Bacon and Stadden to see where they’re at in relation to the NCAA’s best midway through the season.

The field will also include Texas’ Julia Cook, an NCAA consolation finalist last season, and Cal’s Alicia Wilson, who finished the season ranked 16th in the country with her 1:52.67 from the 2021 Pac-12s.

The women’s 500 free brings a ton of intrigue as we’ll get a glimpse of Texas freshman Erica Sullivan in her first (semi) tapered swim in the NCAA.

Sullivan, who owns a best time of 4:34.07 from April 2021, has some compelling contenders on her hands, including graduate senior teammate Evie Pfeifer, last season’s NCAA runner-up in 4:35.02.

The field also includes Cal’s Ayla Spitz, who was fifth at the 2021 NCAAs, Wisconsin freshman Paige McKenna, and Michigan’s Kathryn Ackerman, who swam a best time of 4:42.58 at the beginning of November. Cal’s Robin Neumann is another sub-4:40 swimmer in the field, having been 4:39 at three consecutive Pac-12 meets.

Arizona State’s Emma Nordin holds the fastest time in the nation this season at 4:34.87, with a total of nine women sub-4:40.

Grimm in the 2IM? Intrigued 👀👀

Initial post is still the eternal question. And Minnesota is actively trying to prevent anyone from getting the livestream, great marketing for swimming…

I swam at this meet in 2018. Too bad they didn’t invite club swimmers this year.

Deans swimming 5 races so those are the 5 races to watch, simple as that.

This is the meet where everyone learns the name “Gabe Jett”

I immediately went to the 100 fly to see if Julian was gonna give it a go and was sad to not see his name. I was a little relived when I realized it’s because he’s not swimming anything at all.

And no Bryce Mefford

I said Gonzalez might no show in Braden’s weekly round up show.
Big question, is there diving this weekend?

Diving passed, like I think Texas had their invite a few weeks ago for diving.

There is a THIRD reigning NCAA champ on the women’s side at this meet–Michigan’s Olivia Carter, reigning champ in the 200 Fly.