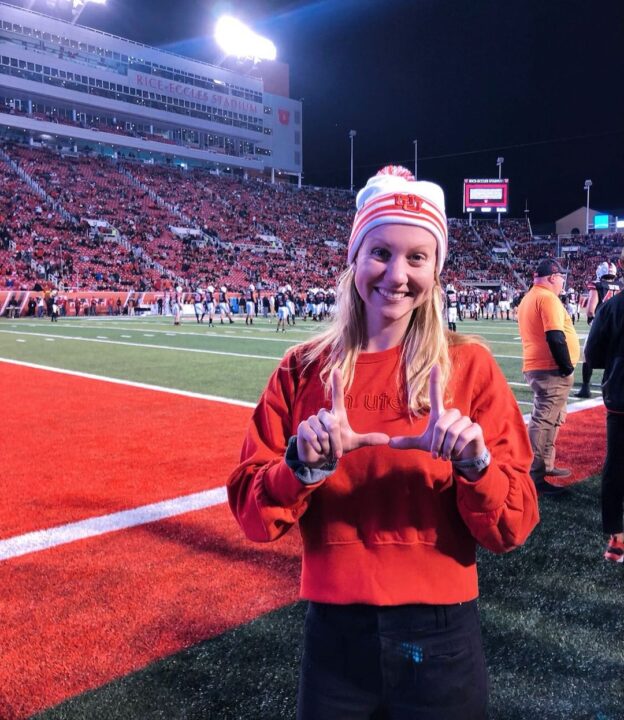 NCAA qualifier Summer Stanfield has transferred to the University of Utah and is expected to begin competition this semester.

Stanfield was one of 4 LSU qualifiers for the NCAA CHampionships last season, but entered the NCAA transfer portal early in the season, shortly after LSU associate head coach Steve Mellor resigned. Mellor was a holdover from the prior staff who was retained when Rick Bishop took over the team this year.

The other three, Hannah Bellina, Emilie Boll, and Katarina Milutinovich, all return for the Tigers this season.

She scored 21.5 points at the SEC Championships last season, which made her LSU’s highest-scoring swimmer (their divers carried the individual scoring load with a combined 119 points).

She joins a Utah team that finished 5th out of 7 teams at last year’ Pac-12 Championships. Her best time in the 200 backstroke would have placed her 6th at that meet, while her 200 fly would have put her 7th and her 200 IM would have put her 8th. Those rankings are expected to become a little tougher this season with Arizona State back competing, but Stanfield is still well within A-Final range in the Pac-12.

That means a projected 60-plus point impact for Utah, which was only 54.5 points behind USC last year for 4th in the conference.

Stanfield has at least two seasons of NCAA eligibility remaining, with the option for a third year at Utah if she takes advantage of the NCAA waiver granted for athletes who competed in the COVID-impacted 2020-2021 season.

Stanfield went to high school near Jacksonville, so this move will take her much further from home. In 2018, as a senior, she was the Florida 3A High School State Champion in both the 100 fly and 200 IM.