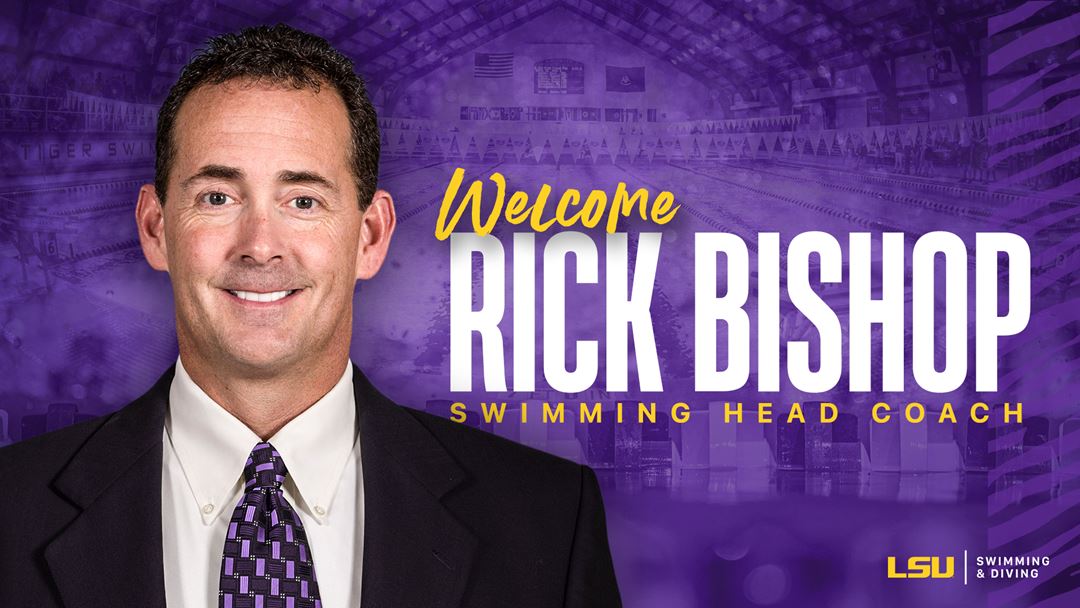 Rick Bishop, who has helped rebuild the women's program at Michigan into a national power, will take over as the new head coach at LSU. Current photo via LSU Athletics

Rick Bishop is bayou bound and will soon be announced as the next head coach of the LSU swimming & diving program, sources close to the program say.

Bishop, who has been a party-of-interest for several high profile collegiate coaching positions this offseason, has spent the last 8 seasons as an associate head coach at the University of Michigan. There, he helped lead the women’s program to 3 consecutive Big Ten Championships from 2016-2018 and back-to-back top 4 team finishes at the NCAA Championships in 2018 and 2019.

Among the swimmers who train primarily with Bishop are NCAA Champion, World Champion, and U.S. Open Record breaker Maggie MacNeil. Bishop is also the primary coach of Michigan post-grad Siobhan Haughey, who has broken a number of Hong Kong National Records and become a strong medal contender for this summer’s Tokyo Olympic Games.

Bishop leaves for Hong Kong on Friday morning for a pre-Olympic training camp and will travel to the Olympic Games with Haughey in July. Bishop has been writing the training for the National Team group in Hong Kong that includes Jamie Yeung and Ian Ho, who recently broke the Hong Kong record in the 50 free.

Bishop’s international appointments include as an assistant coach for the U.S. at the 2016 FINA Swimming World Championships in Canada and the 2017 World University Games in Taiwan. He also spent 2 years on the Brazilian National Team coaching staff, serving as an assistant coach at the 1995 World Championships in Rio and 1995 Pan American Games in Argentina. He led the Brazilian women’s team at the 1996 Olympic Games.

He also served as an assistant for Jamaica at the 1998 Pan American Games and the head coach for the Netherlands Antilles at the 2007 World Championships.

Prior to joining the staff at Michigan, Bishop spent 4 years working at USA Swimming working in the sport performance role. He also had stops as an assistant at Harvard (1988-91), the University of Memphis Tiger Swimming Club (1992-96), and with two of the most historic high school programs in the country: as an assistant at the famed Bolles School (1998-2002) as the head coach The Baylor School (2002-2006), and back at The Bolles School as the head coach in 2006.

Bishop replaces outgoing head coach Dave Geyer, who resigned from the program after 16 seasons with the Tigers, including the last 11 as head coach.

LSU rising junior Brooks Curry, the 2020 SEC Champion in the 100 free as a freshman, qualified for the U.S. Olympic Team last week by placing 4th in that event in Omaha. That makes him the first American Olympian in program history. Curry trains primarily in the sprint group with associate head coach Steve Mellor.

Bishop is the second assistant to leave the Michigan staff this offseason. Nikki Kett announced in early April that she would be stepping away from coaching to pursue a dryside career.

Why? I thought they stated they wanted an impact hire? This guy was recently Beaten out for the Houston job, past jobs before Michigan were quick stops at 2 prep schools during times of their worst performances historically speaking.

Unpopular opinion, LSU needed a warm body to coach swimming and this guy was available. This isn’t an upgrade from the past staff in any capacity.

I don’t know how this is going to impact the men’s team, but hard to believe there won’t be improvements to the women’s team in a hurry.

Strong hire, I hear he can move an unlimited number of spaces diagonally

Rick is a great guy and an incredible coach. Strong hire by LSU.

I wonder why he decided to leave suddenly, the Michigan women’s team seemed to be doing really well? A second coach leaving during the same season is always interesting for what will happen to the swimmers on the team, and if there was a reason why this is happening.

I don’t understand people who try to stir up drama about an assistant coach leaving for a head coaching job.

I mean, isn’t that the goal of a coach with ambition? Not that it’s the only path that can be considered successful, but we shouldn’t be surprised when a highly-successful assistant leaves to become a head coach, right? More money, more control, more etc.

Siobhan Haughey will be Olympic Champion this summer in the 200 free. That’ll be a nice feather in Rick’s cap.

You clearly don’t know who Ariarne Titmus is then…

You mustn’t know who Ariarne Titmus is then…

Wonder if he will be body shaming and bullying to some on this new team like at UMich??? Wonder if it will also be ignored like at UMIch. Ask the Girls who left on “medical leave”.

Does anyone want to shed more light on this comment?

with an accusation as this you really need to back it up with proof or keep it to yourself.

Maybe ask alumni who were asked to partake in a climate assessment run by administration about the team….

true statement ^ heard from multiple swimmers that he created a negative environment and would ignore certain girls. He would also gossip about other personal things with other girls on the team. Some were ignored for months at a time. Success doesn’t always mean it’s been done in the right way.

This is a strong hire for LSU. Rick will have an uphill climb with the poor facilities relative to SEC standards (and the looming cloud of potential NCAA sanctions against basketball and football), but LSU seemed to do more than just make an easy hire, which is always good to see in college swimming.

I agree. I think Rick will do a great job. He had really paid his dues, being at MI for 8 years as an assistant. About time he gets his chance at head coach. Hopefully, Mike Bottom can bring in someone good to replace him for women’s team. By the way, isn’t Mike Bottom up in his 60’s?? Wonder how long he will stay coaching?

what I understand seems that assistant already doing lots of work so he can go till 80s easily.