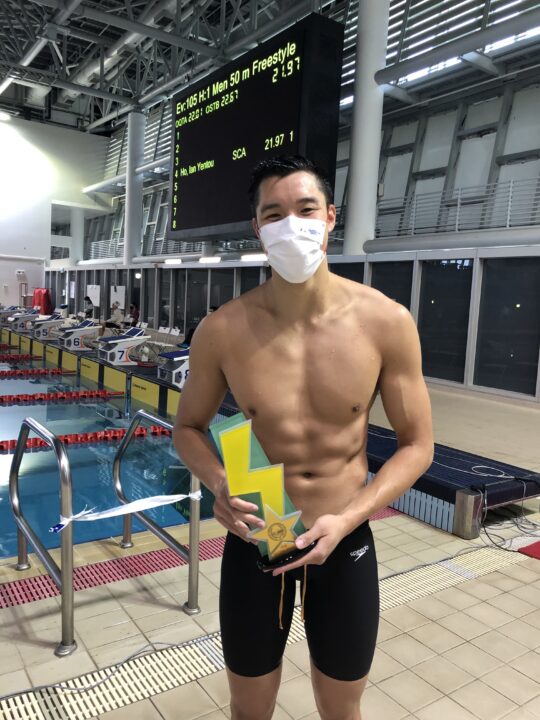 24-year-old Ian Ho became the first man from his nation of Hong Kong to ever get under the 22-second threshold in the 50m freestyle. Current photo via Hong Kong ASA

Racing by himself today at the Hong Kong LC Swimming Time Trial IV, 24-year-old Ian Ho became the first man from his nation to ever get under the 22-second threshold in the 50m freestyle.

After posting a heats swim of 22.03, already a personal best, the former Virginian Tech student-athlete ripped a big-time 21.97 to further establish himself as the king of sprint free in Hong Kong.

Entering this meet, Ho held the HK national standard at the 22.09 he logged in just May of this year. That painstakingly missed the FINA ‘A’ cut of 22.01 needed to qualify for the Olympic Games next month in Tokyo, Japan.

Flash forward to tonight, however, and the Michigan pro group ace got the job done with the first sub-22 second result of his career.

Ho is now just the 6th Asian man ever to break the 22-second barrier in this 50m free event.

There is no one, in my mind, more deserving of this honor than Ian Ho. This man is the most dedicated person I have seen, in and out of the pool, that I have ever had the pleasure of meeting in the sport of swimming. Congratulations, OLYMPIAN Ian Ho!!!

Also like the part where Hong Kong is referred to as its own nation. If it were only true in real life and for its people.

Sorry but Ian does not swim with Michigan Pro group. Ian left Blacksburg last March of 2020 to compete in Hong Honk at a meet and because of the Covid situation he stayed there with his family training with the Hong Kong National Team all the way until now.

how do you butcher the spelling of Hong Kong that badly the first lmao, but get it right the second

0
0
Reply
swimmerfromjapananduk
Reply to  JP input is too short

too harsh, allow it

if you somehow butcher a three letter name then that is a serious problem. I would go talk to a professional in that sort of field to get checked if I were you

As I understand it, there is a Michigan Pro group based in Hong Kong currently doing sets written by Michigan coaches. This includes Haughey, Yeung, etc.

Very Happy for you, your family and your past and present coaches. Big Hug from your Hokie Family and see you in Tokyo. Proud of you!

Congrats Ian! One of the hardest workers I’ve ever swam with, no one deserves this more.

Wow! Congratulations Ian! You earned it.