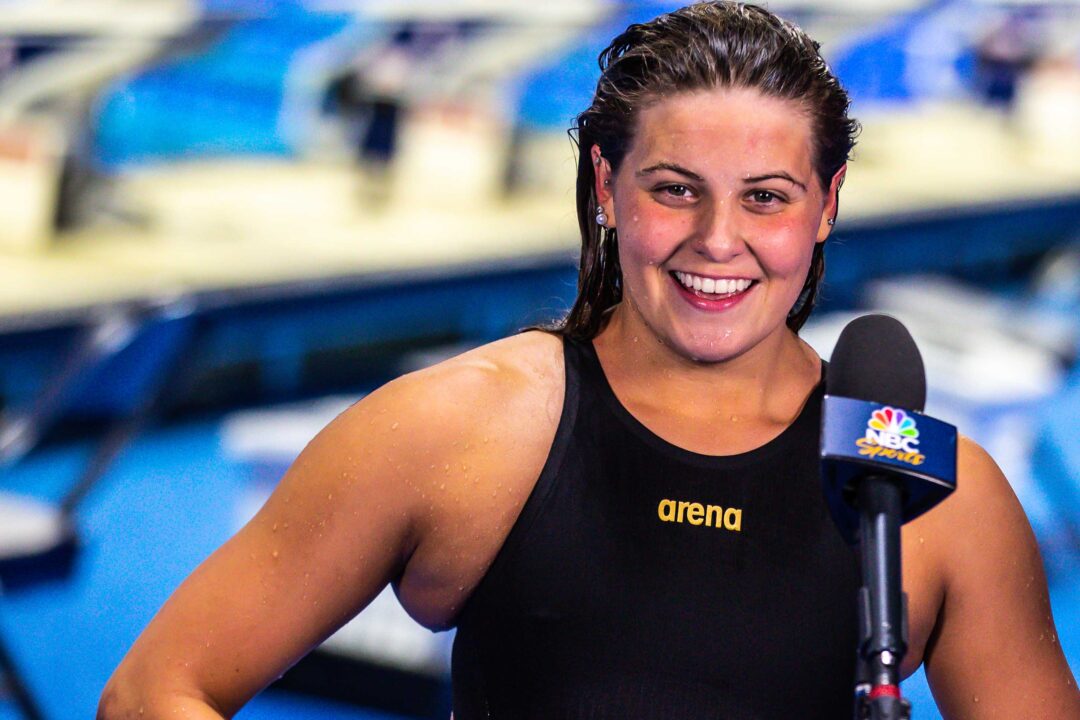 Led by sophomore Emma Sticklen, who swam 1:52.47 in prelims, Texas had three swimmers go 1:52s on Saturday. No college team has ever done that before. Archive photo via Jack Spitser/Spitser Photography

The women’s 200 fly on Saturday at the Minnesota Invite, which featured the defending NCAA Champion Olivia Carter from the University of Michigan, featured 4 of the top 6.

Between prelims and finals, Carter and a trio of Texas Longhorns established four of the top six times in the NCAA this season.

It turns out, a training group of that depth is unique in NCAA history.

The official NCAA times database maintained by USA Swimming dates back to the 2007-2008 season. In that time, 32 swimmers from 12 different schools have been 1:52.99 in the 200 yard fly in NCAA competition.

Only two swimmers prior to that time period were under 1:53: Natalie Coughlin of Cal and Kaitlin Sandeno of USC. (Plus Elaine Breeden, who is already captured in the 31 above).

So that means 34 collegiate swimmers in history have been under 1:53 in the 200 fly.

The swimmer who has done it the most is Stanford’s Ella Eastin, who was under 1:53 18 times in her four seasons on the Farm.

But never before have three of those swimmers from the same team done so in the same season.

This year, they’ve got three qualifiers in the 200 fly alone, with still half-a-season remaining.

Pash is just tough as nails, and Sticklen and Bray can give a master class on underwaters. 🤘

There is so much positive vibe surrounding Texas women’s program. Recruting is at the top level as well as team chemistry. Coaching is the first class. I enjoyed waching them swim at MN. Toughness of Emma Striklen, feistiness of Pash, underwaters of Bray, grace of Pfeifer’s freestyle and incredible pace and technique of Elendt’s breaststroke. Texas will win NCAAs within next 3-4 years.

As a side note, is Ella’s Eastin the best swimmer that never went to the Olympics? She was so dominant in the NCAA, but kept misfiring at trials (think she had the flu one year, then got COVID and retired if I remember correctly?).

I think you’d have to consider Hayley McGregory for that (honor?)

I don’t think she was ever sick at the Olympic Trials. In 2016, she said she got intimidated, but she was still 5th in the 200 IM. She had mono in 2018, which is what you’re probably thinking of. She still made the Worlds team in 2019, though. You’re correct about the retirement prior to Tokyo Trials.

Ooh, yeah, I forgot about Hayley McGregory. Two greats that most people will never know about, quite sad.

Assuming we’re excluding people who didn’t get to go due to the boycott, Mary Descenza has the best case on the female side imo, won a ton of NCAA titles and set a WR, which is still the American record. Kukors also set a WR but didn’t have the same level of success across a bunch of events.

On the male side, feels like the answer is one of the mid 2000s backstrokers who were shut out by the Piersol/Lochte/Grevers trifecta maybe? There were years where we had something like 11 or 12 of the top 25 in the world. Maybe Randall Bal?

But Kukors actually made the 2012 team…

How about Michele Griglione for that unwanted honor?

I was thinking the same thing about Texas women’s remarkable turn around so far this season compared to last. Also, just in this event alone, all 3 sub 1:53 200 fly teammates are around through end of next season, & their 2 sophomores having 2 more seasons after completion of this current season. Amazing. An interesting sidebar to this, albeit non-NCAA related rankings for women in the sub 1:53 range for the 200 fly: it was in April 1981- so over an amazing 40 1/2 years ago, a then 16 yr old Mary T Meagher won US nationals by almost 5 seconds in the first ever sub 1:53 200 fly, going exactly 1:52.99.

This is an incredibly niche statistic and I’m here for it.

I’m guessing Mitch Dalton learned a thing or two in his #ButterflyRevolution research.

In history with what? 😅