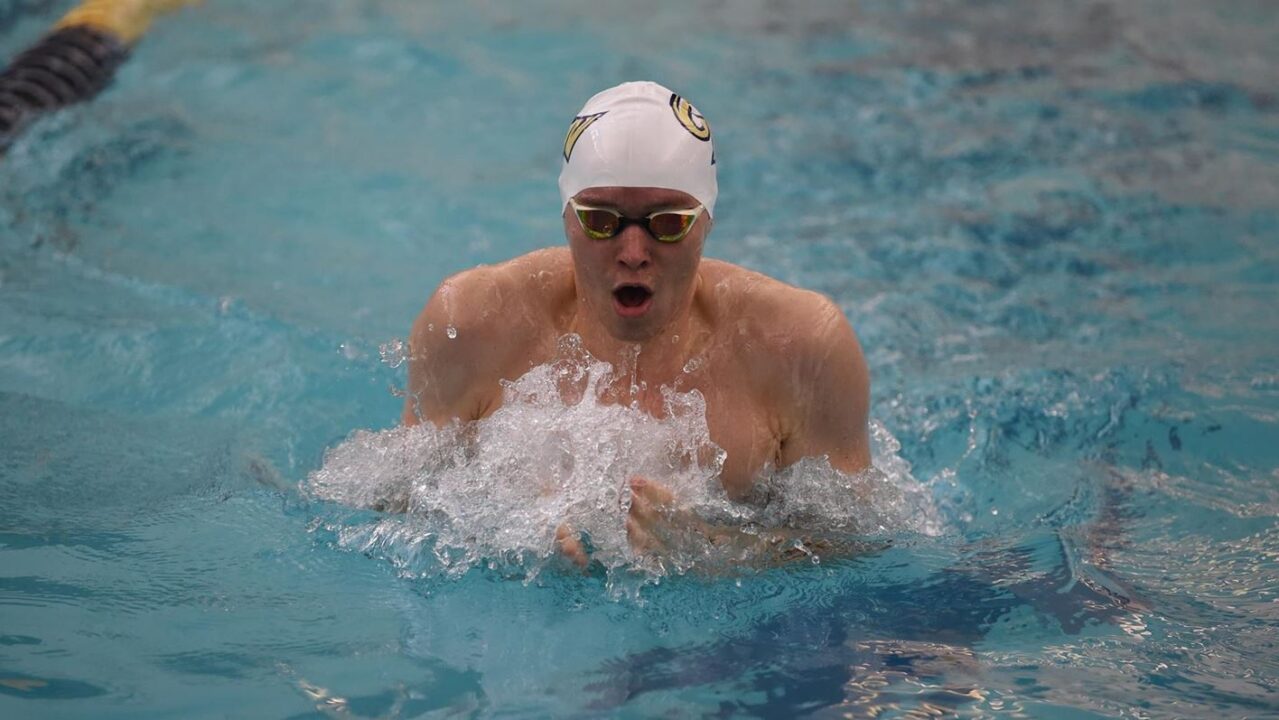 The Utah men started off the night strong, winning the 200 medley relay by almost two full seconds in 1:24.47, just two tenths short of the NCAA A cut needed to qualify for the NCAA Championships. The quartet included Andrei Ungur, Andrew Britton, Cooper Deryk and Finn O’Haimhirgin, the same four from Utah’s school record relay of 1:24.15 from last year’s NCAA meet, where they finished 15th.

George Washington sophomore Djurdje Matic, a native of Belgrade, Serbia, won the 100 fly in 45.72, breaking GW’s program record by more than a full second. That time also easily clears the NCAA B cut and is faster than the invited time from the last three years, putting the sophomore in great position after the midseason meets. Utah’s Ben Waterman, a junior from Albuquerque, New Mexico, finished runner up in 46.48, just off his lifetime best of 46.23.

Utah finished the session winning three straight first individual events. Their first win of the evening in the men’s 200 free, courtesy of freshman Marko Kovacic’s 1:35.61. One event later, his teammate, sophomore Jaek Horner, won the 100 breast in 53.04. Horner touched just ahead of Princeton junior Josh Brown, who settled for the runner up spot in 53.16. Utah’s final individual win came in the 100 back, where junior Andrei Ungur blasted a 46.06 to win by over a second. That time comes in under the NCAA invite time from last season.

The Princeton men won the final race of the evening, the 800 free relay, in 6:24.82. The relay narrowly missed breaking Princeton’s program record of 6:24.75 from 2009. Also notably, Princeton’s Raunak Khosla set a new Tiger program record in the 100 breast in the prelims of 52.45, but scratched the final in favor of the 400 IM.

The Princeton women kicked off the night with a resounding win in the 200 medley relay, touching first in 1:38.96. Their relay was led by Virginia Beach native Nikki Venema, who split 23.71 on the fly leg. Denver finished in second in 1:39.88, while Rutgers’ A relay was DQ’d.

The Tiger women then rattled off several individual event wins in a row following the relay, starting with sophomore Ellie Marquardt taking the 400 IM in 4:13.99. While Marquardt is best known for her distance freestyle prowess, that 400 IM clocks in less than a second off of her lifetime best of 4:13.15, which was set last spring at the TAC Titans Southern Zone Sectionals.

In the next event, Princeton junior Nikki Venema won the 100 fly in 52.64, chopping two tenths off of her lifetime best. That swim also clocks in just under last year’s NCAA invite time of 52.70, which should put Venema squarely on the NCAA invite bubble come March.

Rutgers junior Sofia Chichaikina broke through the Tiger dominance in the 200 free, as the Russian posted a 1:48.15 to take the win. Chichaikina turned in second at the 150 behind Denver’s Aysia Leckie, but outsplit Leckie by almost a half second on the final 50 to take the win by just .05. Leckie’s teammate, freshman Jessica Maeda won the 100 breast for the Pioneers in the next event, clocking in at 1:02.20. That swim comes 6 tenths off of Tigard, Oregon native’s lifetime best from high school.

Denver won the final individual event of the evening, with junior Natalie Arky posting a 52.96 to win the 100 back by a second and a half. That swim comes in just under last year’s NCAA invite time of 53.01 for the local product of Highlands Ranch, Colorado in Denver’s south suburbs.

The Rutgers women wrapped up the session by winning the 800 free relay in 7:22.41. The Scarlet Knights were led by Sofia Chichaikina’s 1:48.78 leadoff.