FINA: “No Current Detected” in Rio Pool at Any Stage of Competitions 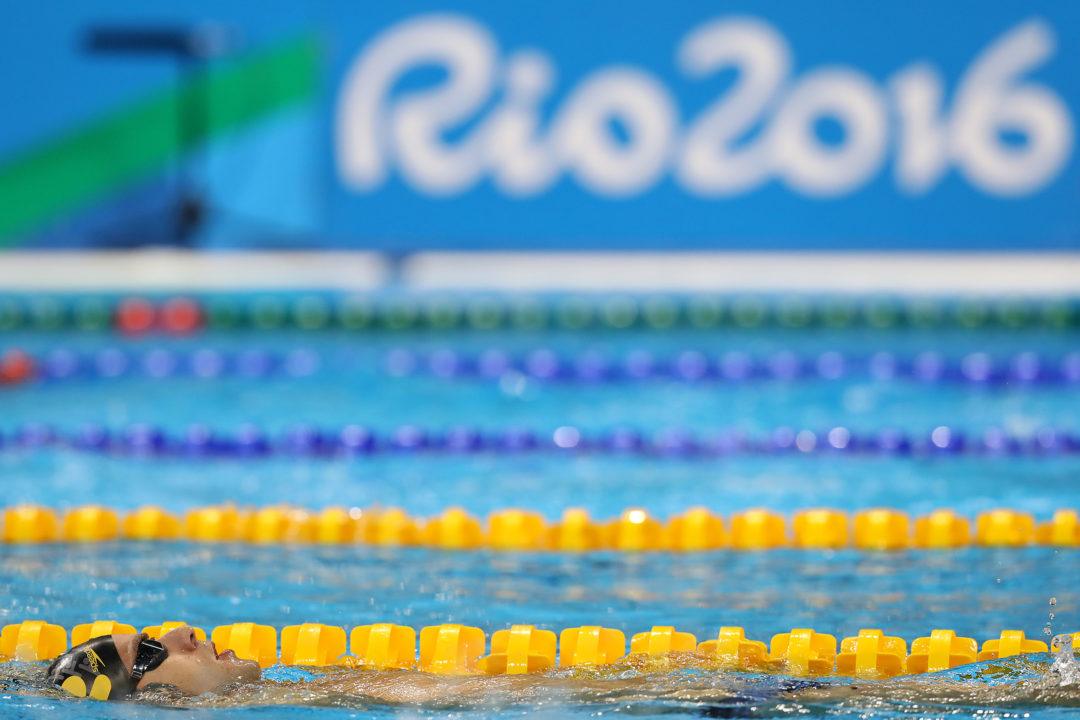 In response to journalism questioning whether swimmers in certain lanes had a boost in performance, FINA has expressed confidence that the Rio 2016 pool was current-free. Current photo via Satiro Sodre/SS Press

In response to a piece published in the Wall Street Journal suggesting that a current in the Rio pool favored sprinters in certain lanes and a statistical analysis by SwimSwam contributor Barry Revzin with similar findings, FINA has said that there was no current measured in the competition pool for the Rio 2016 Olympic Games.

FINA said it “received the reassurance that ‘no current was detected in the Olympic Aquatics Stadium pool, at any stage of the competitions.'”

The reassurance likely came from competition pool manufacturer Myrtha’s tests before the event and after day 3, where the test float, sitting on the surface of the water, shows no movement. FINA and Myrtha are official partners.

FINA’s statement also notes that the researchers’ analyses are based on statistics.

“[Comments from researchers in the media] are exclusively made on the basis of mathematical analysis, without taking into account any scientific evidence in the actual pool constructed for these Games. Moreover, during the course of the successful swimming events at Rio 2016, no complaints were received by FINA about the competition conditions at the Olympic Aquatics Stadium.”

The Wall Street Journal piece, conveying the results of research led by Joel Stager, director of Indiana University’s Councilman Center for the Science of Swimming, found that swimmers in the higher-numbered lanes seemed to have a performance boost in the 50 free.

The SwimSwam piece analyzed splits in the men’s 1500 and women’s 800 freestyles, swimmers consistently would swim faster in one direction than the other. The faster length depended on the swimmers’ lanes.

To conclude its statement on the matter, FINA “expresses its entire confidence in Myrtha Pools to deliver first-class and sustainable swimming pool conditions and naturally looks forward to continuing the fruitful co-operation with its Partner in the Future.”

Of course Mythra is going to say that their pools fine; no one would buy from them if they knew otherwise.

They arent really offering any proof…no details on how this float test was performed no videos/charts… nothing… plus you cant really trust fina these days. I dunno something doesnt seem right to me

They published at least 2 videos, and if you listen to what is said in at least one of the video, they mention the test is done for a minute. Not sure what else they said, hard to hear.

Seem to recall Myrtha making similar reassurances about their pool at the 2013 world championships, ignoring swimmers complaints and the research confirmation demonstrating that a current influenced the 50m races. The 100m events are most likely affected as well given that the swimmers returning against current when lactate levels are high are battling a current while those swimmers returning with the current basically get a boost and a help bringing it home. The 2 directions don’t cancel each other out because whether you fight the current while fresh or with raging lactate levels in the bloodstream is not the same. Swimmers deserve a level playing field. Denying the effects of a current is like expecting swimmers to accept lane assignments… Read more »

What lane was Ervin in?

Would FINA, the same organization that let Efimova swim, tell us the truth? If the pool in Rio was essentially a flume, let’s have the truth so we can prevent it from happening again. This may have had an effect on placing and medals. Let’s fix it.

Math has to matter a little bit. Math doesn’t lie.

How can anyone possibly downvote this? Just facts, and science.

With all due respect, Brute, there is absolutely nothing scientific about Fish’s analysis.

Fish presented facts, not analysis, and then suggests the inference that the reason for the statistical anomaly may be a pool current. But s/he doesn’t analyze the facts. What am I missing?

Instead of making this an issue of blame, can’t we just get some good science to give our athletes the best opportunity to swim fast on a level playing field. People obviously aren’t satisfied with the float test, and there is at least some reasonable basis for concern over the results and analyses published so far. The people raising questions about this issue are the same ones that will use pools in the future and likely be involved in making decisions about building pools. Myrtha, these are your future customers. Your company is full of engineers, people with the technical expertise to address these concerns. No one is saying Myrtha intentionally screwed something up. No one is saying Myrtha knew… Read more »

How could anyone possibly downvote this?

who cares about ‘votes’?

For anyone reading this in the future – please not that this comment was not by Barry Revzin who did the initial analysis of the results. I don’t believe the commenter was trying to mislead anyone, just happens to have the same username.

That is right, I am not Barry Revzin. The box says “Name”, I put Barry. Maybe SwimSwam could add a unique username/login function?