Was There a Problem with the Rio Pool? 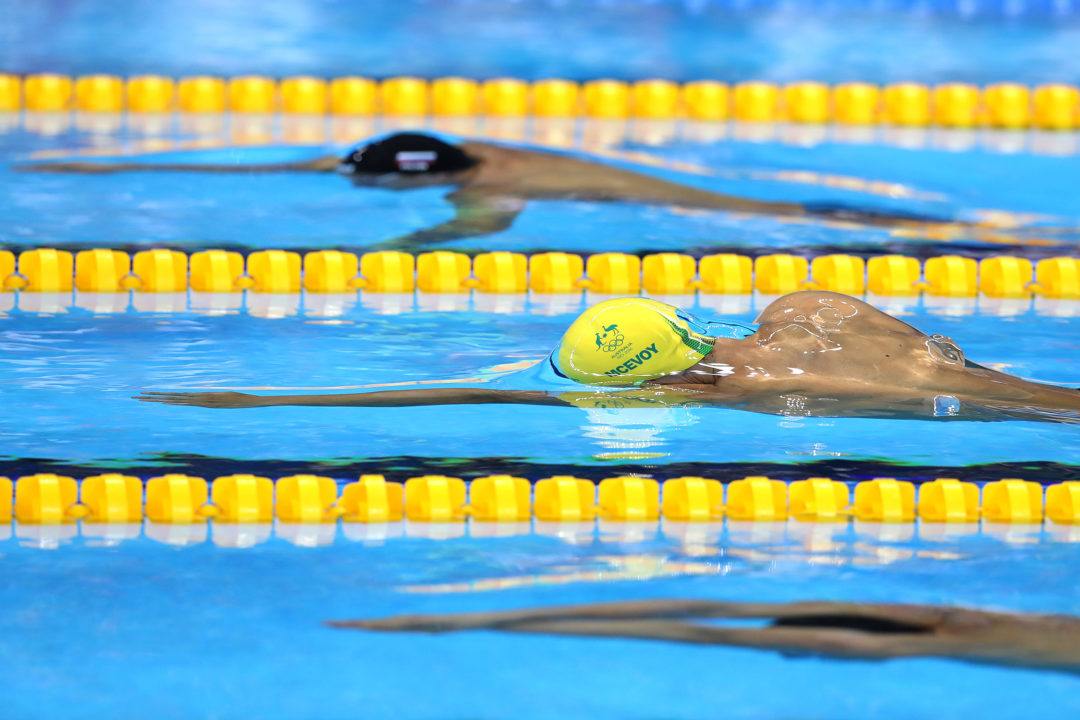 Barry Revzin shares with us how he feels there may be a problem with the Rio pool. Current photo via Simone Castrovillari

Barry Revzin has seemed to notice something very interesting about the pool in Rio. He has shared with us the information below on his thoughts including data and explanations.

I have been obsessively watching every session during the Olympics with friends (really all of us watching on our own, thousands of miles apart, but filling a WhatsApp group chat with several hundred messages a day), and during one of the sessions there was a throwaway comment by either one of the commentators or one of the swimmers about how somebody was swimming faster in one direction than another. That seemed overly suspicious to me, so I decided to check it out.

Could there be a current in the pool? (Again?)

To start with, I took a look at all the splits of the finalists in the men’s 1500m and women’s 800m freestyles and compared how they swam their races in prelims to finals to see if lane assignment had any effect. You would expect swimmers at this level to have a clear race strategy, particularly those right on the cusp of making finals. And you would expect distance swimmers to roughly even pace the middle parts of their races. But that’s not really what happened. Instead, we have a lot of jagged splits – swimmers consistently going faster in one direction than another. Furthermore, Belmonte Garcia and Leah Smith, when they switched which side of the pool they were on, actually inverted in which direction they were swimming faster:

You can see the same in the mile, with Horton, Cochrane, and especially Christiansen (who had the largest lane shift – six lanes to the right):

At this point, this is just an interesting anomaly (along with the general “jaggedness” of the splitting as a whole). There could be something there that’s pushing the swimmers towards the turn end in lanes 1-4 and towards the start end in lanes 5-8.

So let’s think bigger. I took a look at all the 400s, 800s, and 1500s swum in the last five major meets for which I could find both splits and lane assignments: Barcelona 2013, US Nationals 2014, Kazan 2015, US Olympic Trials 2016, and Rio 2016. I skipped swimmers for whom there were incomplete splits as well as one who was time trialing a shorter distance during the longer one(see note 1). I also dropped the opening and closing 100m from each race. For the rest, I took a look at the lap over lap percentage change in split time and adjusted it for direction (see note 2). I would expect these distributions to be roughly around 0 (with some noise) and completely independent of lane. Certainly you don’t split your race from lane 1 any differently from lane 8 right?

My expectations are definitely met by the results from Nationals in 2014, Kazan in 2015, and from Trials in 2016. Each lane’s distribution is right around zero, there’s not any clear differentiation from one lane to another. But Barcelona and Rio were dramatically different. In both pools, there was a clear drift from lane 1 to lane 8 – which suggests that swimmers were pushed towards the start end in the upper lanes and pushed towards the turn end in the lower lanes, with the effect greater the further you get from the center. This is very concerning.

Edit: this previously said that the effects would even out – which they would not.

Even with a circular current, there would be effects that don’t even out over the course of a long race. These add up to a few tenths of a second for the swimmers in the outer lanes of the 800 and the 1500. In a race that was decided by seconds, this would not have affected the final result ordering. But in a 50, a difference of a couple tenths of a second due to a push or a pull could be the difference between a medal and not. It’s hard to know how fast a swimmer should go in a 50, but thankfully we can compare multiple performances by the same swimmer from heats to semifinals to finals. If a swimmer moves from a purportedly unfavored lane (like 2) to a purportedly favored lane (like 7), does that lead to a faster time? We would definitely expect it not to! I looked at all the 50s (all strokes where possible) across the same five meets (no stroke 50s in the Olympics so fewer data points in the Trials and Olympics charts) and tried to tease out the impact of lane change (simply new line minus old lane) on performance improvement (new time divided by old time). For instance, Etiene Medeiros swam a 24.82 in prelims out of lane 2, then a new South American record of 24.45 in the semifinal out of lane 8, then a 24.69 in finals out of lane 1. This means that with a lane change of +6, she had a performance change of -1.49%, and with a lane change of -7 she had a performance change of +0.98%.

Here are the full results, along with lines of best fit and regression statistics:

As before, we see basically no impact in Nationals, Kazan, or Trials. Very low correlation, and the slope has very little predictive power. Perfect.
But in Barcelona and Rio? That’s a tremendous effect. 48% of the improvement in time in Rio, and 36% in Barcelona, can be explained by moving from the left hand side of the pool to the right hand side, with an extremely small pvalue. The slope is large as well, 0.2% improvement per lane as swimmers move to the higher lane numbers. That doesn’t seem like a lot, but consider that 2nd through 4th place in the womens 50 free came from the favored lanes and just 0.1 seconds separated Simone Manuel in 2nd (from lane 7) from Ranomi Kromowidjojo in 6th (from lane 3). That’s 0.4% of the race, and it looks as if Manuel got a relative 0.8% boost.

These results are very disconcerting to me, but do not in and of themselves prove that there is a problem. However, the data strongly point to serious problem in the pool which could have led to an unfair competitive environment, especially in the 50m freestyles. I think it should be investigated.

Footnotes:
1) Marcelo Acosta in Kazan split his 800m at 3:52.8 / 4:19.6. It was an extreme outlier in the dataset as far as split consistency went, so I think it’s safe to exclude.
2) For example, here are the first few splits of Henrik Christiansen’s finals performance in Rio after dropping the first 100 meters. It’s the last row that I’m interested in, which ensures that the alleged current has the same sign in both directions:

To find out more about this, go to Barry’s next other post. This was written by and courtesy of Barry Revzin.

Hi,
I am looking at doing an in-depth study and looking at the correlation between this. I was wondering if the raw data was available for use?

where did u get the data?

Did the same company construct the pools in Barcelona and Rio??

Ha.
Like Brazil would test or fix this.
And you think Fina would intervene?

It should be easy enough to tell if you’re right. If the current was strong enough to affect swimmers’ performance, then certainly at least a few of the swimmers themselves would have noticed it. And tracing currents by putting floating objects in the water (or perhaps a bit under the water) and seeing where they go is an age old practice.

In the next games and important championships 2x swim in opposite direction?