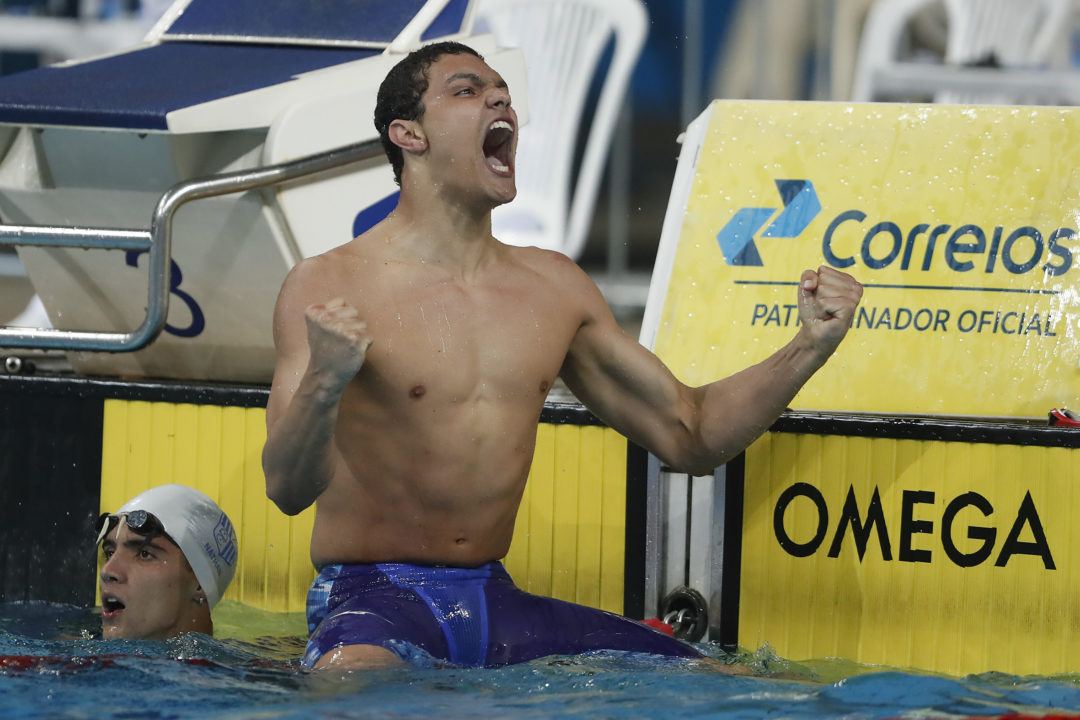 Check out the quick short course swims coming out of Brazil on day 2 of the 2021 Jose Finkel Trophy, a World SC Championships qualifier. Archive photo via Satiro Sodre/SS Press

In fact, Almeida’s outing here now frog hops her over Maria Pessanha to become Brazil’s 2nd fastest woman ever in this SCM evet. The national record stands at the swift 2:09.03 Joanna Maranhao-Melo put on the books in 2009.

Joining Almedia under the qualifying threshold were Stephanie Balduccini and Fernanda Celidonio who touched in times of 2:10.99 and 2:11.13, respectively for silver and bronze.

Additional winners included Gabriel Fantoni getting it done for gold in the men’s 200m backstroke, producing a solid effort of 1:51.73. That was well under the 1:52.66 needed for Abu Dhabi, but it also knocked well over a second off of Fantoni’s previous personal best of 1:53.25.

With Fantoni’s performance here in Bauru, the Indiana Hoosier now becomes Brazil’s 2nd fastest man ever in this event, sitting only behind record-holder Leonardo de Deus’ top mark of 1:51.51 from 5 years ago.

The women’s 800m freestyle saw Gabrielle Roncatto get to the wall first in the morning heats, claiming the top spot of the timed final in 8:29.67.

However, it was Viviane Jungblut who ultimately took the meet title, producing a time of 8:22.71 to have both women easily grab qualify for the World SC Championships.

How will the US select people for SC worlds?