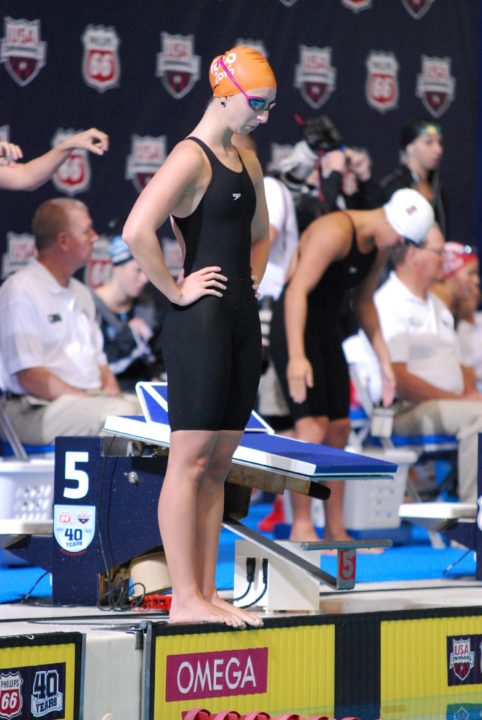 We might see this new breakout from top Tennessee backstroker Lauren Solernou at SEC's in just under two weeks. Archive photo via Janna Schulze/SwimSwam.com

Some top-secret video from a Tennessee Volunteers practice has leaked out.

Earlier in the season, SwimSwam’s Amanda Smith was watching swimming videos, and noticed the peculiar top-arm breakout that the Tennessee Volunteers have been using. Read more about those here.

At the time, we were teased a little bit by Tennessee Associate coach Tyler Fenwick with a “wait until you see our backstroke breakouts.”

Well, now we can all see them, thanks to some more sleuth work from Amanda. This video, posted on the Coach’s Eye website, shows a Tennessee swimmer demonstrating their unorthodox breakout. Many, many coaches believe that kicking on one’s side is faster, but Tennessee has taken it to the extreme with swimmers actually surfacing on their sides before their breakout stroke.

This time around, Fenwick says that “we’re just trying to ride that line and snap into the breakout,” emphasizing the smooth penetration of the water’s surface, followed by a more pronounced rotation than normal on the first stroke.

“It’s allowed our swimmers to carry speed through the breakout more effectively,” he said of early results.

We haven’t been able to obtain any race footage of the Volunteers have been using it in the meets to see if it’s given them a visible advantage over their opponents, but Fenwick says they’ve been using it all year, and it’s something we’ll be watching for in two weeks at the SEC Championships in Athens, Georgia.

I understand the concept and the physics of it, but I have to agree with SwimFan. Officials are probably going to call this a DQ more likely than not. Especially at the age-group level where officials might not be as seasoned or in the know of what the purpose of this technique is (obviously not all, but many).

The exit off the start is legal. The exit off the turn is a stroke infraction (shoulders past vertical) right around the 18 second mark (right shoulder past vertical).
There is nothing illegal per se about the technique just can’t push it past vertical.
I’m sure the TN coaches are well versed in the rules and will have their swimmers trained to execute it properly

I saw them compete at a meet and their female backstrokers looked awful and the ‘new breakout technique’ wasn’t helping. Not sure if this breakout needs a serious taper too.

Wow, looks fast, but bizarre. It seems that she is taking a freestyle stroke whilst upside down prior to the breakout?