Every Olympics Since 1952 Has Had an Individual Swimming World Record 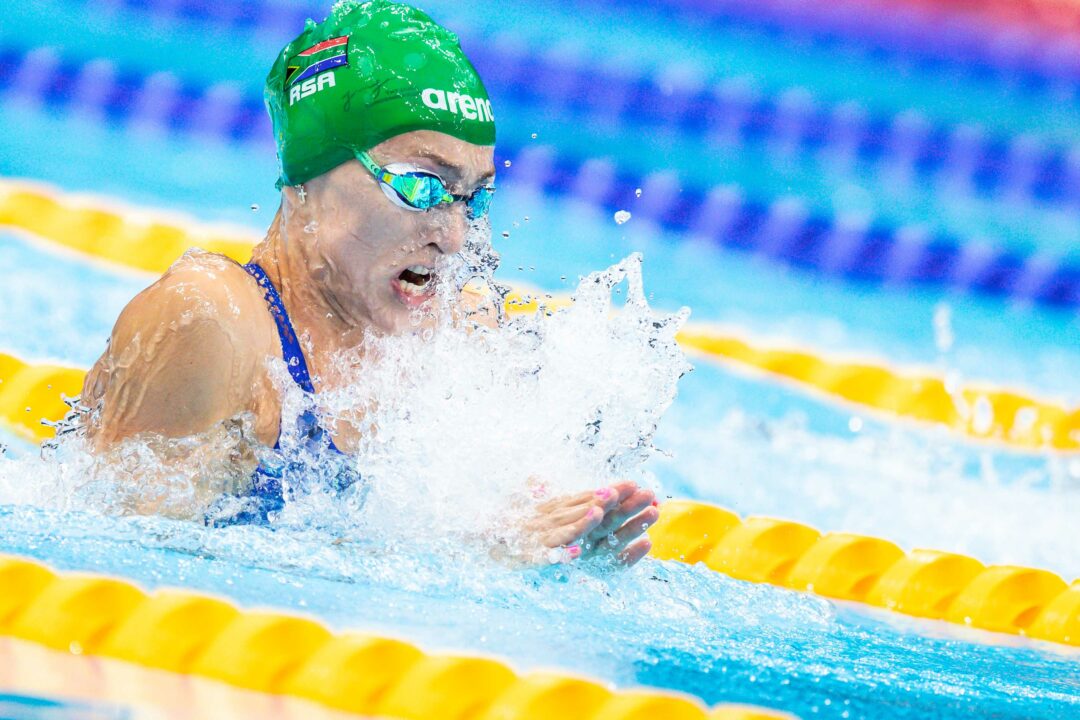 Tatjana Schoenmaker was just .05 seconds away from a World Record in the 200 breast prelims. Will she get the meet off the schneid on Friday morning? Archive photo via Jack Spitser/Spitser Photography

The two relay records saved this meet from a more dubious recognition – every Olympic swim meet since World Records in swimming were first consistently kept has had at least one World Record broken. In 1904, the races were in yards – which didn’t have World Records at the time. In 1900 and 1896, while there were probably World Records, they weren’t well-organized. FINA’s establishment in 1908 as the global governing body really brought some consistency to World Records, so that is, essentially, the start of the “World Record” era.

*In 2008, special suits made partially of polyurethane were allowed, leading to a rush of World Records. This would continue through the end of 2009, when the suits were outlawed.

While not across-the-board, there has definitely been a trend of slow times in Olympic finals this week in Tokyo.

75% of SwimSwam’s readers thought there would be 7 or fewer World Records in Tokyo, and so far they’ve been right.

There are lots of theories on why this is happening. Some theorize that the stress of the COVID-19 pandemic has hit some nations and athletes harder than others. On its own, this isn’t fully explaining, because we’ve seen lots of fast swimming around the world throughout the pandemic.

Another theory relates to the morning finals sessions not being the usual rhythm for elite racing. The IOC moved finals to the morning so that they would be in primetime for American television and NBC’s multi-billion dollar television deal. Of course, that didn’t seem to have as much impact at the 2008 Olympic Games, where the same plan was used and Michael Phelps won 8 Olympic gold medals.

And so perhaps the real recipe has to do with the combination of the two. The stress of the COVID-19 impact that has not necessarily hit all corners of the world (or even an individual county) equally, plus the morning finals. COVID caused many athletes to have to scramble to assemble racing opportunities and didn’t leave as many opportunities to practice these morning finals. Limited pool time among COVID restrictions forced many athletes to “train when they could” and limit opportunities to prepare a training schedule tailored to this competition schedule.

COVID restrictions for many countries meant a later arrival in the village. That means less time to adapt to their new rooms and environs prior to the start of competition, which maybe led to not sleeping as well and being less alert for morning finals.

At some point, we know that World Records will begin to slow down in pace as humans come closer to the physical limits. Track & Field World Records, for example, often survive for decades, which has never been common in swimming. It doesn’t seem like such a dramatic slowdown is yet in play, though, even as we still work to conquer the hurdles of the 2008 and 2009 supersuit era.

So will this streak be broken? There are still a few reasonable chances based on trend and form. Check out the most likely World Records over the last few days of competition.

“The mixed medley felt coming in like it would easily be broken, though nobody looked too threatening in prelims” *stares in GB only being 3 tenths away*

There is no way Rylov could get that one.

Different Reid but I agree

I am the first Reid

Yes but better chance in the 100 fly

Any way to do a statistical analysis of times say compared to the previous year’s WC and see if this year really is an outlier?

My theory is that morning finals aren’t really an impact. I think almost everything can be attributed back to Covid

Uncertainty as to whether the Olympics would actually take place.

And not only no fans in the stands, but their families aren’t there, either. To some that might be a bonus, but not universally.

I think the extra year is probably reason #1 for most of the older athletes that didn’t make it.

Didn’t she add time in each round of the 100? I don’t think it’s happening in finals, as much as I would love to see it. The one I was most hoping for was women’s 200 free. Titmus’s swim at Trials was sooo good.

No more Olympic finals in the morning. Ever.

It’s really not that big of an issue. 2008 Beijing like people have said. It’s more likely to do with the pandemic.

” ….*In 2008, special suits made partially of polyurethane were allowed, leading to a rush of World Records.”

Most of them are broken already!

200free gonna be there for a while

not gonna lie, 2008 was just simply the most exciting and anticipated olympics there’s been. even without the world records it would’ve been the great one. the pool was by far the prettiest and most expansive/(and expensive) looking. the crowd was massive, the coverage was amazing mostly due to everyone wanting to watch phelps. and swimming was just on a general up-and-up. 2007 was a huge year for swimming too and that was before the suits became “super”. 2008 was just plain destined to be an explosive olympics, and to be fair the Chinese put on an incredible games.

why is it never mentioned in this context that it was 2008 and they had super suits?

maybe.. beijing times woulda been way faster had it been in the evening

Beijing had the benefit of those buoyant body suits. So it’s not really comparing apples to apples.

And again, we had a pandemic here that emotionally devastated a lot of swimmers. Some people just aren’t at 100 percent.

It definitely has more to do with it being in the morning than COVID. I have been watching every swimming session, and I notice that at least half of the swimmers swim slower in the morning round than in the evening prelims. For instance in the Men’s 400 IM, 7 out of the 8 swimmers were slower in the finals then they were in prelims

Give current swimmers WR and they will break EVERY WR

Evening / Morning has nothing to do with it. If that’s the case, include the full moon vs quarter or half moon, the tides high and low. Plus the fact most athletes are in a new time zone!

Swimmers are bred swimming trials in morning finals at night.

‘Good for a morning swim’ is a long used coach euphemism for crappy swim but let’s not get you down for finals.

I have a sneaking feeling KK in the heats. Night swim, no pressure, think he could let rip.

Women can’t establish records in a mixed relay, since they could draft or at least benefit from being surrounded by overall faster swimmers
(on second thought I might have misunderstood your comment)

Wouldn’t be shocked if Ryan Murphy did, too. Agreed that the Russians are more likely – Kolesnikov had it before he torpedoed himself – but Murphy has a shot.

Dressel will break at least one individual world record.
I think the pressure is off his shoulders now after winning the 100 free which was his most challenging race.
I’d like to see him break Cielo’s 50 free world record.