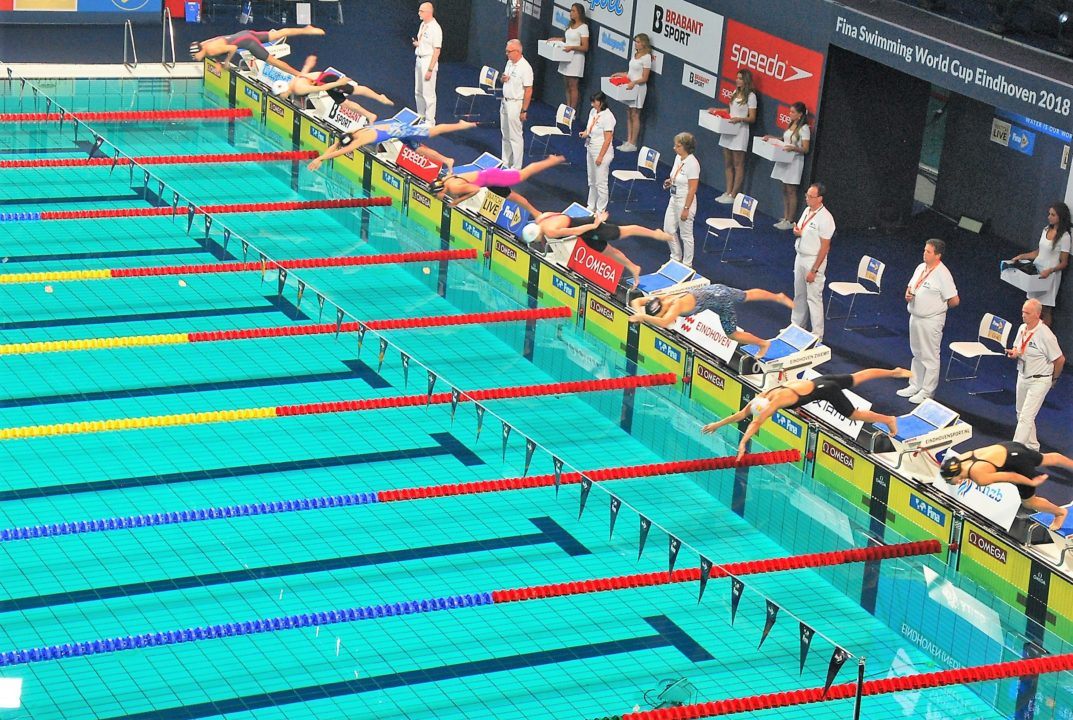 The pool in Eindhoven, Netherlands has seen a lot of great swims. One of its best swims, however, was so unbelievable that the cameras missed it altogether. Stock photo via Daniela Kapser

What if I told you that the best relay comeback in the history of major international swimming competition is one that you’ve never seen?

Heading into the final leg of the women’s 34-point medley relay at the 2010 IPC Swimming World Championships, the team from Great Britain was in a dogfight with the Russians for the title.

For anybody unfamiliar with the system in para-swimming, each athlete is given a classification ranging from S1-S10 (physical impairments) or S11-S13 (visual impairments). Generally speaking, the higher the number of the classification, the faster the times will be.

After Great Britain opened up an early lead thanks to Stephanie Millward, who was on track to become a British Olympian before she was diagnosed with multiple sclerosis at age 15. In 2010, already at 28-years old, she was in only the beginning stages of what would become a multiple-Paralympic-medal and World Record-setting career.

But the Russians slowly clawed their way back into the race, with S9 swimmer Irina Grazhdanova closing a 3-plus second gap almost entirely on the back half of the butterfly leg.

The television cameras and commentators at that point honed in on those two relays, swimming in the center lanes in what itself looked like it might become one of the epic relay finishes, with S6 Ellie Simmonds holding back Russia’s S7 anchor Oxana Guseva as the two roared past the flags.

In the background, you can hear the in-house announcer saying that the Americans weren’t in it, but based on previous panned-out shots, it was hard to imagine this as any more than wishful thinking.

After all, the Americans sat in 4th place for most of the race, and had a 13-second gap behind the British at the last exchange. As Simmonds and Guseva began their battle, the American anchor hadn’t even climbed onto the block yet.

On paper, the comeback was not much of a surprise. The Americans were one of only two relays (along with 8th place the Netherlands) that used a pair of S10 swimmers. One of those was Ashley Owens, their anchor leg, who was the world’s #2 in the 100 freestyle that year.

For Britain, Simmonds, a superstar in her country, was the world’s best S6 that year.

Their best times that year were separated by about 13-and-a-half seconds, which was almost exactly the gap between the two at the final exchange. That Guseva held on as long as she did was actually a heroic effort on her part – her relay anchor was a second-and-a-half better than her flat-start best from that year.

And so the race was always destined to come down between which of the group had the urgency to get to the touch. And in that regard, Owens, swimming in lane 7, off the screen and outside of the view of Simmonds in the middle, maybe had an advantage. She knew she just had to swim as hard and as fast as she could to the finish. While Simmonds was locked in a battle, that she won, with the Russian to her right, Owens was freed, on clean water, and with a rabbit to chase.

The announcer’s call on the video is almost unintentionally iconic, as if it’s searching for an explanation to what had happened, for some gathering as to what was missed and where the Americans had come from.

On paper, for an analyst who reviewed the numbers, the comeback made perfect sense. That doesn’t make watching it, or maybe not watching it, any less special.

For those who got to see it, like Cortney Jordan, it was unforgettable. The rest of us are just left in envy to use our imaginations about the most incredible relay finish we’ll never get to see.

This is a good example of why a wide pool view is better for finishes…use the close up in the replays. Thanks for writing about this Braden!

Kind of hard to know what’s going on in any race without Rowdy Gaines telling us, “she’s breathing to her right. She can’t see the swimmer in lane 7.”

I prefer “WELL THERE’S NO DOUBT HE’S TIGHTENING UP”

“BERNARD IS LOSING SOME GROUND!”