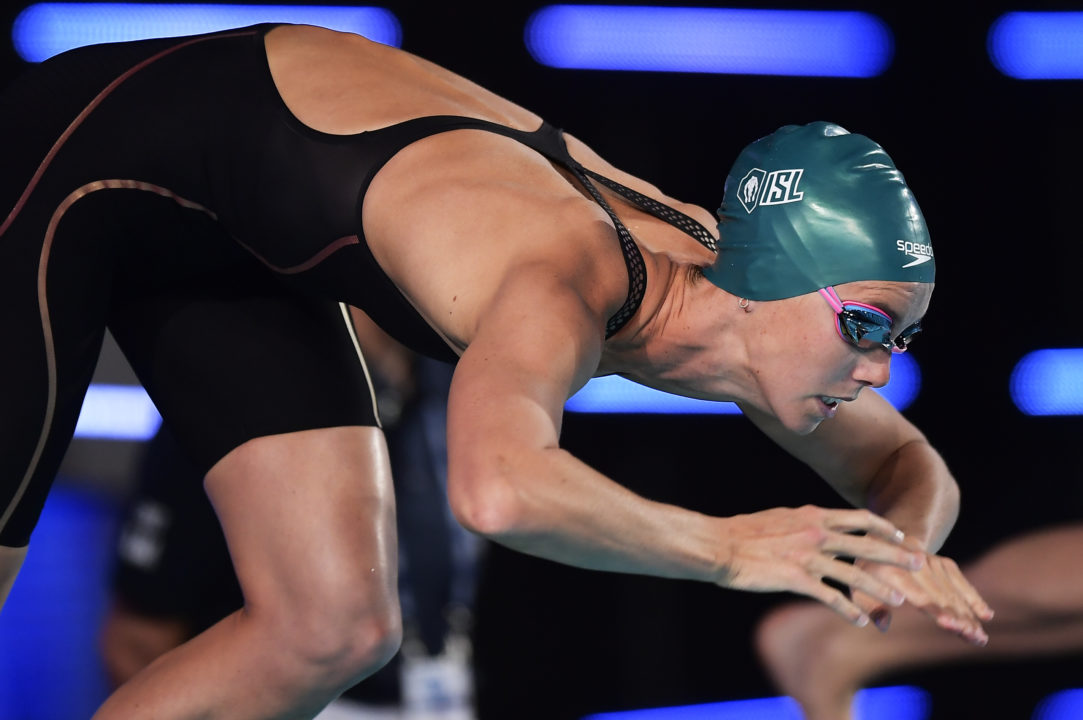 Multi-Olympic medalist Emma McKeon looked strong in the women’s 200m free event tonight, with the 26-year-old taking the victory in 1:54.88. That held off 16-year-old Mollie O’Callaghan who notched a new Aussie Age Record in a big-time PB of 1:55.24. You can read more about O’Callaghan’s record here.

As for McKeon, splits for the Griffith University ace included 55.46/59.42 to produce her solid result, one that falls within the top 10 personal performances of her career. She owns a lifetime best of 1:51.66 in this SCM 2free event from 5 years ago.

Following up on his convincing win in the men’s 400m IM on day 1,  27-year-old Mitch Larkin had more work to do at these 2020 Queensland Short Course Championships.

Larkin busted out a time of 51.13 to get his hand on the wall first in the men’s open 100m backstroke in this evening’s session, splitting 24.88/26.25. Although the St. Peters Western star was well off his lifetime best and Aussie national record of 49.03, his time was enough to clear the field here by 1 1/2 seconds.

Olympian Emily Seebohm won the women’s 100m IM here tonight in a time of 1:00.64 and also took on the women’s 100m back against domestic rival Minna Atherton. The pair were super close in last night’s 200m back, separated by just .10 and tonight was a similar story.

Atherton wound up on top again, but this time by an even smaller margin of .08. Atherton touched in 57.77 while Seebohm settled for silver in 57.85.

Beating both the aforementioned women from a time perspective was the aforementioned O’Callaghan. The teen fired off an eye-catching clocking of 57.00 to nail a new Aussie Age Record and dominate the 1back event here tonight. You can read more about O’Callaghan’s electrifying swim, along with her 200m free and 100m free outings tonight, here.

Maddy Gough busted out a new Aussie National Record in the women’s 1500m freestyle tonight, lowering her 15:38.01 from last month to a massive 15:31.19. She became the world’s 5th fastest performer all-time in the event with that performance here. You can read more about Gough’s big-time swim here.

Not to be lost was the fact that Kareena Lee also hit a new lifetime best en route to 1500m free silver in the open category, with the 26-year-old Noosa swimmer coming in at 15:40.51. That demolished her own previous PB of 15:53.03 from 2 years ago, making her Australia’s 3rd fastest performer ever and among the top 10 performers ever worldwide.

Between Gough and Lee, however, was Cotton Tree’s Lani Pallister, the women who already nailed a new 800m free Aussie national record here in Brisbane. 18-year-old Pallister blasted a time of 15:38.99 to log the fastest time of her already stacked career.

In the younger set, 15-year-old Tiana Kristzinger made some noise with a winning effort of 15:58.30. That wiped out her previous PB of 16:18.12 to get the teen under the 16:00 threshold for the first time. Kritzinger’s time tonight earned her a spot on the record books, erasing the previous Age Record for 15-year-olds of 15:58.61.

There was a battle between two rising junior stars in Thomas Hauck and Sam Short when it came to the 17-year-old men’s 200m freestyle race. Both Hauck and Short have been wreaking havoc on the Aussie age record boards as a preview of what’s in store for the 2020/21 season.

Tonight, it was All Saints’ Hauck who wound up on top, hitting a 2free time of 1:46.25. For Short of Rackley, he notched a new PB of 1:47.15 after having turned 17 just this month. He already hit a PB of 1:47.63 in this event earlier in September at the Vorgee Brisbane Short Course meet but managed to slice another .48 off here.

Both Hauck and Short dipped under the Queensland All Comers Record for 17-year-olds, a mark which World Championships finalist Clyde Lewis established as 1:47.20 in 2015.

Making waves in the men’s 100m free was 22-year-old SPW swimmer Jack Cartwright. The 22-year-old finished atop the open podium tonight in a time of 47.29, a new PB. His outing slashed .08 off of his previous fastest outing of 47.37, a time he produced at this same meet last year.

Thanks, will make updates.

Hi There,
Are you doing a Day 3 Recap – I might have overlooked it here.