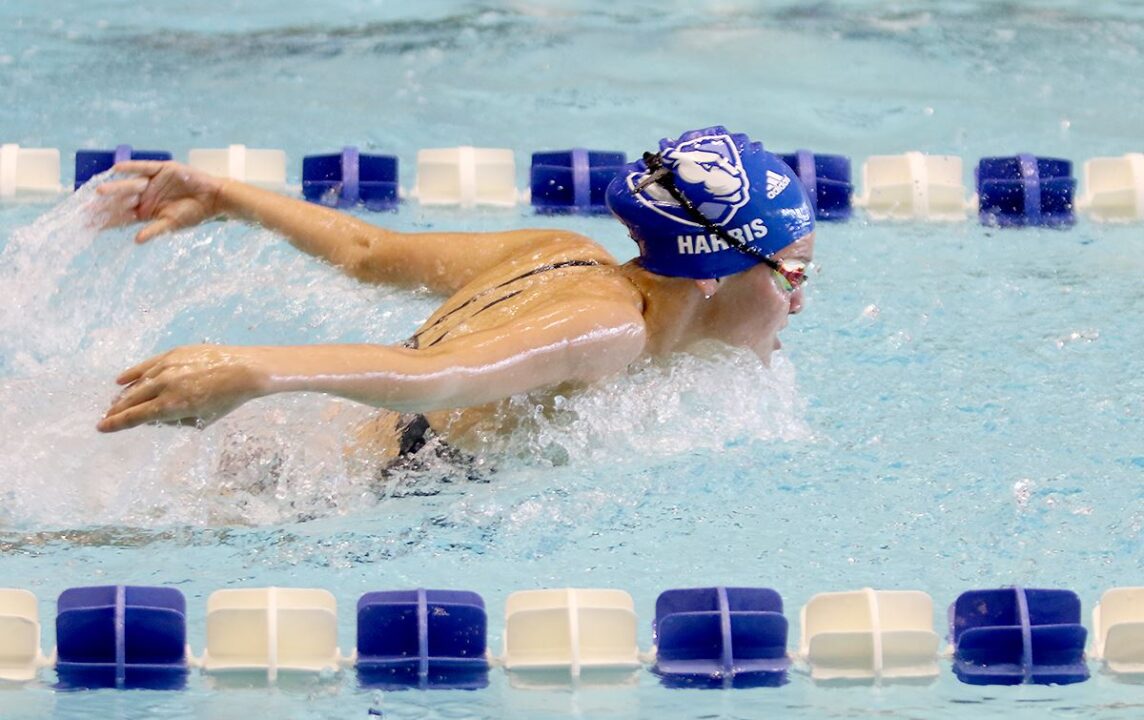 Eastern Illinois Men’s and Women’s swimming earned their first victories of the season after traveling to Valparaiso on Saturday to face the Crusaders. This was the first career win for head coach Tyler Donges. The men’s team won by a score of 155-107, and the women’s won by a score of 167-95. The men’s team had eight first place finishers on the day, and the women’s had 11 first place finishers.

The women’s team started the day right with a win in the women’s 200 yard medley relay. The team of Olivia Viele, Ashley Glesing, Kaylan Ottosen, and Camryn Lewis took first place with a time of 1:50.54. Kennedy Darensbough followed suit winning the women’s 1000 yard freestyle with a time of 11:08.35.

First time winner Emma Ballantyne also won today as she placed first in the 500 yard freestyle with a time of 5:24.28. Two events later, Ottosen won her third event against Valparaiso as she won the 100 yard butterfly with a time of 59.62. She was the only swimmer to be under a minute in that event.

Baumgartner picked up his second win of the day in the 100 yard backstroke. He posted a time of 54.92 which earned EIU nine points. Dismas Dillion joined in on the action after he took first in the 50 yard freestyle winning with a time of 21.30.

Senior Jarod Farrow won the 500 yard freestyle with a time of 4:59.48 beating the next swimmer by three seconds. The men’s afternoon came to a close with a win after the 200 yard freestlye team of Buse, Jacob Nichols, Colston, and Baumgartner posted a time of 1:26.06.

Both teams will be back at Padovan Pool next Friday, Oct. 29 at 4 p.m. when Ball State travels to Charleston. Ball State placed third out of 10 teams at the Indiana Intercollegiates earlier this month with that being their only action of the season so far.

The Valpo men’s and women’s swimming teams competed in the first of three scheduled home meets on Saturday at the Valparaiso Aquatic Center at Valpo H.S., combining for nine first-place event finishes in a dual meet with Eastern Illinois.

The Valpo women return to action with a dual meet at UNI next Friday, Oct. 29 at 4 p.m. The men compete next in a tri-meet at the Valparaiso Aquatic Center next Saturday, Oct. 30 versus Green Bay and Youngstown State at 2 p.m.