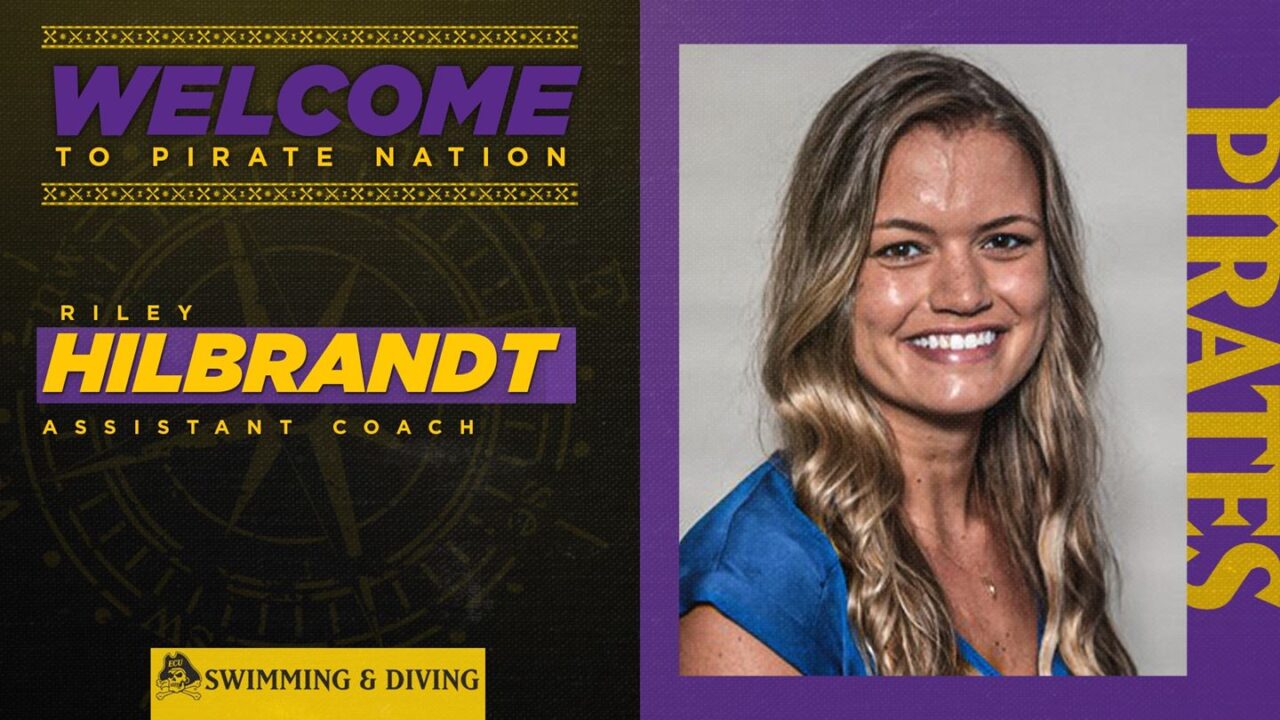 East Carolina University announced today that Riley Hillbrandt would be joining the staff as assistant coach as the Pirates prepare to compete again. Current photo via ECU Athletics

East Carolina University announced today that Riley Hillbrandt will be joining the Pirates’ staff as the assistant women’s swimming coach.

This will be the first full-time Division I job for Hillbrandt, who previously coached at Clarion University (Division II) and the College of Wooster (Division III). That makes her part of a relatively small group of coaches who have coached at all three NCAA divisions, especially in that short of a timeframe. Hillbrandt also previously served as as volunteer assistant at her alma mater, University of Nevada – Reno, where she competed from 2013-2017.

While part of the Wolf Pack, Hillbrandt, helped the team to a Mountain West Conference championship in 2016, and she also earned two All-Mountain West honors in her career.

It’s been a tumultuous year for the Pirates’ program. It just under a year ago that ECU announced that it would be cutting both the men’s and women’s programs immediately. After a potential Title IX lawsuit, ECU announced in January that the women’s team would be reinstated, and the school ended up retaining head coach Matthew Jabs to lead the now single-gender program.

With the Pirates no longer fielding a men’s team, Jabs, Hillbrandt, and new diving coach Ryan McIntire will round out the full-time ECU swim and dive staff, as the other four coaches employed by the Pirates during the 2019-2020 season all found other jobs.

A former Division I athlete with experience in college coaching, she previously coached at Clarion University and The College of Wooster.

“I am very pleased to add Riley to our staff, and confident we got the right person for the job,” Jabs said. “I believe her experience as an athlete, and coach will be of great value to our team. What really stood out during the interview process was her outgoing personality and a commitment to forming connections with the student-athletes, not just as swimmers but as people. That will be very important for our program in recruiting and development of the team.”

Hilbrandt joins Ryan McIntire, who was recently named the Pirates’ diving coach, as the newest members of the coaching staff since the program was reinstated earlier this year.

“I am very excited about adding Riley and Ryan to our staff and can’t wait to work alongside each of them as we return our program to the level it belongs,” Jabs said.

Hilbrandt spent the past two seasons (2019-21) as assistant coach for the men’s and women’s teams at Clarion University. She coached multiple Pennsylvania State Athletic Conference (PSAC) champions and medalists, as well as help develop all student-athletes. She also assisted with technique development, wrote dryland and swimming workouts, recruiting, social media promotion as well as serving as an academic advisor.

Hilbrandt previously spent the 2018-19 season as an assistant coach at Wooster College. The men’s and women’s teams at Wooster each finished in the top half of the North Coast Athletic Conference (NCAC).  She aided in the development of Cameron Gelwicks, who competed at the NCAA Division III Championships in the 50, 100 and 200 Freestyle. Hilbrandt’s other duties included preparing dryland workouts, perfecting athletes’ technical skills and recruiting.

Before going to Wooster, Hilbrandt spent a year as a volunteer assistant coach at her alma mater, University of Nevada, Reno. While working with the Wolf Pack, she conducted video review with athletes and helped them improve their technical stroke skills.  She was also in charge of travel arrangements for the team’s competition schedule.

While in college, she did an internship with the athletic training department, conducting research on best practices for stretching, flexibility and mobility, as well as nutrition and pre-race preparation.

Hilbrandt graduated from University of Nevada, Reno in 2017 with a degree in public health.

Fantastic hire. Riley has done an amazing job and everywhere she has been. Excited for this new chapter of pirates swimming!

Why the down votes? I dont know much about her. What i do know is Jabs has a tendency to make awful decisions