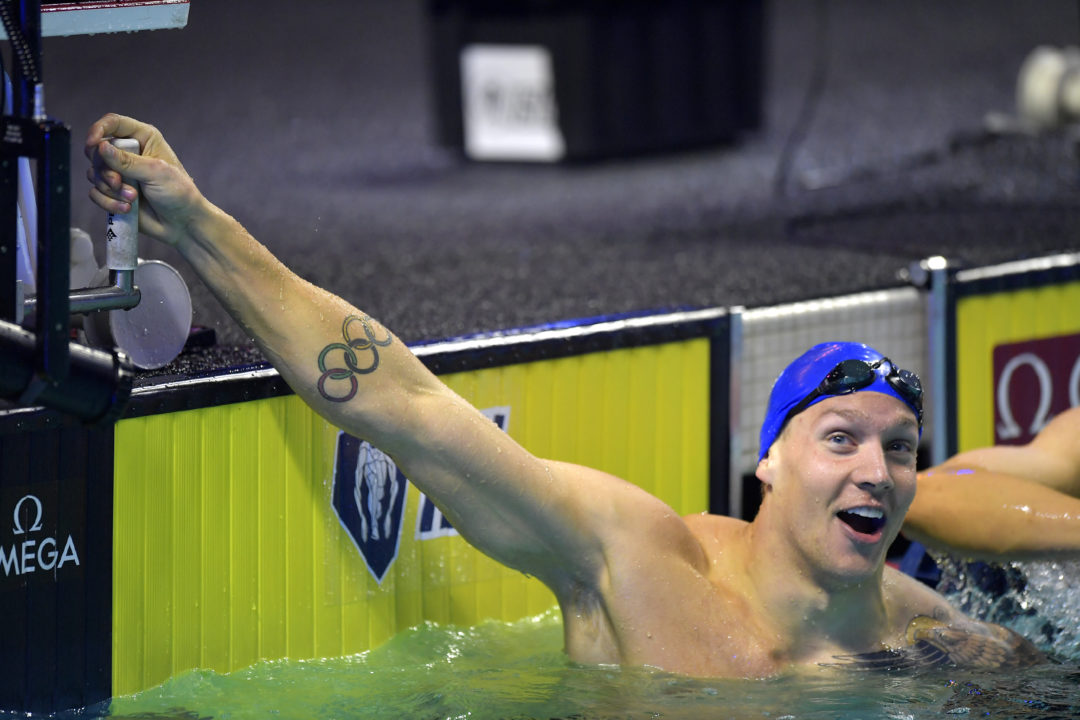 Caeleb Dressel won $19,700 at the ISL's American Derby in Washington, the highest single-meet total this year. He overtakes Sarah Sjostrom for the ISL lead. Archive photo via LaPresse - Fabio Ferrari

Caeleb Dressel won $19,700 at the ISL’s American Derby in Washington, the highest single-meet total this year. He overtakes Sarah Sjostrom for the series lead.

Dressel’s team, the Cali Condors, have swum one more meet than Sjostrom’s Energy Standard have, but Dressel did not attend the season opener, meaning he and Sjostrom have each swum two ISL meets. Dressel has the two highest single-meet money totals of the series so far ($18,500 in Naples and $19,700 in Washington) and leads all earners with $38,200. That includes $10,000 between two MVP bonuses.

Dressel’s MVP bonus actually helped the Cali Condors out-earn the LA Current as a team, though the Current won the meet. However, the final season tallies are going to depend heavily on the results of the league championship, where swimmers will earn bonuses for each meet they attended, plus bonuses based on their team’s finish in the ISL final:

Are there any members of ISL who still got nothing?
I know that $150 is nothing else but nothing but I asked about exact $0.

Yes. 32 of them in fact (not counting people that are technically on rosters but haven’t actually swum an event). At least 2 from each team.

This is so cool and wonderful that swimmers are finally able to race and earn some $~ To me the best swimmers are better athletes than almost anyone in the world and deserve to be paid but it is also nice they do not get so much $ it ruins the sport or themselves!

Your name reminded me something:
L’Internationale
Debout, les damnés de la terre
Debout, les forçats de la faim
La raison tonne en son cratère
C’est l’éruption de la fin
Du passé faisons table rase
Foule esclave, debout, debout
Le monde va changer de base
Nous ne sommes rien, soyons tout
Congratulations to Dressel. Big names in swimming do not need ISL actually. I mean it is nice to have this money, but they are not that much noticeable portion of their income. They can have big bucks with endorsements and other big pay meets. But what about those who don’t have such a luxury? Is ISL a solution to them? Does it really make swimming a profession?

Not when there are 6 or 7 meets… but apparently there will be 20+ next year and who knows where this is going in terms of financial partnerships. This is the first season of a professional sports league. How do you think it started in other sports? With everyone instantly $10 million richer? That’s not how it works. It’ll grow into its own. But it takes vision and loyal athletes and perseverance. And tuning out the naysayers, of course 😉

From your lips to God’s ears