DeVine Admits To Drinking at USA Meet, But Stands By Homophobia Accusations 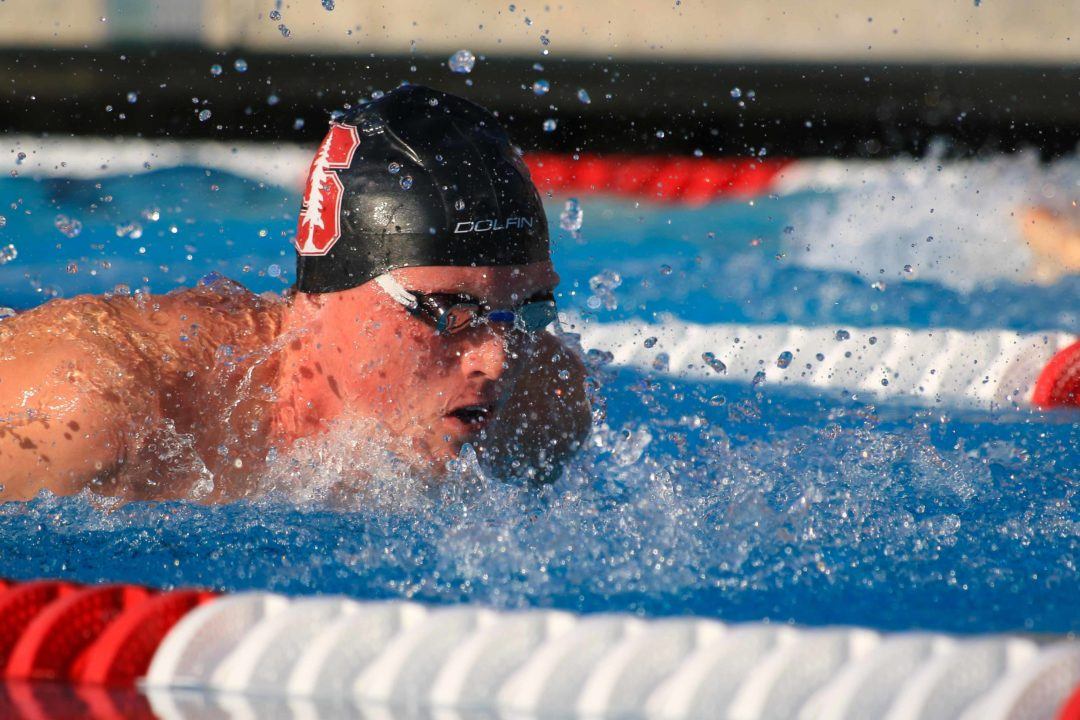 Abrahm DeVine told Stanford's student newspaper that he drank at a Team USA meet, but stands by his claims that he was alienated by a homophobic culture. Archive photo via Jack Spitser/Spitser Photography

U.S. National Teamer Abrahm DeVine admitted to Stanford’s student newspaper that he “drank at a Team USA swim meet instead of showing up to support his teammates,” but still stands by his accusations that the real reason he was denied a place in Stanford’s pro training group was his sexuality.

DeVine went public last week on Instagram, accusing the Stanford swimming & diving program of homophobia and saying he was “kicked off the Stanford swim team.” DeVine had already exhausted his NCAA eligibility, but coaches of the Stanford men’s and women’s programs said DeVine was “not invited” to remain on the team as a postgraduate.

At the time, DeVine’s Instagram post said that “there are surface level reasons I was kicked off the Stanford swim team, but I can tell you with certainty that it comes down to the fact that I am gay.” We asked both DeVine and the program about those ‘surface level’ reasons and did not receive any specific details. But DeVine told The Stanford Daily in a statement that he had violated the National Team’s Honor Code by drinking at a Team USA meet, rather than showing up to support his teammates.

DeVine has since tried to clarify his Instagram post, saying it was less about calling out specific coaches and more trying to draw attention to what he calls a “systemic issue” in which he felt alienated as a gay swimmer within the culture of the team and the sport at large. Per The Stanford Daily report:

“I think that I wrote this entire Instagram post where every sentence is very important, but the only one that people are really focusing on is me calling out Stanford, and that makes my message sound very aggressive and that I’m out for blood, when in reality that is not what I wanted at all,” DeVine said. “I’m here to just say this is a systemic issue.

“Between coaches and other athletes, I feel there is so much ignorance to what it means to be gay in a sports world that my character is not recognized,” he said in his statement. “Although I feel I can participate by being silent and non-disruptive, I feel that my identity as a gay man is incompatible with the swimming world.”

DeVine went on to say that homophobic slurs were common on the Stanford team before he publicly came out:

“What I really wanted was some thought and reflection on where [the homophobia] was coming from, on why you think gay equals bad,” he said in the Stanford student newspaper piece. “And I think what actually happened was like, ‘Oh shoot. We can’t really say these [slurs] anymore. We might still think it’s kind of funny, but we’re going to censor ourselves.’”

DeVine also references coaches “appealing to masculine stereotypes to motivate swimmers and teammates mocking topics such as fragility and privilege.” He also challenged his coaches’ ability to coach gay athletes:

“If you ask any of these coaches, ‘What do you think about gay swimmers?’ they would say, ‘That’s great. I support equality, I support gay swimmers, sexuality doesn’t matter to me at all,’” DeVine said to the Stanford paper. “And then you can ask, well, ‘Why have you never coached a successful gay athlete and what do you think are the obstacles facing them?’ They will have no response.”

We asked the school for comment last week when DeVine made his Instagram post. At the time, they only provided this joint statement from the women’s head coach Greg Meehan and men’s head coach Dan Schemmel:

“It is truly unfortunate Abe feels this way. That said, Abe wasn’t invited back to train with us this fall, as a postgraduate, for reasons entirely unrelated to his sexuality. We take pride in the inclusivity and supportiveness that exists on both our men’s and women’s teams, but we will continue to strive, as always, to improve those aspects of our culture.”

It shouldn’t be this deep.

Despite what LBGTQRS? think, no one cares!!!! No one wants to know either. We also don’t need a flag, a color, a parade, a week or anything else pointing at them and saying I am THE snowflake!!!

how is not caring close minded? it’s literally just saying that we DO NOT care what your sexuality is, just be whatever you want and leave us alone.

If you don’t care, why did you post and end it with an ad hominem? I don’t want to know is not the same thing as I don’t care. Self-reflection doesn’t seem to be one of your strong points.

Thanks for making Abe’s point clearer

Left handed swimmer: you seem really triggered by the fact that LGBTQ people exist. Guess what? America is not your safe space from people that are different from you. Get over it.

It’s people with hostile beliefs like yours that create the need for that list of those things that offend you. Living in silence and hiding who you are is not equality. Who is really the snowflake here?

Not caring is part of the problem…. by not recognizing it you are becoming the problem that Mr Devine speaks about. Just like with racism, and the inclusion of black athletes, you cant just all of a sudden say, oh okay we accept you because we dont care… think about all the years of damage done before that screwed the whole system up to begin with… I mean cmon now..

Homophobia at its best.

nice to see someone starting some much needed conversations….. there just does not seem to be that many commenters here….. maybe if he was Texas diver, man fire man…. Bro-culture is cancer of the world and should be no tolerated anywhere

Consequences of violating the USA Swimming code of conduct include a year long suspension from competing for Team USA if I am not mistaken. Instead he was not invited to return to the Stanford swim team. For him to consider this a “surface level reason” for being removed seems absolutely ridiculous.

Will USA swimming be investigating this (an offense that should seen him suspended through 2020 trials) and what must have been a cover-up by the coaches at worlds? Not even taking into account the reckless slandering of a brand new coach and entire program….

The fact that this comment got 60 likes – that even 2 people on earth think Devine should be banned from the Olympics because he drank at the end of Worlds – pretty much makes his point. They’re really saying he should be punished for speaking up and not being a good quiet boy.

Missed the point. Nobody is actually saying he should miss the Olympics. It’s being pointed out that his punishment is actually more mild than it should have been according to the handbook, and that if he wants to make the case that his lesser punishment is “too much”, then he should remember what the actual punishment is supposed to be.

He is also slandering a university that is nationally known for its inclusiveness. While he may have encountered some issues with individuals on the team, my doubts lie with the “systemic” aspect of his claims against Stanford.

read the comment directly below yours (as just one example)

Will USA swimming be investigating this (an offense that should seen him suspended through 2020 trials) and what must have been a cover-up by the coaches at worlds? Not even taking into account the reckless slandering of a brand new coach and entire program….

it really might if it goes a bit deeper ….

It was a national team meet, most swimmers weren’t from Stanford.

AD removed himself from the Stanford team . Cheer up it’s good news ….he graduated ! There is no mens pro team so its called moving on .