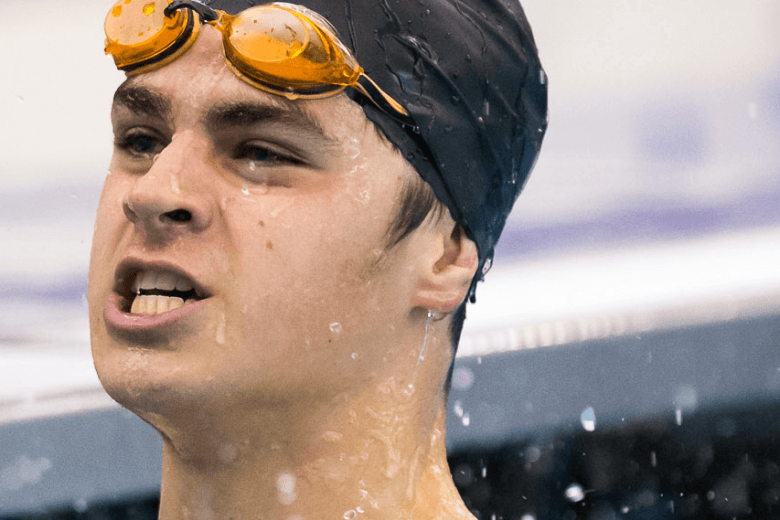 Michael Andrew broke another National Age Group record to celebrate his 15th birthday. Meanwhile Vinny Marciano broke a NAG of his own and Joy Jiang won her 6th, 7th and 8th races in the 10-year-old age group. Archive photo via Tim Binning/TheSwimPictures.com

Joy Jiang came in with the top seed in all three of the girls events for 10 & unders, and she defended her top slot in all three. First, she won the 100 back, going 1:01.85 – that’s a 1.5 second improvement from prelims and sits within a second of Regan Smith‘s NAG record.

Jiang also won the 50 breast for Westchester. Her 34.02 took the event by seven tenths, with Payton Baxter touching out Amelia Macholz for second.

Finally, Jiang took the 100 free in 57.66, running away from the field easily. Those three wins bring her to 8 total, and she’ll chase double-digits on the closing night of action tomorrow.

On the boys side, Lance Godard, Joshua Zuchowski and Johnny Bradshaw combined to sweep all the wins. Godard took two wins in the 10-year-old division. The Kansas City Blazer went 1:01.95 to win the 100 back, just under two seconds off the Destin Lasco NAG in the event. He returned to take the 100 free in 55.69. Those were his second and third wins of the week, adding to four second-place finishes.

In the next age group up, Vinny Marciano continued to be the story for Morris County. The 12-year-old broke his third NAG record of the week in the 100 back, taking down the mark set by Destin Lasco, another talented youth swimmer active in this age group right now.

In addition to that time (51.40, almost a full second faster than the old mark), Marciano put up a quick 100 free, going 48.34 for the win. That is now just .4 off of the NAG record set by Michael Andrew in the race. Marciano already broke an Andrew NAG earlier in this meet with his 50 freestlyle.

Between those two races was the 100 fly, where Marciano took his third title, equaling his total from a night ago. His time of 53.33 in that race is just a second and a half off the NAG record held by Chas Morton from all the way back in 1984.

In the 12-year-old heats, Cuyahoga Falls’ Giovanna Cappabianca took a pair of titles. She won a nail-biter against Westchester’s Katherine Douglass to open things up in the 100 IM. Cappabianca put up a 58.48 to overcome the top-seeded Douglass’s 58.71. Both girls were within two seconds of the NAG record.

Another great race was in the 100 free. Christina Ciancolo of Clearwater and Nation’s Capital’s Katie Mack each dropped big chunks of time off their prelims swims and battled it out for the win. Ciancolo touched first in 51.66, just getting in ahead of Mack’s 51.82.

After picking up three wins last night, Chase Travis of the Delaware Swim Team took the 11-year-old heat of the 100 free tonight. Her 54.75 took the gold by just over a second.

Michael Andrew had an unusually sparse schedule tonight, scratching out of the 200 breast on his 15th birthday to focus on the 100 fly. Though he turned 15 today, per USA Swimming rules he can still break 13-14 NAGs for the duration of this meet because he was 14 at the start of the meet.

Andrew took advantage of that opportunity with his one swim, going 46.95 to officially take and leave the 13-14 NAG under 47 seconds in the event. His previous record was 47.23 from earlier this year.

The Virginia Gators’ Keith Myburgh won a pair of events in an unusual combination. The 14-year-old went 2:07.75 to win the 200 breaststroke by 8 full seconds, then came back to pace the 1650 free at 15:52.31, showing great endurance in a pair of very dissimilar strokes.

For the girls, 14-year-old Kristen Romano won three races with flying colors. The Town Wrecker swimmer went 55.22 to win the 100 back, the first event for this age group on the night. She had to give everything she had for her second win, as Samantha Suer of Cenango pushed her right up to the finish. In that 100 fly, Romano went 55.73 to touch out Suer’s 55.88 by a finger.

The 100 free was relatively close as well, with Romano going 51.29 to beat Delaware Swim Team’s Serena Derderian by a half-second.

Hometown swimmer Marcella Ruppert-Gomez won the girls 1650. She went 16:46.05 to dominate the race, the only swimmer under 17 minutes. The 13-year-olds’ heat went to Brooke Travis of the Delaware Swim Team.

Girls 50 breast champ Olivia Paoletti won the 200 distance of that stroke, going 2:18.31. That was in the 14-year-olds’ heat; in the younger final, top seed Julia Kral ran away with things at 2:21.91 for the Academy Bullets of Illinois.

13-year-old Desmon Sachtjen made it a sweep of the backstroke races, taking the 100 back in 53.36. The Sauk Prarie swimmer had already won the 50 and 200 distances earlier in the week.

In the 14-year-old heat of that race, Clearwater’s Vance Sanders put up another great swim, winning in 50.51. That was a couple tenths faster than he went at prelims and won by almost one full second.

Then, in the 100 free, Dymek took second in the night’s closest touchout to Poseidon’s Lindsey Fanz. Fanz put up a 52.44 to win the event, beating Dymek’s 52.45 by a single hundredth to deny her a second win.

In the boys 100 free, William Myhre won the younger heat. He was also the 50 free and 50 breast champ earlier in the meet, and went 48.66 to take the title for St. Charles of Illinois.

The 14-year-old heat went to Daniel Krueger of McFarland in 44.83 with Minnetonka’s John Shelstad second. That time for Krueger is within a second of Michael Andrew‘s NAG record in the event in what’s been a great weekend for the McFarland sprinter.

Haha! Chas Morton’s antique 11/12 100 fly NAG record of 51.85 is still safe.
It looks really unbeatable.
Perhaps 11-year-old Winn Aung and Isaac Grinberg will have a chance to break it in the next SCY season. They are already in 55.36 and 55.51. Possible but very very very hard.

Beyond the duet Andrew/Marciano which breaks NAG records after NAG records, I will mention other great performances. Impressive 10-year-old Joy Jiang. She really dominates her age category at this meet. Same remarks for 11-year-old Christopher Hardt and Chase Travis in their age category. I forgot to mention earlier in the week that 12-year-old Madelyn Donohue was now the 3rd performer of all-time in the 1000 free in the 11/12 age category thanks to her 10.06.90. 14-year-old Daniel Krueger’s 100 free deserves to be mentioned. He’s only the 3rd 13/14 boy ever to break the 45 barrier after Ryan Hoffer and Michael Andrew. Great week of sprint for the 12-year-old girls as well. Big battles between Katie Mack and Christina Cianciolo… Read more »