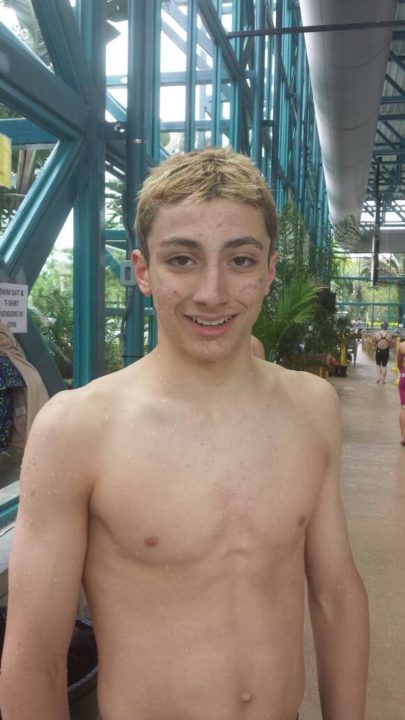 The 12-year-old continued his great weekend at the NASA Showcase Classic with his fourth National Age Group record, this time taking down the 100 free mark in a time trial. Current photo via Chris Brookover (@pcbrooky)

Make it four for Morris County’s Vinny Marciano: the 12-year-old continued his great weekend at the NASA Showcase Classic with his fourth National Age Group record, this time taking down the 100 free mark in a time trial.

Marciano was just .4 off the record in last night’s individual 100 free race, and he time trialed the event Saturday afternoon hoping to make up the final half-second. It turned out to be worth the extra effort, as Marciano went 47.89 to just sneak under the old Michael Andrew record of 47.95.

That’s the second of Andrew’s sprint free marks Marciano has bettered this weekend; he also broke the 50 free earlier in the meet. His other two records were in the 50 and 100 backstrokes.

This swimmer, also is the training method “USRPT”?

All these records make my head spin. 🙄
I don’t know if somebody has counted the number of NAG records in that SCY season but It must be again very impressive.

Isn’t that usually you Bobo? 😀 Hopefully someone counts because it must be huge!

It will be without me this time. 🙂
But I’m sure swimswam will make a little count for us. 😛

Vinny has now more 11-12 NAG records than anyone, 4, having just surpassed Michael Andrew, who now only has 3.