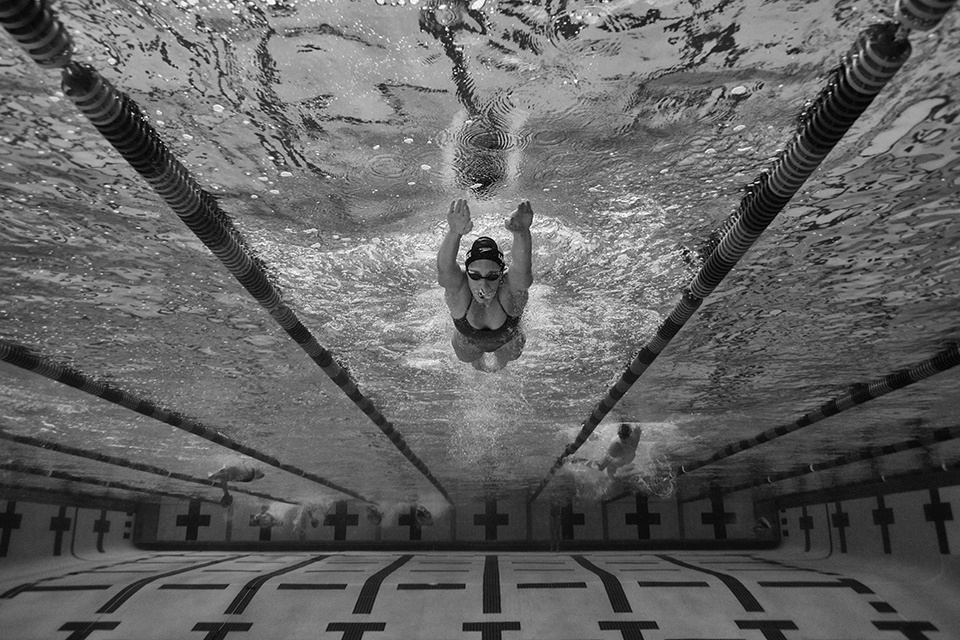 Michael Andrew, Ella Eastin, and others weighed in on the new Northside Swim Center in San Antonio, Texas, home to Junior Nationals last week, and to US Nationals beginning on Thursday.

Lakeside’s Brooke Forde and Gator Swim Club’s Isabel Ivey fought Savanna Faulconer of the Y-Spartaquatics for the lead out of the gate in the fly leg. In backstroke, Forde started to creep ahead, joined by Ivey. Forde dominated her breaststroke walls in the second half of the race, gaining more of a lead ahead of the field off each one. Nashville’s 14-year-old Ella Nelson came up on the trio in the breaststroke, but lost a fight with Ivey for the third place spot. Ford stretched out her lead through the free, touching first, while Faulconer held a solid second.

Nathan Murray of SwimMAC used his strong backstroke and freestyle legs to grab the win in the consolation final. He swam a 3:53.28, annihilating the competition with a 56.00 in the backstroke leg.

The entire field of the championship final held even through the 100 fly, just barely led by Gulliver’s Miguel Cancel and Dayton’s Tommy Cope. Cape Cod’s Jarrett Jones swam a huge first 50 of the back, but Mason Manta Ray Cooper Hodge negative split the back and surged ahead of him. NOVA’s Charlie Swanson took over the lead in the breaststroke, gaining a bodylength going into the free. His 100 breast split was a breathtaking 1:02.62. At that point, Swanson had a definitive lead, and the fight for second shaped up between Jones and Hodge.

Alyssa Marsh of SwimMAC was out in the lead at the 100. Cardinal Grace Oglesby used her last two beautiful underwater breakouts to propel herself ahead, winning the event. Marsh would have finished second, but she disqualified for a one-handed touch.

Camden Murphy of Kingfish Aquatics went out fast, hitting the 50 wall first and then extending his lead almost a body length ahead of the competition at the finish. He was the only swimmer to break 47, hitting way under in 46.25. Second went to Upper Dublin’s Michael Jensen in 47.28. Third was the Bolles School’s Ariel Spektor in 47.62.

UPDATE: Andrew took the record back in 46.23 at West Champs.

SwimMAC’s Jessica Merritt definitively won the consolation final, dropping almost a second and a half from her swim this morning to post a 1:46.72.

SwimMAC’s Erika Brown took the early lead, flipping first at the 50 ahead of the Upper Valley Aquatic Club’s Hannah Cox. Cox and Tatum Wade of Nashville pulled even with Brown through the 150. In the last 50, Tatum Wade had a burst of speed, but Hannah Cox closed even faster to win the event. Cox took the gold in 1:44.67, followed by Wade in 1:44.78, and Brown in 1:45.32.

Upper Dublin’s Michael Jensen went out in 21.74, gaining a bodylength on the field by the 100. He took the win in the end, well ahead of the field in 1:34.93 and winning a gold on his 18th birthday. His Upper Dublin teammate Jake Sannem held onto Jensen’s wake throughout the swim, finishing second in 1:36.46. Third went to Carmel’s Drew Kibler in 1:37.47.

Allie Raab dropped half a second to win the championship final of the 100 breaststroke, finishing in 1:00.02. Second went to Lakeside’s Kennedy Lohman in 1:00.14. Third place took a 1:00.87 from High Bridge Aquatics’s Madison Winstead.

Azura’s Marco Guarente took it out fast, scoring the lead at the 50. Avon’s Chandler Bray and SwimMAC’s Will Chan came up to challenge him at the 75, shooting forward in the last few meters.

Chan ended up with the gold, breaking 54 with 53.99. Second place was decided by the narrowest of margins. Bray beat out Grosse Point’s Jacob Montague by one one-hundredth, finishing in 54.12 to Montague’s 54.13.

Marcie Maguire from Ridgefield won the consolation final in 54.41.

Walsh’s swim was a new national age group record for the 13-14 age group, beating out Kathleen Baker’s 52.87 from 2012. Walsh’s time was over a second faster than the previous record.

X-Cel Swimming’s Alexander Martin won the B final in 48.72.

Carpet Capital’s Ethan Young went out in 22.51, well ahead of the competition. He stayed in front of the competition throughout, posting a 46.46 for the gold. Metro Atlanta’s Dean Farris swam a 47.36 for silver, while third went to Michael Taylor of Dynamo, who finished in 48.02.

They are twins & could end up being super stars. Both of them just missed trials this past summer.

15 year old Bolles swimmer Will Davis posts a 19.50 anchor! Impressive! His twin brother (I presume) also with a strong 20.48. Definitely swimmers to watch. The next male American Campbells? 😉

Exactly, who are you? Bobo Gigi, you always seem to have something to say about every swim ever.

The ghost of Duke Kahanamoku?… Maybe…

Why I’m not surprised?

Someone has the time of Reece Whitley in the 100 breast at NCAP Invitational? Just to see if MA has lost another of his NAG records. 🙂
Thanks.
The live webcast on SW has crashed….