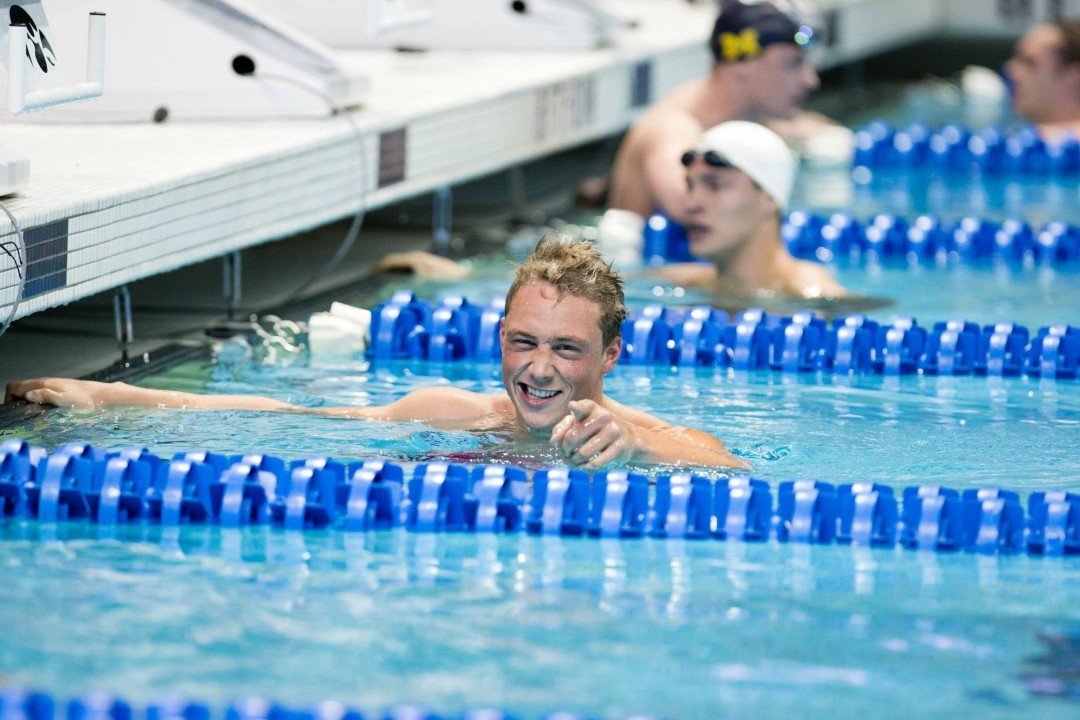 NCAA Champion David Nolan has announced he will be moving to Tempe, Arizona to train under Bob Bowman leading up to the 2016 Olympic Trials. Archive photo via Tim Binning/TheSwimPictures.com

In a video interview back in February, Nolan described his post-collegiate plans as being “up in the air.”  He envisioned training with the ‘Stanford guys’ post-NCAAs and seeing how the summer went, having the goals of making the national team and going to the U.S. Olympic Trials on his agenda.

Nolan is coming off of a tremendous senior year for the Cardinal, capped off with a stellar performance at the 2015 Men’s NCAA Championships.  22-year old Nolan finished 2nd in the men’s 100 backstroke and 3rd in the 200 backstroke, but simply lit the pool on fire in his title-winning 200 IM.  With his mark of 1:39.38, Nolan posted the fastest time in history and lowered his own cluster of American, U.S. Open, NCAA and Stanford records in the event.

Even with his success in the 200 IM event in yards, Nolan has yet to crack the two-minute mark in the long course version of the event.  His best time is the 2:00.35 he logged at the 2013 U.S. Summer Nationals.  Nolan was entered in the event at this year’s Summer Nationals that just wrapped up in San Antonio, but wound up scratching the event.  The Pennsylvania native did finish 3rd in the 100 butterfly (52.15) and 6th in the 100 freestyle (49.54).

At the 2012 U.S. Olympic Trials, Nolan racked up top 20 finishes in the 100 backstroke and 200 freestyle and placed 40th in the 200 IM.  His best shot at making the Olympic team may indeed be in the 4×100 freestyle relay event, where the top 6 finishers are selected to race in Rio.

But then again, with his move to Tempe, Nolan will training alongside the one and only Phelps, the first male swimmer to ever defend a third straight Olympic title in the same individual event – the 200 IM.

If the next Olympics were 3 years away, David Nolan would retire. He was focused academically in college. He swam little or none over the summers. A good engineering career is more important to him than swimming.

BUT – he also knows he is insanely talented, and only will be for a limited window. He doesn’t want to look back in 10 years and wonder “what if?”. So if you’re going to do one last hurrah, go all-in for a year. Even if you don’t make it to Rio, training with Phelps/Bowman will be a memorable experience… something you can tell your grandkids about.

It might be a smart move long term (50/50 really). Phelps, even though in supreme form at the moment and the top man come Rio, is still 30. He probably has not got long left and if he pulls off a 4-6 gold haul could walk away. Bowman could be looking for a potential replacement and I can’t think of many with more naturally gifted than Nolan.

So much conjecture makes it interesting. If he trained diligently since NCAA’s and only got the results that he had then maybe he needs a change of venue. Now the question is what did he do in April and May to prepare for the summer? A world class swimmer needs to be in all the time. It is the swimmer that makes it happen with the aid of the coach. My coach said he would be nothing if the swimmer didn’t put in the time and do what was “asked”. Still have never seen a Real Diary. From a swimmer.
I would hope that he has had a chat with his coaches in Hershey as I am sure they… Read more »

I don’t want to hear about X,Y,Z swimmer that didn’t swim well under Bob….everyone in the know understands that each of these athletes came to Bob under certain circumstances, oftentimes after some pretty successful performances at major International meets. For every Yannick Agnel, who had zero room to play with after winning the Olympic Gold and the WC Gold — and ended up with “only a bronze” in… Read more »

I’m surprised he didn’t go to Florida. 4 of the 8 finalists in the 200 IM at Worlds were forged in Gainesville, and 37.5 percent of the top two men’s 800 free relays swam for Florida. No one does that event combo better than UF. I’m pretty sure no other place has gotten more guys to 1:58 or better in the 200 IM and 1:47 or better in the 200 free. His events are their bread and butter. It’ll be interesting to see how he develops in Tempe.

If his “body would just stop working at a point” during his freshman year at Stanford from the training, I don’t see how he would find working with Troy appealing. Troy might be the right guy for him, as you point out, but to Nolan, it may seem like freshman year all over again.

First of all, it is a myth that Coach Bowman “overtrains” his swimmers. The workouts are always less than two hours but very little wasted time.

I like Nolan and hope he does well also. I wonder if he considered training under Greg Meehan at stanford. Meehan is a great coach and hes done a great job with maya dirado in the IM. Maybe he just wanted a change of scenery.

0
0
Reply
A Friend
Reply to  calswimfan

The verdict is still out on Bowman for me. UofM seemed to really take off after he left and Bottom arrived (Clary’s big year was 2009) but Bob also recruited those guys and seemed preoccupied with Phelps’ Beijng run so I cut him a break.

I agree Stanford doesn’t see much LC success, but they are a college program and train their swimmers to peak for NCAAs in yards. Guess we’ll never know for Nolan.

All the questions will be answered about Bowman in the next 5 years at ASU. Will the program start placing top 25 at NCAAs…? Definitely an easy place to recruit to, who doesn’t want to spend winters in Arizona!

This is nothing. Just wait for a Teri McKeever swimmer to be mentioned.

Which is doubly ironic: it was Bowman himself, in his lecture on Capacity vs Utilization in the Fall of 2012, who made a point to extend thanks on his unparalleled Olympic success to McKeever, specifically pointing to dominance of the women’s team, and Coach McKeever’s incredible, effective array of coaching “tools” she has crafted for her program–an example of balance in capacity and utilization training.

Laughable how the unique, exceptional successes of these two coaches becomes the point of reference for their supposed ‘weaknesses’ or ‘failures’ cited by some people on these threads. It’s a credit to their success, I suppose, that they are scrutinized so closely. Unfortunate that they must suffer a different set of adjudicative criteria–and draw… Read more »

I don’t know that the Stanford coaches “suck”, but it took them 4 years to get him to go significantly faster in the 200 IM. I think the coaches he had his freshman year are not the same as the ones he had his senior year. But I still think this is a good move for him, if Bowman can figure out how to rest him properly.

I don’t think people are saying bowman sucks but maybe he is not the right fit in this case and they are just speculating it’s a healthy discussion to have. as for Stanford well its always the coaches fault when a swimmer doesn’t improve. Right?