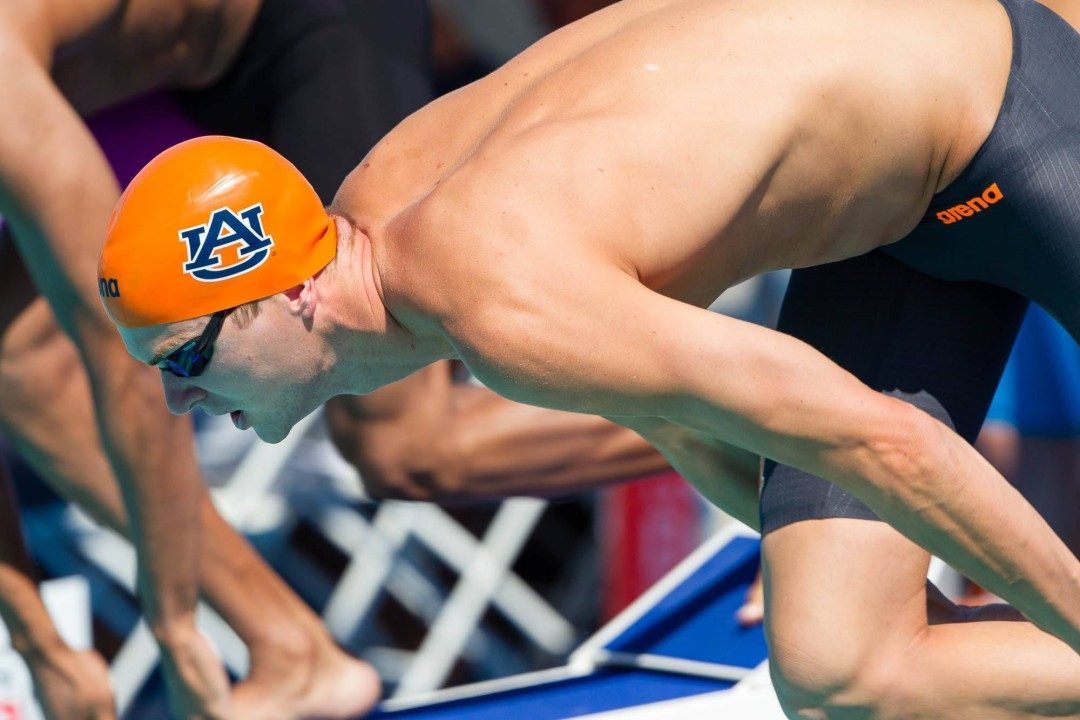 Full results (Medley relay splits are incorrect, but the overall times are accurate)

In a clash of sprint powerhouses, the Auburn men triumphed despite losing both 200-yard relays.

One of the night’s biggest wins came in the 100 free, where Auburn’s Kyle Darmody topped the reigning NCAA champ Kristian Gkolomeev for a huge momentum swing. Darmody went 44.56, with Gkolomeev putting up a 44.81. Sophomores Jacob Molacek and Peter Holoda very nearly beat Gkolomeev, too, going 44.83 and 44.84, respectively.

The rest of the meet was peppered with great races. Auburn’s Michael Duderstadt and Alabama’s Anton McKee traded blows in the breaststrokes, with Duderstadt winning the 100 (53.51) and McKee the 200 (1:57.52).

Things started out very even for the women, with Auburn and Alabama trading blows back and forth through the first five events.

Alabama got in a hole early points-wise after that big Auburn run, but a late highlight came from sophomore Mia Nonnenberg. An NCAA qualifier as a freshman, Nonnenberg started off her sophomore year in a big way with a 4:11.87 win in the 400 IM – that time now leads the NCAA by almost 7 seconds.

Does anyone know if Auburn was rested or not?

Appears as though Molacek has skinny ankles

Did Auburn or Alabama suit up for this meet?

What happened with the sprinter from Israel that was suposed to be a freshman this year for Auburn?

If we are commenting on that then we should also look at Luke Kaliszak goon past 15 meters basically every time he hits the water.

Never seen him do that. You do know it’s the head and not the hands that has to come up before 15 meters, right?

I’ve never seen Kaliszak’s head surface past 15m. But if you insist that’s your perogative.
That’s not a blatant and intentional breach of the rules as Michael Duderstadt’s pullouts are.