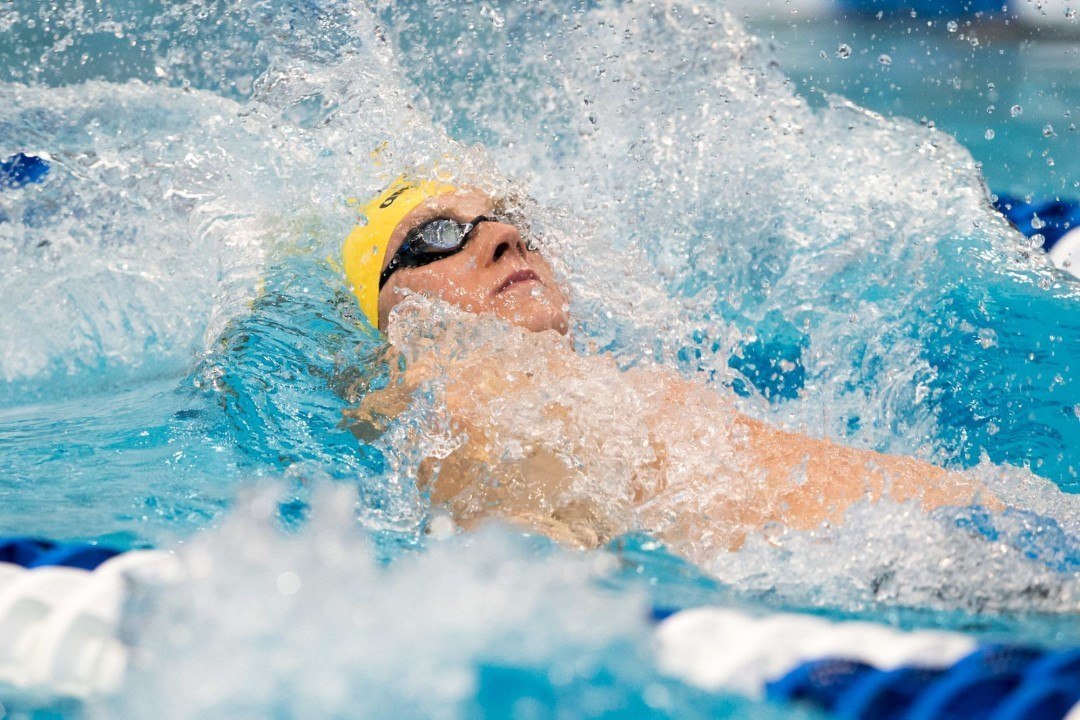 The defending 2015 CSCAA Division I Men's Swimmer of the Year began his 2014-2015 NCAA season with a perfect 4-for-4 day. Archive photo via Tim Binning/TheSwimPictures.com

The Cal men’s swimming & diving team kicked off their 2015-2016 season in a different manner than they’re accustomed to on Friday. Rather than their typical King of the Pool Pentathlon meet against Cal Poly, Dave Durden’s squad started the year with a dual against nearby University of the Pacific.

The Golden Bears, who placed 2nd at last year’s NCAA Championship meet, rolled to a comfortable 142-106 victory: a margin mitigated by Cal declaring exhibition swims for each of their last 5 events.

A new-look 400 medley relay started the day for Cal in 3:15.00. The team is replacing 50% of that relay, after graduating their breaststroker and freestyler last season, and for now the all-juniors group has inserted Hunter Cobleigh and Jonathan Fiepke into those spots (though Josh Prenot was the fastest breaststroker, swimming on the B relay).

Despite the new faces, Cal will continue to be a contender in this relay so long as they have Ryan Murphy, the country’s fastest 100 yard backstroker, leading off. He started his season with a 46.21 which stands as the NCAA leader early on.

A strong first day for the defending NCAA Swimmer of the Year ended as the second leg of Cal’s 200 free relay with a 19.54 split – part of an overall 1:20.78 for Cal. Much like we saw from his predecessor Tom Shields, Murphy as a junior will become much more important for a Cal group that isn’t as deep in the sprint freestyles as it has been, and he will have to carry a load across 7 events if the Golden Bears are going to have a shot in March.

Equally as exciting as Murphy’s hot start was the performance of Cal’s freshmen, who made up the #2 class in the country.

That includes a first career win for the #1-ranked recruit in the class of 2015 Andrew Seliskar. Seliskar is good enough to be an NCAA Champion in almost every event save for maybe the mile (and we wouldn’t put that past him either), but in his debut he was focused on the butterfly races. He split 48.5 on Cal’s medley relay, which he followed with his first victory, a dominant 1:46.77 in the 200 fly.

The #18 recruit in the class, Nick Norman, also got his first career victory in his first individual swim, winning a great battle in the 1000 free over sophomore Ryan Kao and junior Janardan Burns. Norman pushed the pace for most of the race, and a late charge by Kao  came up just short. Norman got the victory in 9:13.72, followed by Kao in 9:13.88 and Burns in 9:13.98.

Cal was without their other top-20 recruit, #3 Michael Thomas, but he is expected to be available for the Golden Bears this year.

Pacific also got a strong showing from their freshman class, most notably Makoa Haneberg from Hawaii. He swam a 50.46 in the 100 back, and while that put him just 4th overall in the race, Cal only had one swimmer go under 51 seconds last year prior to the MPSF Conference Championship meet in February.

That one swimmer is current junior Curtis Klein, who didn’t swim the 100 back at this meet, but did place 3rd in the 200 in 1:49.85. If we ignore exhibitions, that’s the highest finish that the Tigers earned on the day.

Aside from Murphy, Cal’s biggest chance at the U.S. Olympic Team (and therefore most likely to take an Olympic redshirt) is senior Josh Prenot, but Prenot’s presence at this meet locks him in for the NCAA season. He had an up-and-down meet, starting impressively with a 52.71 in the 400 medley relay on a rolling start, swimming breaststroke. Without Chuck Katis, he’s the go-to breaststroker for Cal this year.

His individual wasn’t quite as good in 54.29 (though still enough for a win), but he came back a few events later to top the 200 breaststroke in 1:55.87. After disappointingly windup in the B-Final at last year’s NCAA Championship, this was a monster time for Prenot to start the year: we can’t find a record that anyone has ever swum a 200 yard breaststroke under 1:56 in the month of October at least since the NCAA began diligently recording results during the 2007-2008 season through a partnership with USA Swimming.

Actually Texas freshman Ryan Harty was 46.5 at the Orange and White, but I’m not sure if it counts.

He did go those times, but Texas never submits their intrasquad as official results. Good note though.

“The #18 recruit in the class, Nick Norman, also got his first career victory in his first individual swim, winning a great battle in the 1000 free over sophomore Ryan Kao and junior Janardan Burns. Norman pushed the pace for most of the race, and a late charge by Kao came up just short. Norman got the victory in 9:13.72, followed by Kao in 9:13.88 and Burns in 9:13.98.”
These guys basically came from the same area in high school within 30 miles of each other if you include Kao.

To add to that, John Shebat–another Freshman at Texas…was 46 in the 100 back, DQed for kicking past 15 meters