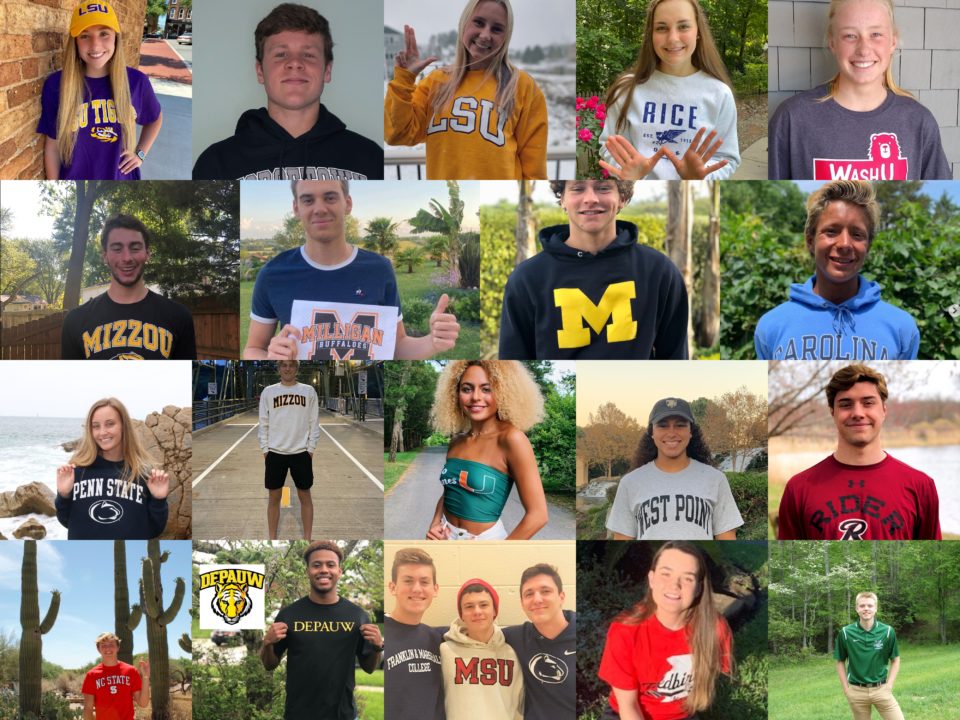 The industry group that represents collegiate swim coaches says they have around 87% support for their request to the NCAA to extend recruiting restrictions.

The College Swimming and Diving Coaches Association (CSCAA) has requested that the NCAA extend its recruiting restrictions for college programs well beyond the current moratorium, which expires at the end of August.

In a letter released on Tuesday, the CSCAA asked the NCAA to extend the recruiting dead period until December and to extend a moratorium to on-campus visits through March of 2021.

An NCAA “dead period” restricts coaches from meeting with student-athletes in person on campus or off. The NCAA first put a dead period in place relating to the global coronavirus pandemic in mid-March, and recently extended it until at least the end of August. In making that decision, M. Grace Calhoun, the chair of the Division I Council Coordination Committee (CCC), said that the decision was made to allow “coaches to focus on the student-athletes who may be returning to campus.”

CSCAA Executive Director Greg Earhart laid out 3 specific concerns for requesting the extension related to the coronavirus outbreak. Last year, when the NCAA was changing recruiting restrictions, the CSCAA has also asked the NCAA to limit early recruiting in swimming, though not for coronavirus reasons.

USA Swimming’s next scheduled national championship events, which will be the US Open from December 2-5 and Winter Juniors from December 9-12, would fall after the CSCAA’s requested end period. Those meets provide crucial facetime between college coaches, club coaches, and prospective student-athletes in a normal year; given the current restrictions, these meets could become even more crucial.

April marks the end of the NCAA season, and not allowing recruits on campus until after the season would help mitigate risks of impacting the competitive year.

The CSCAA says that in developing the proposal, they considered the relative risk of a coach travelling to a meet and being able to self-quarantine from their college team once they get back, as compared to a prospective student-athlete coming to campus and potentially exposing an entire college team to the virus.

“We appreciate the NCAA’s Council Coordination Committee’s quick response and flexibility to a rapidly-changing environment,” said the CSCAA’s new president Joe Dykstra, the head coach at Utah. “At the same time, both coaches and PSA’s find themselves living month-to-month and this would provide everyone an opportunity to enter the recruiting process in an educated way.”

According to the CSCAA, the movement for this request came from coaching groups in 3 Power 5 conferences (which according to one coach included the Pac-12 and Big Ten).

Earhart says that he and director of member and legislative services Sam Barany reached out to take a pulse of both their swimming membership, and of other supports.

“Support was strong to begin, and unanimous among our Board and Executive Board,” Earhart says. Earhart says that as they’ve gone through this process, several coaches have called to change their stance.

At last check, Earhart says that around 87-88% of coaches polled were in favor of this move.

SwimSwam reached out to a number of Division I head coaches and recruiting coordinators and received mixed responses.

Some were against the idea of extending a ban on campus visits prematurely, saying that they would instead support a modification of official visits to reduce the risk of spreading infections. Others supported the CSCAA’s ban, citing similar safety concerns.

One interesting thread of responses to our straw poll came from at least 3 NCAA Division I coaches who told SwimSwam that they were generally in favor of rolling back the recruiting cycle to later in athletes’ high school careers, so that they were in favor of the CSCAA’s proposal for those reasons that extend beyond the connection to coronavirus. That is in line with the CSCAA’s previous requests to limit early recruiting.

NCAA Division I schools have begun welcoming student-athletes back on campus, though many schools have paused that after outbreaks either on campus or in the local area. The University of Arizona announced this week that they were delaying their student-athletes’ return to campus because of an outbreak of cases in Pima County, though only 1 Arizona student-athlete had tested positive.

Everyone needs to realize that they are not the center of the universe. Parents, take your own time and money to go visit the campus and get a tour through the University itself, not just what the athletic department wants to show you. Talk more to the coaches at the club level and at the college level. Culture?? Your children aren’t going to get a real cultural experience in an official visit, heck that culture will change again before they even get there. Look at Indiana and ASU who have kids committing all over the place due to the “culture” and then transfer within two years.

Hardship is the great equalizer. We are all experiencing this pandemic as a… Read more »

This is definitely a tough year for class of 2021! My son has been swimming since the age of 9 and dreams of swimming in college. Spring visits were cancelled, SAT cancelled 3 times and so much uncertainty ahead. At this point, we would take on the financial burden to visit campus and stay in a hotel. I think these kids should be able to meet with the coaches and team in person. I can’t imagine making this decision without a visit (my son is also looking at out of state schools 6+ hours away). Would extending the dead period prevent him from meeting the coach if we were to visit campus???? There are safe ways to get around this… Read more »

Agree with most of the comments. July ACT’s were just pushed back to September. Going to have to apply now to make sure we’re on the list for Merit Scholarships. We were planning on Spring visits as well (6-10 hours away for schools) and those were canceled. Will probably visit the campus on our own through Admissions and continue the calls with the coaches. I’m hearing more and more colleges that are canceling Fall/Winter sports entirely. If you’re looking at one of those schools, I can’t imagine what kind of visit you could do.

The July ACT has not cancelled. Many sites have cancelled but many sites are still open depending on the state.

Which states are actually still having the test? We are in a Quad State area where the #’s are higher than they’ve ever been and everything is getting canceled and locked down again.

What schools are canceling fall/winter sports? I’ve heard seen one.

Bowdoin and Williams in D3 have announced it, so has Morehouse College. The entire CCAA conference suspended sports for the fall semester as well: https://swimswam.com/ccaa-suspends-all-intercollegiate-athletics-competition-for-fall-2020/

The extension of the dead period means no in-person contact between coaches and prospects, on or off campus. So, even if you went to campus, the coach is not permitted to meet with you.

Most international students commit to a school without ever visit it

I suspect that football and the Power 5 conferences plus Norte Dame will decide this or it maybe time the major conferences break away and form their own organization across the board.

Freaking dumb. No and no. Wake up people

I think people are forgetting about the average rising senior swimmer. There are many kids, even at the Futures or Winter Jr National levels, that haven’t done any visits yet. A lot of swimmers planned on Jr Days in April, spring break visits, summer visits leading into their senior year, or traditional fall recruiting trip weekends with schools not ranked in the NCAA Div I Top 30.

Our swimming community has a lot of swimmers who didn’t get a taper meet in the Spring, and they’re not really getting a LCM season either. They may not be on the 18 & Under Top 100 World Rankings list, but they have also dedicated most of their childhood to the sport.… Read more »

Good point. Many swimmers missed their spring tapper meet, will not have a long course season and may not even have a fall season. There will essentially be a lost year of late bloomers in 2021. The 2022’s will need to be recruited off times from when they were 14 or 15 years old if they follow the normal time line. It may be as much about getting a look at recent times before offering official visits as it is about everything else. There is no perfect solution but in my option it’s to early to be making decisions out as far as April.

You are so right. My son is a 2021 who had 2 visits scheduled for the spring and lost both. Had a zoom with one of the schools and they said had you been on your visit many if you would have been committed by now. Now all thec 2022s are getting all kinds of calls. Very stressful for my swimmer

I don’t think anybody is dismissing the anxiety these rising seniors are feeling. I just think you may be forgetting there aren’t that many ways to go about this right now. It’s not only a hard decision for swimmers, it’s difficult for coaches too. You’re putting money towards someone you possibly never had on campus and someone you haven’t seen race fully rested in possibly a year. Not even thinking about personality fit or lack there of. There’s risks on both sides.

While this decision may not be great, there aren’t many other ways to go about this fairly. An extended dead period covers everyone and doesn’t allow for unfair advantages. I’d love to hear if anyone has a… Read more »

We are doing on campus visits. (NJCAA) Only recruit plus 2, fill out a health checklist, trainer or nurse check temperature, all visitors must wear a mask. All college staff wear a mask as well while interacting with them. Will be more challenging when students are back on campus, but it’s hard to get kids to commit if they’ve never seen the campus.

I am confident the 2021 students who have committed did their research and did as many visits as it took to find their school. 2021 started recruiting a year ago, coaches had visits at the clubs plus they got to know the swimmers at meets. I don’t beleive that them being patient is a factor.

Depends on when your high school season is… Ohio is late Oct through last week of Feb. Some states are in the spring, like CA. That can dictate when a kid takes visits or doesn’t. We were planning in the spring.