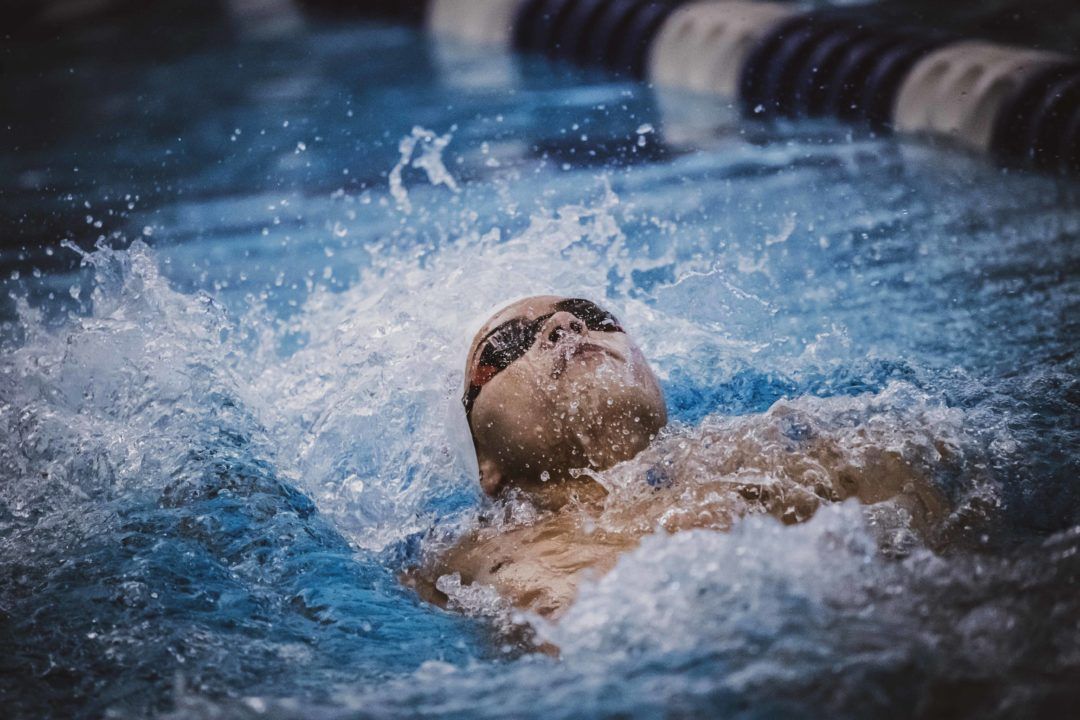 The boys meet was a high-stakes duel between Truckee sophomore Kaikea Crews and Boulder City senior AJ Pouch. Each set two individual state records in a series of back-and-forth blows, but it was Crews' Truckee team that came through with an 8-point victory. Archive photo via Mike Lewis/Ola Vista Photography

Truckee High made it a tight battle, using the state’s best sprinter to win three of their events. Sophomore Emma Purdy won the 50 free in 24.92 and the 100 free with a 54.44. Purdy would also lead off the winning 200 free relay. She joined Brooke Saathoff, Courtney Engberg and Caitlin Smith to break the state 3A record in 1:41.47. That relay are all underclassmen who should return next season after taking three tenths off the state mark this year.

Truckee also had the only diver in the girls meet: Kira Thomas, who scored 325.25 points to win the state title.

The boys meet was a high-stakes duel between Truckee sophomore Kaikea Crews and Boulder City senior AJ Pouch. Each set two individual state records in a series of back-and-forth blows, but it was Crews’ Truckee team that came through with an 8-point victory.

Truckee struck first, getting a 200 medley relay win from Crews, Aaron Bronstone, Evan Opsal and Dylan Cole in 1:39.15. They topped Boulder City (without Pouch on the relay) by five seconds.

But Boulder City took the next two races in a row, getting a 1:47.18 200 free win from sophomore Joseph Purdy and a state 3A record 1:50.42 win in the 200 IM from Pouch. Pouch dominated that race, winning by more than nine seconds.

Later on in the meet, Crews took his first event win, leading a 1-2 of the 100 freestyle. Crews was 44.99 to smash the old 3A state record of 46.4. He won that event by more than six seconds, with teammate Cole second.

Then it was a back-and-forth volley to end the meet. Crews smashed another 3A state record with a 48.69 win in the 100 back, before Pouch answered with a 55.63 win in the 100 breast, taking three tenths off the record. In the final event, Boulder City topped Truckee 3:19.30 to 3:20.38 with Pouch and Crews both anchoring, but it wasn’t enough to overcome Truckee’s points lead.

Couldn’t even be mad at the end. Our team fought hard and everyone on Truckee was extremely nice, congrats Crews you deserved it bro!

AJ YOU A GOAT

It was a pleasure meeting you AJ. Best of luck at V-Tech. Sergio is a great coach and better person. He knows a thing or two about Breaststroke as well.

This HS duel with Boulder is so fun. It makes for one of our favor meets of the year, and that is largely do to the close competition Truckee has with Boulder City. Already looking forward to next season.

Thanks SwimSwam for a great article on this fun small school league we have here in Nevada and Sierra Nevada Mountain small towns of California.