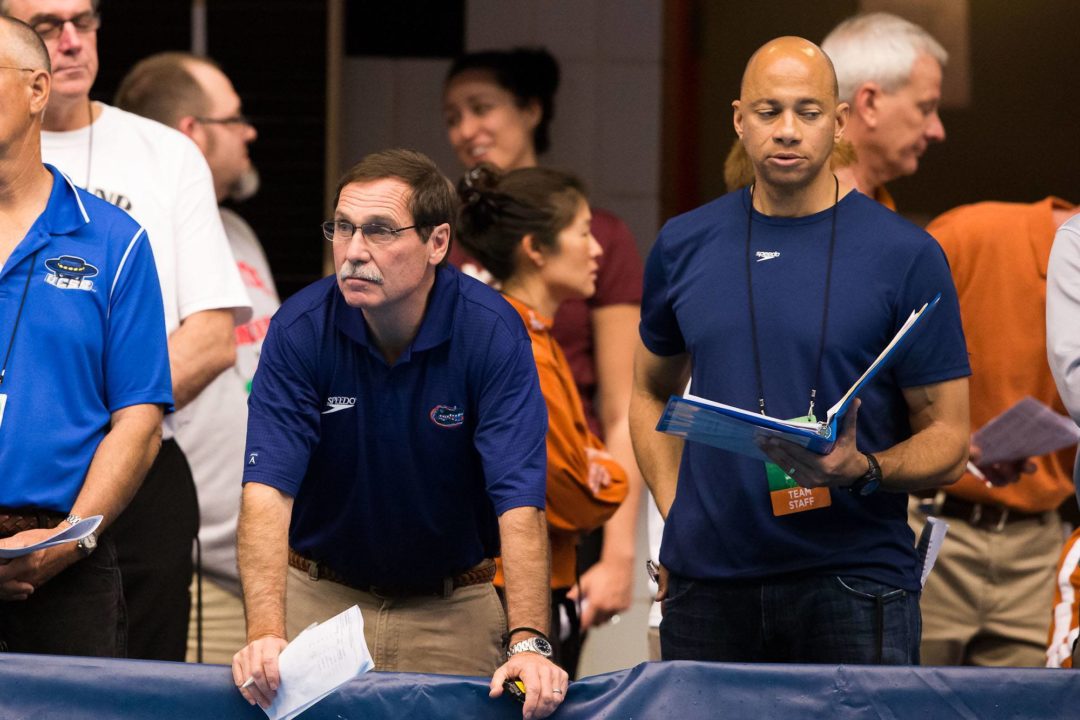 The Florida coaching staff has re-loaded with a deeper men's signing class than we saw from them in the fall of 2014. Archive photo via Tim Binning/TheSwimPictures.com

New Zealand swimmer Bayley Main, younger brother of current Florida junior Corey Main, has signed a letter to swim for the Florida Gators. Given the success that Corey has had, and the focal point that he’s become for the program, that could be huge for the Gators.

Bayley Main was the New Zealand Junior Swimmer of the Year from 2010-2012 and holds multiple National Age Records in his native country.

Even more exciting is that Bayley is even bigger than his brother Corey, who is about 6’2″ or 6’3″ tall.

“Bayley is Corey Main’s younger brother, yet he’s much bigger,” described Florida head coach Gregg Troy. “He has really come on in the past year and shows a lot of potential. He will be a great addition to our men’s squad.”

Read about the rest of the Gators’ signing class below.

Smith became the first male recruit by UF’s first-year diving coach, Dale Schultz, who is excited about the present and future for UF.

“I am extremely excited about my first recruiting class here at the University of Florida.” Schultz said. “With the divers that are currently here and the addition of Samuel, I look forward to having a strong nucleus for the future.”

“We are thrilled about the quality and depth of the class,” Troy said. “We covered a lot of our needs with these student-athletes. This is an outstanding class of men that are not only extremely talented in the pool, but are great students as well.”

Brennan Balogh (Lincoln, Neb.)
According to CollegeSwimming.com, Balogh is the top-ranked recruit in the state of Nebraska and is the No. 14 overall swimmer in Class of 2015. In the pool, he has received numerous accolades that include being named the Midwestern Swimmer of the Year Award recipient multiple times. In addition, Balogh has broken numerous Midwestern records and has recorded 57 national age group top-10 finishes. In the classroom, he is a two-time USA Swimming Scholastic All-American and was named the Midwestern Student-Athlete of the Year in 2013-14.

Coach Troy on Balogh:
“Brennan has tremendous versatility. His best event is the 400 IM, and those type of guys will help our team. He has good skills in the butterfly and backstroke, but most importantly, he is a good student who has a very good work ethic.”

Balogh on Florida:
“I felt a great connection with the coaches and the team when I first met them. The mixture of Florida’s great academics and athletics were hard to top. This school had everything I was looking for.”

Alexander Lebed (Fort Washington, Pa.)
According to CollegeSwimming.com, Lebed is the No. 5-ranked recruit in the state of Pennsylvania and is the No. 53 overall swimmer in Class of 2015. In the pool, Lebed has already qualified for the 2016 U.S. Olympic Trials in both the 200 and 400 IM events. This past summer, Lebed placed seventh in the 200 IM at the 2014 USA Swimming Junior National Championships. At the 2014 NCSA Junior Nationals, he placed fifth and sixth in the 400 and 200 IM races, respectively. He was also a 2012 and 2013 All-American and was a 2012 U.S. Olympic Trials qualifier at the age of 15 in both medley events.

Coach Troy on Lebed:
“Alex is very versatile swimmer who will add a lot to our men’s team. He comes from a very strong training background that will help him down the road.”

Bayley Main (Auckland, New Zealand)
Main, the younger brother of UF junior Corey Main, selected the University of Florida with a very impressive resume despite only being 16 years old. Main holds New Zealand age group records for 13 year olds in the short course 50 free (25.20) and for 14 year olds in the short course 100 free (53.10) and long course 50 free (24.55). In 2012, he earned eight gold medals at the 2012 New Zealand Age Group Championships. Between the 2012 and 2013 New Zealand Short Course Championships, Main captured a total of 18 medals, including 10 gold. In addition, he was named the High School Sportsman of the Year in 2011 and the Senior Swimmer of the Year in 2013. In between earning those accolades, Main was a three-time Junior Swimmer of the Year from 2010-2012.

Coach Troy on Main:
“Bayley is Corey Main’s younger brother, yet he’s much bigger. He has really come on in the past year and shows a lot of potential. He will be a great addition to our men’s squad.”

Main on Florida:
“The University of Florida has an awesome swimming & diving program to go along with its excellence academics. I am really looking forward to my college experience.”

Ross Palazzo (Hudson, Ohio)
According to CollegeSwimming.com, Palazzo is the top-ranked recruit in the state of Ohio and is the No. 8 overall swimmer in Class of 2015. In the pool, he is a four-time Ohio high school state champion (200 IM, 100 Breast), Nationally, Palazzo has already qualified for the 2016 U.S. Olympic Trials and is currently a member of the USA Junior National Team. In 2013, he was a U.S. Open finalist and a World Championship finalist as well in multiple events. His accolades continue outside of the pool, as he is a USA Swimming Academic All-American.

Coach Troy on Palazzo:
“Ross is the best breaststroker in this class. I think he can be in the role that Matt Elliott currently serves for us, as a dominate breaststroker. Ross has excellent passion and the desire to be great.”

Palazzo on Florida:
“I know that the University of Florida will provide me with the best opportunity to pursue and achieve my goals in both academics and swimming.”

Samuel Smith (Knoxville, Tenn.)
Smith is currently a member of the USA Diving National Team and has a long list of accolades that include being a 2013 National Champion and a 2012 U.S. Olympic Trials finalist. Most recently at the USA Diving Junior National Championships, Smith placed fourth on both boards, as he posted scores of 534.85 on the one-meter and 595.30 on the three-meter.

Coach Schultz on Smith:
“We are extremely excited to have Samuel Smith joining the Florida Gator Swimming & Diving Program. He is one of the top divers in the United States and is currently on the USA Diving National Team. Samuel will make an immediate impact for the Gators on a national level.

Smith on Florida:
“I chose the University of Florida because of its great academics and the team’s overwhelming desire to win.”

Jack Szaranek (Glenrothes, Scotland)
Szaranek is following in his brother Mark’s footsteps, as he is currently a freshman on the men’s squad. Jack, like his brother, has experienced excellent international success. In 2014, Szaranek won the 50 free at the Scottish Team Championships and earned three medals at the British Youth Games. In addition, he holds multiple Scottish relay records and is a member of the Scottish Youth Development Squad.

Coach Troy on Szaranek:
“Jack is Mark’s younger brother, but he is much bigger than him, as he is about 6’5”. Jack is one of the best young sprinters in the country and he will be a fantastic addition to our team.”

Szaranek on Florida:
“The University of Florida has a tremendous mix of academic and athletic programs. In addition, the coaching staff at UF has a lot of experience and has delivered proven results. I am very excited to join the team.”

Stanley Wu (Concord, Calif.)
According to CollegeSwimming.com, Wu is the No. 21-ranked recruit in the state of California in the Class of 2015. In the pool, he is a Junior National qualifier, a two-time high school All-American and school record-holder and Wu was selected for the 2012 Western Select Camp for USA Swimming. Wu also recorded a top-10 time in the 200 fly, when he was competing the 11-12 years old age group.

Coach Troy on Wu:
“Stanley has really come on this past year and improved. He came highly-recommended by his club coach out in California.”

Wu on Florida:
“I chose the University of Florida because of its great academics in my anticipated major, its rich history with great swimmers and the reputation of UF’s excellent coaching staff.”