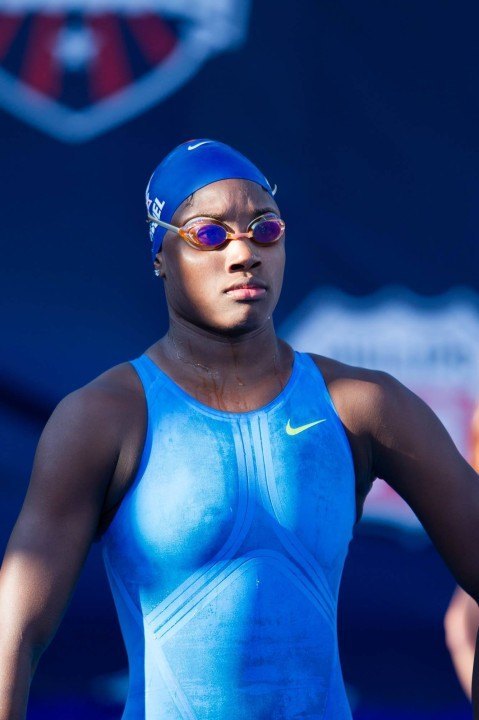 Simone Manuel did it again during day two prelims of the Art Adamson Invitational. Manuel swam 1:43.01 in the 200 freestyle, an NCAA A cut and the number one seed heading into finals. Archive photo via Tim Binning/TheSwimPictures.com

After a fantastic first day at the Art Adamson Invitational, Simone Manuel of Stanford came back strong again achieving an A cut and the first seed final in the 200 freestyle final. Manuel swam a 1:43.01, way under the 1:43.90 A cut. She also qualified for the 100 fly A final in seventh at 53.12, taking over three seconds off her seed time of 56.95.

The top 100 fly finishers from prelims, Brittany Aoyama of Boise State (52.06) and Janet Hu (52.07) of Stanford, are both within striking distance of the NCAA A cut of 51.70. Stanford qualified two other swimmers for the A final as well. Lindsey Engel is seeded third with a 52.66, and Mackenzie Stein qualified eighth with a 53.60. The top 12 swimmers from prelims all achieved NCAA B cuts.

Sarah Haase of Stanford is seeded first in the women’s 100 breaststroke with 59.91, which puts her very close to the NCAA A cut of 59.12.

Janet Hu is just off of the 51.63 needed for the NCAA A cut in the 100 back. Hu swam a 52.18 in the morning, setting her up for a double that could see her punch two NCAA tickets tonight in finals.

The men’s half of the morning session did not have the fireworks the women produced, but still featured plenty of fast swimming.

Gray Umbach swam a 47.30 in the 100 fly to take the first seed for Stanford. His teammate, freshman Andrew Liang, was 47.31 for the second seed. They were followed by sophomore Connor Black, who touched in 48.24.

Finishing off the morning, Dave Nolan of Stanford swam a 46.74 to take the first seed in the 100 back.

Simone is on FIRE! But so are the FarmFresh-kids… Losing Maya and Felicia was a huge blow, no doubt about it, but Simone and Janet Hu are capable of matching this loss at least based on what’s happening at this meet. Never-mind, Lindsey Engle, Ally Howe and Heide Poppe’s finishing 3,2,2 today in their respective events.

Stanford would have won the 400 medley with an all freshman line up. Poppe’s breast is only a hair behind being their fastest. Hope nothing but the best for these youngsters and excited to see how they develop.

I know, I really want to see an ALL freshman 200MR tonight, but it’s risky as Hasse is way more experienced then Poppe at this and A&M is still ahead. So best to wait I guess. I also want to see Simone go 20.99… geez!

While I hate seeing Simone Manuel swim the 500 free, I like seeing her continue to swim the 200 free. It will help a lot her 100 free in long course and especially the last 25 meters. And if she desires it, a qualification in the US 4X200 free relay olympic team in 2016 is definitely possible.
She can swim 1.42 low in final tonight. And if she still has enough gas, she can swim around 46.50 in the 100 free tomorrow.
What an amazing talent!

The 200 free is just after the 100 fly. Hopefully she will scratch the fly event. It’s useless.