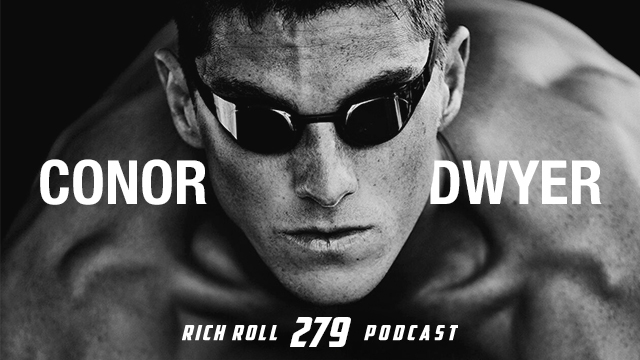 “You can never really dream too big. Just open up your mind and if you really do want it bad enough, you can achieve it through hard work.”

I know what you’re thinking. It’s rather convenient for any Olympic athlete to say that hard work trumps talent.

For perspective, take a glance at the palmarès of this week’s guest:

In total, Conor Dwyer has won seventeen medals in major international swimming competitions: nine gold, six silver, and two bronze. I could geek out on his statistics forever but you get the picture. The dude is super fast in the pool; one of the fastest swimmers of all time.

An extraordinary athlete, Conor is obviously immensely talented. So this idea that hard work beats talent can’t possibly apply to him, right?

Not so fast. Conor was the furthest thing from a natural talent right out of the gate. His performances out of high school were so mediocre in fact, he couldn’t even get the attention of college coaches let alone a swimming scholarship. I simply cannot overstate how rare it is in competitive swimming that an athlete of his current caliber had yet to distinguish himself by 18. It just doesn’t happen.

But Conor refused to give up. Through persistence and a robust work ethic relentlessly applied, a series of circumstances slowly aligned. A believing coach appeared to mentor him, followed by training partners to push him to new levels of possibility and further fuel his self-belief in potential. Over time, all the important ingredients alchemized to bake the cake that is the superstar athlete we know today as Conor Dwyer.

This week Conor shares his extraordinary story from bench warmer to Olympic champion. A story that lays bare a simple core truth I have experienced myself:

when the heart is pure and fueled by self-belief, extreme faith, unwavering patience and an unabating work ethic, the universe conspires to support the dream.

One of the good guys, Conor lives it with every breath. A recipe for success that has fueled his accomplishments and will support anyone — irrespective of talent level — in the pursuit of an audacious dream.

I sincerely hope you enjoy the exchange.

Why I love host RICH ROLL, and you should too.

Rich Roll is no stranger to the swimming family. I used to race Rich back in the day, back when we were age groupers. Rich went on to swim at Stanford, then built a career on the biz side of entertainment. In middle age he made a dramatic lifestyle change that spun him and evolved him into the world-class ranks of ultra-endurance athletes.  Rich Roll is now one of the most sought-after speakers on the planet. Famous for his plant-power lifestyle, Rich Roll challenges the traditional ideas of performance, aging and simply living your best life. Rich is, in one word, authentic. He’s doing it, and doing it well.

Who’s here after the pellets?

Except if you’re the Goat. I’m kinda was mad at him for his London training.

I am so very proud of you Conor! GOD gives us the ability to dream big, he wants us to and you are living proof! Awesome!!!

I think it’d be funny if someone Rick Roll’d Rich Roll. LOL

Its easier for guys to be late bloomers. Now a girl that doesn’t make Jr worlds at 16 is more likely not going to make it, but guys can be as old as 20 years old/

Not all of them….Madison Cox, Claire Donahue, a know a lot of girls that got alot better in college even if they have had a few off years in high school

Limitation mindset based on history, not possibilities.

*through persistence, work ethic, and a massive growth spurt