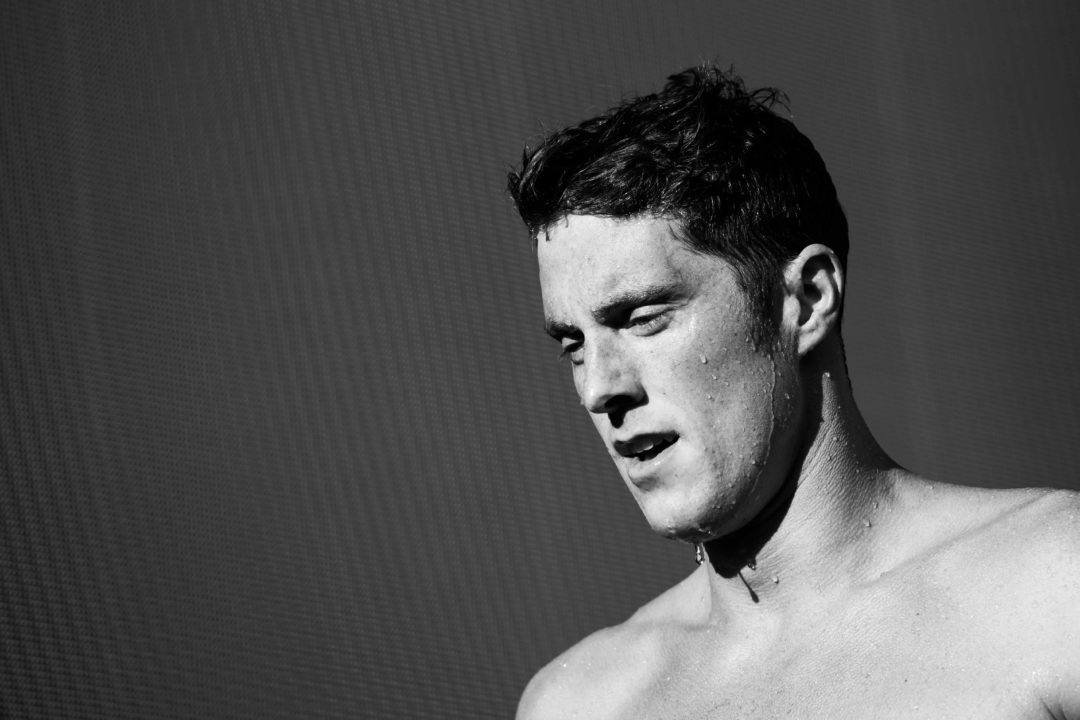 Two-time Olympic champ Conor Dwyer has been suspended for 20 months after a panel found he "had testosterone pellets inserted in his body" according to USADA. Archive photo via Mike Lewis/Ola Vista Photography

Two-time Olympic champ Conor Dwyer has been suspended for 20 months after a panel found he “had testosterone pellets inserted in his body in violation of the rules,” according to USADA.

According to USADA (the United States Anti-Doping Agency), Dwyer tested positive for an anabolic agent in three different out-of-competition tests on November 15, November 27 and December 20, 2018. The 20-month (one year and eight months) suspension is backdated to December 21 and will not expire until August 20, 2020.

That will keep the 30-year-old Dwyer ineligible for the United States Olympic Team, which he made in both 2012 and 2016. Dwyer won gold medals at both Olympics as a member of the men’s 4×200 free relay, and took a bronze medal individually in 2016 in the 200 free. He’s also won 7 long course World Championships medals, three of them gold.

The suspension also explains Dwyer’s late departure from the U.S. World Championships roster this past summer. All of Dwyer’s results after November 15 have been officially disqualified, though Dwyer doesn’t appear to have logged a swim in that time. His last results on USA Swimming’s database are from Pan Pacs in August of 2018.

You can read the full case document here. FINA performed the first test on Nov. 15 and USADA tested him on both the Nov. 27 and Dec. 20 dates. Dwyer appealed the case to a three-member panel with the American Arbitration Association (AAA), and that panel handed down the 20-month suspension today.

USADA says the urine samples were analyzed using a specialized test that differentiates between substances produced by the body naturally and similar substances “of external origin.” Dwyer tested positive for the latter.

According to the document, Dwyer says he had BioTE pellets surgically implanted in his body in a procedure on October 12, 2018. Dwyer says he did not know the procedure was against anti-doping rules, nor that the pellets were testosterone. He says he didn’t undergo the procedure out of concern for his swimming performances, but his “overall mental health and well-being,” citing issues such as “brain fog, low mental and physical energy, difficulty sleeping, depression and anxiety” for many months leading up to the 2018 procedure.

Dwyer says he confided these things in Ed Reardon, a diet center owner who is a personal friend, trainer, nutritional coach and “life coach” for Dwyer. Reardon says he believed Dwyer had over-trained for a year and a half leading up to the Rio Olympics in 2016, and recommended treatment from a Dr. Dana Russo. Reardon had felt symptoms similar to Dwyer’s in the past, and had received treatment from Russo.

The procedure involves inserting small pellets – about the size of a grain of rice – under the skin in a person’s hip area.

Dwyer says he trusted Reardon to make sure he didn’t take any prohibited substances, but the decision document says Reardon’s process for determining whether a supplement was banned was a simple Google search. Reardon asked Russo to look into whether the pellets were banned, and Reardon says someone with the USOPC (U.S. Olympic and Paralympic Committee) told her the pellets were allowable.

Dwyer requested that the suspension be reduced to 16 months or less, which would have allowed him to return to competition just in time for the 2020 U.S. Olympic Trials next June. USADA sought a 4-year suspension. The panel did reduce his suspension down to 20 months, but that will still keep Dwyer out of competition through the end of next summer.

Today i’m announcing my retirement from professional swimming. It has been an incredible ride and I have accomplished more than my wildest dreams. It was an honor to represent my country alongside my teammates. Thank you to my coaches for teaching me that you can achieve anything if you out work everyone. To my mom who taught me how to swim, to my parents who took me to swim practice when it was 5am and subzero in Chicago and sacrificed so much for me because they believed in me and my dreams. Thank you to all my siblings and cousins for never missing a single meet, for being my rock throughout this unforgettable ride. To all the friends and teammates that have been there, old and new, I cherish every moment and memories we have made throughout the years. I have always felt that swimming chose me- it has and will always have a very special place in my heart. This is an unfortunate end to an incredible chapter of my life. I believe that things happen for a reason, and I can’t wait to share with you all the next chapter of my life.

As stated in the WADA code, Article 8, an athlete has a right to a fair hearing. You may read this for yourselves here: https://www.wada-ama.org/sites/default/files/resources/files/wada_anti-doping_code_2019_english_final_revised_v1_linked.pdf

For those who would like explanations, you may wish to read the full Arbitration award here: https://www.usada.org/wp-content/uploads/Conor-Dwyer-Final-AAA-Award.pdf

Of course they can. Most of us are just disputing that someone can get a testosterone implant without knowing it. Also the WADA reference guide clearly states ignorance is no excuse.

“The National Anti-Doping Laboratory in New Delhi returned a negative result, but the World Anti-doping Agency re-tested the sample of four Indian athletes, including Sheoran, in Montreal. All four tested positive.”

I wonder if this means the Indian anti-doping lab needs an investigation.

How many people in the sport are cheating? It actually starts at the age group level with parents giving inhalers and 5 hours energy to 10 year olds and other “treatments.” Obviously I am aware some kids need inhalers to live and compete safely. All for that. I am purely addressing parents who tell 10 year olds to take caffeine jelly beans and 5 hour energy and strange powders from GNC or get the inhaler for an advantage. If timed right they get a huge benefit from a swim that a kid who is just drinking 50/50 Gatorade and water like USA swim recommends doesn’t get. For me, it’s sad for the kid taking the stuff because it’s the start… Read more »

Someone allows a doctor to insert something in your body and you don’t know what it is?! Or why they’re doing it? There would have had to have been blood work done. He wasn’t curious about the results?

He’d still need a TUE no matter what the use of the testosterone and hypogonaism is the only indication for which you can get testostoerone on a TUE.

Elite athlete aside for a moment, every medical professional I deal with drones on and on with endless disclosures about what exactly they’re giving me and what mode of action is takes. Allowing someone to implant something without full knowledge of the substance is absurd, and downright stupid. For an elite athlete to do it in a modern age of testing is beyond belief.

Throw the book at him for sheer stupidity alone.

Several top swimmers have asthma severe enough that they require steroids, but this is legal, and makes perfect sense to everyone… however my kid who doesn’t have asthma has had docs offer to fill out the paperwork saying she does, and say they do it all the time. Hard pass on that, but obviously not all do. And even if swimmers legitimately have asthma, are we saying there is magically no benefit from the steroids? Really…?

But that Dwyer guy, now HE is a bad guy.

A sad ending to an otherwise distinguished career. Unfortunately this cheating episode puts prior performances into doubt and will taint his legacy.