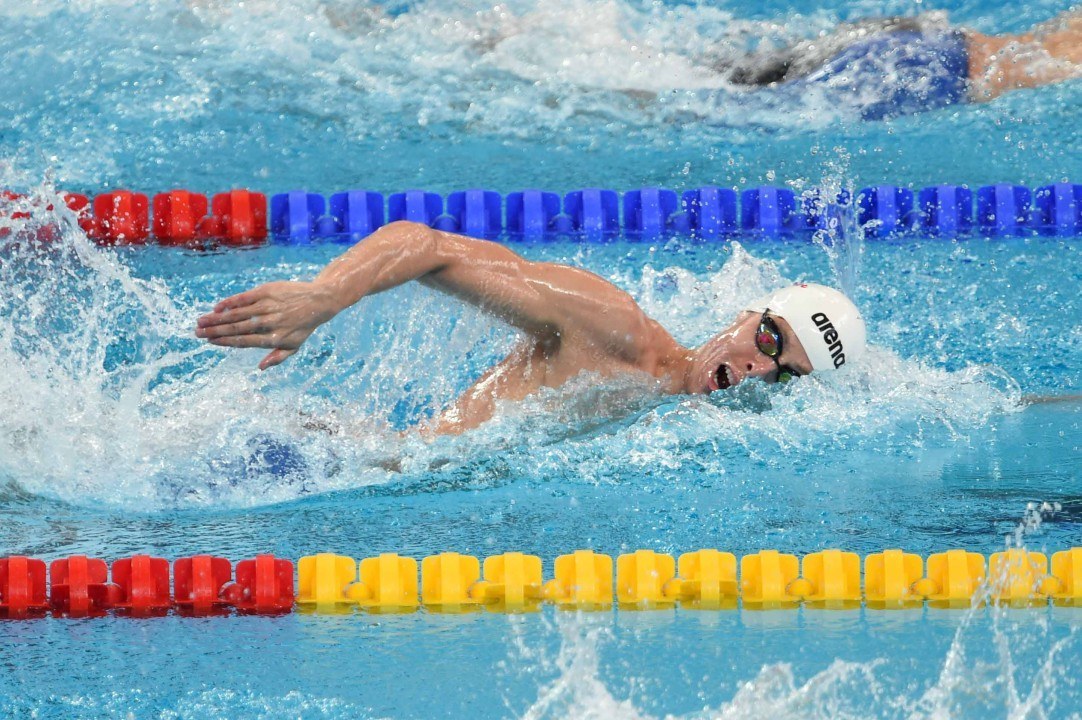 At the 2015 Kazan World Championships, while Chinese world record-holder Sun Yang was absent to contend for 1500 gold with Gregorio Paltrinieri...

At the 2015 Kazan World Championships, while Chinese world record-holder Sun Yang was absent to contend for 1500 gold with Gregorio Paltrinieri of Italy, American Connor Jaeger took up that challenge himself.

Jaeger was in third place of much of the race, then after the 1000 mark, he turned it up a few notches and pushed past Canadian star Ryan Cochrane. While Paltrinieri had built a large enough lead to keep Jaeger at bay, the former Michigan All-American made up a huge amount of ground on the Italian in the last 100 meters. Jaeger finished at 14:41.20 for silver, dismantling the 11 year old American record of 14:45.29 set back at the 2004 Athens Olympics by Larsen Jensen.

Jaeger destroyed his own personal best of 14:47.96, which was initially set at the 2013 Barcelona World Championships. According to the USA Swimming database, that time and his time from today were his only two times ever under the 14:50 barrier.

Jaeger has had a frustrating World Championships thus far, after placing 4th in the 400 free and 4th in the 800 free, elbowed out of the podium with close finishes in both races. In this race, however, he’s earned the silver medal and taken the American record down by over FOUR seconds. He is now the 7th fastest performer ever in this event, and the 2nd fastest in the world this year.

Lars, I suspect the first note that Connor received was from you. Thanks for being a role model and leader! And of course, go navy and fight on!

Really enjoyed Conor’s interview on NBC after the race. Exuded a positive attitude and enthusiasm. Especially liked the description he provided about waiting for Sun Yang to show up – and – his honest response along the lines of “I’m glad he didn’t show up”.

Connor – awesome swim. Congrats! Also, thanks for working with the kids at Park City Swim Team this spring. They have all been watching your swims this summer and it has been super motivating for them.

Anybody believe with another hard year of training, Jaeger may be in contention for gold next year? I do!!

Such a great swim by a guy who really needed and deserved one. Awesome.

Great race for Connor… He gave chase but Italian was just too strong. it nice to be an America record holder!