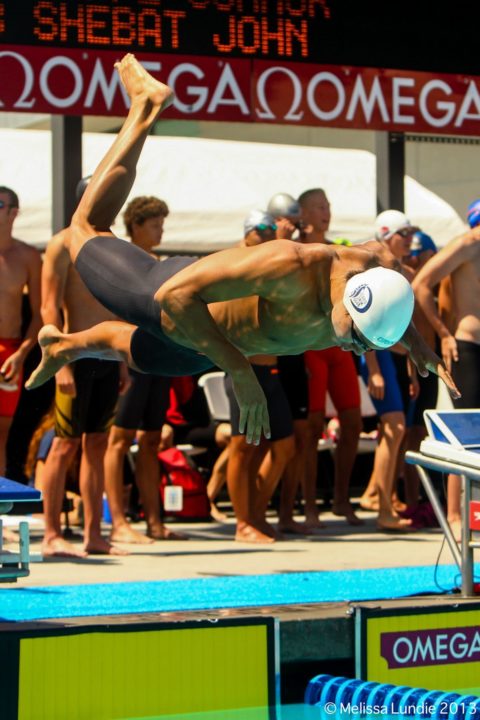 Potential national record-challenger Connor Hoppe will be allowed to compete at the Sac-Joaquin Section Championships this weekend after an executive committee voted to overturn his ineligibility. Archive photo via Melissa Lundie, melissalundie.com

Potential national record-challenger Connor Hoppe will be allowed to compete at the Sac-Joaquin Section Championships this weekend.

Hoppe was originally ruled ineligible under high school section rules after he raced at the NCSA Junior Nationals representing his swim club. Sac-Joaquin section rules don’t allow athletes to compete for clubs other than their high school during high school season. Hoppe could have swum the competition unattached, but because he attached to Clovis Swim Club, he lost his eligibility for Tokay High School.

But today, the Sac-Joaquin Section’s three-person executive committee voted to reverse that loss of eligibility, allowing Hoppe to swim at the section championships (the highest championship meet for the area) this weekend.

The school will be fined $1000 for the administrative oversight, according to The Modesto Bee, but Hoppe will not be held out of competition for the mistake. His younger brother Cameron will also be allowed to compete. He was ruled ineligible for the same reasons.

Hoppe will chase the 100 breaststroke National Public High School record of 53.24 set by Andrew Seliskar earlier this year. Hoppe has already been under that time, swimming a 53.12 at that NCSA Junior National meet that originally lost him his eligibility. He’s also got a shot at the Overall National High School record of 52.92 set by private-schooler Jacob Molacek earlier this season.

It’s great that a terrific swimmer gets an opportunity to swim at his last high school swimming meet. However, it is not fair. The rules governing when a swimmer must become unattached in order to be eligible for high school competition are clear. These poor rules have existed for a long time. A swimmer and his or her coach must decide whether they are going to obey rules or risk ineligibility. This situation is unfair to the overwhelming majority who obey rules.

I swam in the same section as Clovis…and am very familiar with Clovis Swim Club. It’s a top notch swim club; probably the best in a 150 mile radius of the city…which explains why a swimmer like Connor would commute daily to swim there.

It sounds like the rules of the central section and the San J. Sections are not uniform…which doesn’t help either.

Honestly, every elite swimmer in high school most likely primarily trains with a USA club. Often times, there is so much overlap in terms of coaches and facilities that you can hardly tell the difference.

I’m pleased he can swim but it’s unfair. I with my US club attended a high level meet in early march and we all swam unattached. ( as per CIF rule) this ment no relays, we had to sit on the deck and watch every other team swim. CIF need to understand March is championship season in swimming, you have a lot of elite out of state competitions and we should be able to represent our US clubs.
It will be interesting to see how many swimmers next year attend NCSA, NASA, Texas short course champs and stay attached. I think this decision has opened the door for club swimmers.

As it very well should… If this is how this governing body (and any others like it) chooses to treat its athletes, swimmers should start making choices about not competing in HS. Colleges don’t care… they just want times…

With that said, there is a purpose for HS swimming… but the coaches need to come together and stop being such babies about their individual influence… It’s such a joke. Grown (mostly) men acting like children.

You assume that what is best for the swimmer, in 100% of the situations, is to practice with the club and not the high school.

You couldn’t be more wrong.

Club coaches deny high school age swimmers of the FUN and opportunity of participating on a team that allows for a purpose greater than the individual. Club coaches do that because they are and must be, at heart, mercenaries that depend on there being enough swimmers on the club to pay the coach’s salary. The high school coach coaches for the love of the sport and to help the kid as a high school coach’s stipend (around $3,000 spread out over 3.5 months of work) does not pay the… Read more »

I agree with Swim Fan. The ruling is unfair to all of the California kids who had to “un-attach” during their high school season. This meant that they could not swim relays as Swim Fan pointed out. Swimming relays means more relay starts, more individual swims, more racing, more racing 50’s of strokes other than freestyle – equals an unfair advantage.

Many great comments on both threads…. but let’s get to the heart of the matter… these rules are archaic and cater to this good ol’ boy mentality of CREDIT…. This is about adults beating their chests over the accomplishments of a swimmer… “He’s my swimmer… he can’t swim with you… I need to look good.”

Why would anyone ban this kid from swimming? And to the A-hole who tattled, I hope your name gets smeared across the boards – you child. Look yourself in the mirror… your making this about you… that’s embarrassing…

We as coaches need to realize that we are a small part of the journey for the ultra-talented… that small part matters in crucial situations, but… Read more »

This seems like a super dumb rule. Of course, high school kids train with a club team outside of school like they do everywhere else in the country. Why are they supposed to pretend they don’t?
It seems like an attempt to standardize athletes’ training, like the NCAA 20-hour-a-week limit. But it can’t be enforced, and really shouldn’t be.

High school swimming has become a victim of club swimming. Professional club coaches rely on the number of swimmers participating with the club for dues and the resulting income for the coaches’ salary. As a result many club coaches tell their swimmers that they may NOT swim with the high school.

I’ve coached all levels (rec, club, high school, NCAA) and see the conflict created by the undue pressure of club coaches to stay on the club. The kids WANT to represent their school. The kids I coach receive exceptional coaching and always perform their best (better than with their club) while representing their school.

Many baseball pitchers have private coaches. Should they (pitchers) be allowed to practice… Read more »

I don’t agree with the $1000 fine against the school; however, this decision is a nice victory for oommon sense and logical reasoning.

Common sense is so rare these days, it should be classified as a super power.

In my opinion, the decision to allow Connor to swim is the best possible outcome.
A deserving athlete will be allowed to compete.
I have spoken to high school coaches, athletic director, and club coaches and all agree that the athlete should not punished.
Now hopefully the CIF can standardize the rules and we can all move forward.
Just a note I hope that the coach or whomever at the last moment who “outed” Connor in an effort to use a recently changed rule to “block” anyone from competing should be exposed for what and who they are……
The rules should ensure a fair and honest competition nothing else.

I don’t know that I completely agree with this. I’m happy to see the kid allowed to swim, as IMHO that’s the best outcome for the athlete and the state. And I also suspect that some of the reason was the possibly new and nuanced difference in the rule for this section, and the variations among sections.

Reporting it in a timely manner and having him sit out the meet after the transgression would, I think, be fair. I agree that I wouldn’t hold that against another coach. However, I think the issue is that this coach apparently (according to comments section hearsay, anyway– although the timing certainly supports this accusation) knew about it at the beginning of the season but waited until the only remaining meet was the championship.

Agree with all of this. But as always with internet comments, we don’t know what we don’t know. Did the opposing coach know this since the NCSA meet (or soon after) and keep the information in their pocket for two months? Of so, bad form.

Did they learn of the infraction recently and report promptly (and perhaps even reluctantly)? We don’t know. Maybe they get the benefit of the doubt.

Now on to the speculation part of our program: If I were a betting man I’d put my money on the parent of another club swimmer who swam unattached at USA-S meet(s) during the school season ratting out Hoppe to the other coach. Who knows?

Can anyone help me with the pronunciation of Jacob’s last name: Molacek? Bothers me everytime I see it.