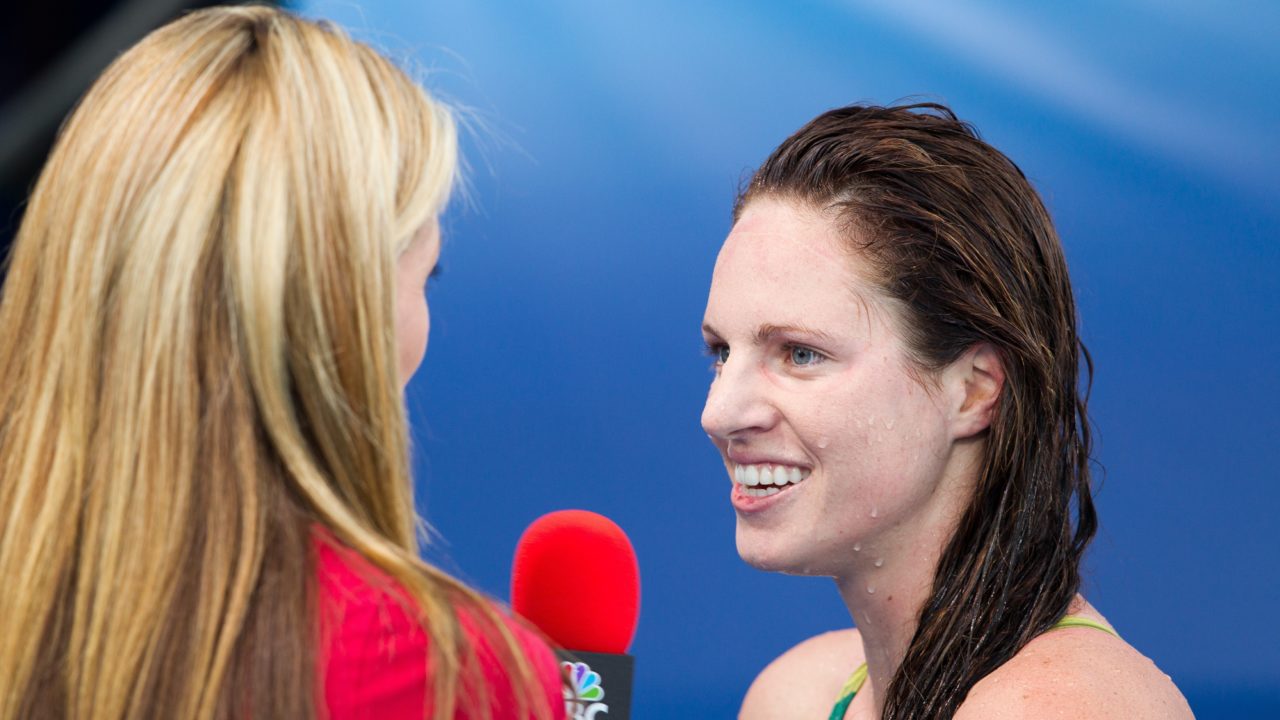 Emily Seebohm will be looking to add to her Commonwealth Games medal total in all three backstroke events...

Four of the top ten swimmers in the world rankings are from the Commonwealth led by Georgia Davies of Wales who recorded a 27.80 in the 50 backstroke at the Flanders Speedo Cup in January. Davies has a lot of international experience, which not only includes the 2012 Olympics, the 2011 and 2013 World Championships, but also the 2010 Commonwealth Games where she won the bronze in the 50 backstroke finishing tied with Australian Emily Seebohm.

Davies has been extremely consistent throughout the year swimming under the 28 second mark five times, while there are only two other women in the Commonwealth who have achieved the same result. She has been able to have solid performances at bigger competitions, but she has not improved much since 2011 where she recorded a 27.96.

Lauren Quigley of England won the 50 backstroke at the British National Championships just ahead of Davies, posting a season and lifetime best time of 27.90. The 19 year old Quigley has limited experience on the international stage, competing on her first British senior national team in Barcleona last year. She had a very strong performance in this event at those championships posting and lifetime best and finishing eighth in the final.

The Commonwealth Game undoubtedly hold a special place in Seebohm’s heart. In 2010 she collected an amazing eight medals (3 gold, 2 silver and 3 bronze), which included tying Davies for the bronze in the 50 backstroke. Seebohm did not perform well in this event at the 2013 World Championships, missing the final, but her season’s best is stronger than 2013 and is only nine one-hundredths of a second off her textile lifetime best of 27.90.

Fran Halsall of England has the next fastest time having posted a season’s best of 28.04. It is unusual to see Halsall race this event, in fact she has never raced it at a major international competition. Before this season she has only swum the event four times since 2009.

Before the British Championships Halsall told Yahoo Sports that if she qualified she was looking forward to swimming the event in Glasgow, “It’s going to be a great competition. I’m hoping to post Team England consideration times in five events, including the 50m backstroke. This will be a new event for me but I’ve been training hard and it will good to see how competitive I can be.”

Australian Madison Wilson was a late addition to the team when her training partner, Meagan Nay, had to pull out of the event due to an injury. Wilson is a pure sprinter and will have her greatest chance for success in the 50 having posted a 28.25, which is the fifth fastest time in the Commonwealth.

Brooklyn Snodgrass enters the games with a season and lifetime best of 28.56. Snodgrass won NCAA championship title in the 200 backstroke, so she knows how to race and win against quality competition despite her inexperience on the international stage.

In the 100 backstroke Emily Seebohm tops not only the Commonwealth, but the world rankings as well having posted a time of 58.92. Seebohm is far and away the favourite in this event. The 2012 Olympic silver medalist has a best time of 58.23, which is almost a second and a half faster than anyone in the field. Even with an off swim, posting a 59.06, at the 2013 World Championships she collected the silver medal.

Seebohm is the defending Commonwealth champion in the event and will look to add to the eight which she earned in 2010.

Georgia Davies comes into the event with a season and lifetime best of 59.78. Davies has also had experience on the international stage in the 100 backstroke, finishing sixth at the 2010 Commonwealth Games and 15th at the 2012 Olympics. She had a disastrous swim at 2013 World Championships, although she placed sixth in the 50 she added a second and a half on to her previous season’s best in the 100 posting a 1:01.61 to finish 16th.

She has shown that she has the speed in the 50, but the second half of the 100 has not been kind to Davies over the years.

In Barcelona last summer Australian Belinda Hocking finished eighth in the 100 backstroke. This year Hocking, who is more of a 200 specialist, has a season’s best of 59.83. Her lifetime best of 59.29, which she recorded in 2012, is the fastest in the field next to Seebohm. Hocking also has a great deal of experience on the international stage winning back to back World Championship silver medals in the 200 backstroke and has represented Australia at every major international competition since the 2008 Olympics.

In the past few years Hocking has not shown the speed to keep with the top women in the first half of the 100, but undoubtedly has the endurance to out swim almost anyone in the last half of the race.

Canadian Sinead Russell comes into the games with the fourth fastest time in the Commonwealth. Russell is the Canadian record holder with a lifetime best of 59.68, which she posted in 2011. Russell has a lot of international experience but has not always been her best at the biggest moments on the international stage in this event. At the 2011 World Championships she had a very strong swim in the semi-final, but under performed in the final. At the 2012 Olympics and 2013 World Championships she put up strong times in the prelims, but was not able to advance to the final.

Lauren Quigley comes into the games with the next fastest time of 1:00.01, taking silver at the British Gas National Championships behind Davies. In her first chance to represent Great Britain on the international stage in Barcelona Quigley performed well in the 50, but had disappointing results in the 100 and 200 backstroke. Glasgow should be an interesting for Quigley.

Elizabeth Simmonds of England comes into the tied with Quigley in the Commonwealth rankings with a season’s best of 1:00.01. Simmonds, a 200 specialist, has a tremendous amount of experience on the international stage, but mainly in the 200. She did make the final in the 100 at both the 2009 and 2011 World Championships and comes in with a lifetime best of 59.43, which she recorded in 2010.

Although her likelihood of earning a medal in the 200 is better than the shorter distance she should be in the mix.

She comes into the games with the fastest time in the world and the Commonwealth this year having posted a 2:06.40, which is close to two seconds faster than Emily Seebohm who is the next fastest in the field. Although Hocking recorded her season’s best in February she has been the only woman in the world under 2:08 this year and she has done it four times.

You can bet on the field giving Hocking a stronger push than is indicated by the rankings, but she is definitely the favourite in this event.

Emily Seebohm has a shot at sweeping the backstroke events at the competition, but the 200 will be the toughest challenge of the three. She comes into the games with a season’s best of 2:08.28 and a lifetime best of 2:08.02, which she recorded in 2010. For all of the international experience Seebohm has she has very little of in the 200, with her only result coming at the 2010 games where she collected the bronze.

Genevieve Cantin comes in with the next fastest time of 2:09.40. Cantin finished eighth in this event at the 2010 Commonwealth Games and qualified for the semi-finals at the 2011 World Championships. This is the first year since 2010 that she has made a significant drop in the event, improving on her previous best of 2:10.31.

Lauren Quigley comes into the the games with a season and lifetime best of 2:09.79. Quigley did not have a great showing in Barcelona, which was her first shot at performing on the international. As we stated about the Quigley when discussing the 100 backstroke this should be a very good test for the young English swimmer.

If she hits her taper Caldwell will be challenging for the top spot on the podium.