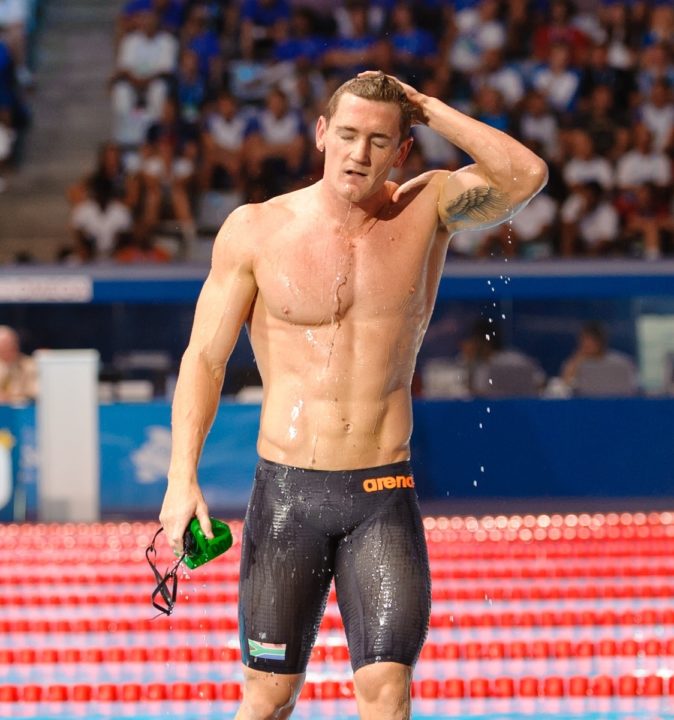 Cameron van der Burgh will be shooting for the world record tonight in the men's 50 breaststroke...

Get a glimpse into the host country’s Commonwealth Games experience in the pool thus far.

The Australians started the night off in style collecting gold, silver and bronze in the men’s 200 backstroke. After yesterday’s finals the Aussies were dominating the medal standings having collected 38 medals, doubling England’s total who are the closet to them in the medal standings.

Mitch Larkin, who broke the Commonwealth record at the Australian Championships in April posting a 1:55.26, went in as the top qualifier after this morning prelims and came out with the gold in a time of 1:55.83. Larkin was challenged in the first 100 meters by Corey Main of New Zealand, who eventually fell off the pace after turning at the midway point. That is when 100 backstroke bronze medalist Josh Beaver of Australia made his move.

By the 150 meter mark Beaver, who came into the event ranked third in the Commonwealth, had pulled close to even with Larkin. There was very little separating the two in the final 50 meters with Larkin touching just ahead of Beaver who finished in a time of 1:56.19, both Larkin and Beaver have made improvements of over a second in this event during the last year.

Larkin finishes off his individual events collecting gold in the 200 adding to the silver medals he won in both the 50 and 100 backstroke.

Matson Lawson of Australia finished third in a time of 1:56.63.

Corey Main of New Zealand finished fourth in a time of 1:57.79 followed by Craig McNally of Scotland who recorded a 1:58.27.

The women’s 800 freestyle saw Jazz Carlin of Wales and World Championship bronze medalist Lauren Boyle of New Zealand duke it out for 650 meters. There was little time separating the two at each turn until the 650 meter mark when Carlin decided that the victory would be hers. Carlin, who won silver in the 200 and bronze in the 400 freestyle four years ago in Delhi, picked up her first medal in Glasgow taking the event in a time of 8:18.11.

In yesterday’s prelims Carlin broke Tracey Wickham’s 36 year old games record of 8:24.62 by qualifying for the finals in a time of 8:22.69. Tonight she shaved another four seconds off the previous mark. She also posted a lifetime best beating her pervious best of 8:18.36, which she posted at this year’s British Championships.

Boyle finished just ahead of the fast charging Brittany MacLean of Canada collecting the silver in a time of 8:20.54. Boyle, who has been battling illness all year, posted a season’s best, but was two seconds off her lifetime best of 8:18.58.

MacLean finished in a time of 8:20.91 to win the bronze taking down her own national record of 8:24.91, which she set at the Canadian Trials in April. MacLean’s improvement over the year has been impressive going from a lifetime best of 8:33.70 to an 8:20.91 which she posted this evening.

Alanna Bowles of Australia finished fourth in a time of 8:24.74 followed by Hannah Miley of Scotland who posted a time of 8:28.15. Miley broke the Scottish record of 8:33.40 which was set by Caitlin McClatchey in 2007.

Jessica Ashwood, who went into the event ranked second in the Commonwealth, finished sixth in a time of 8:29.32 followed by Camilla Hattersley of Scotland who posted a time of 8:33.83 and Australian Laura Crockart who finished in a time of 8:41.64.

Oliver Hynd of England, who won gold at the London Paralympics in this event, took the gold easily winning the men’s 200 IM SM8 in a time of 2:22.86. Hynd was followed by Australians Jesse Aungles and Blake Cochrane. Aungles posted a time of 2:31.35 while Cochrane recorded a time of 2:32.72.

Ben Proud will go into tomorrow night’s final as the fastest qualifier in the men’s 50 freestyle. Proud, who was coming into the games ranked third in the Commonwealth, posted a time of 21.76, beating his own British and English record of 21.86, which he posted earlier this year.

Australian Cameron McEvoy, who took the silver last night in the 100 freestyle, will be swimming out of lane five in the final after posting a time of 21.94. McEvoy’s time is a season and lifetime best, beating his previous best of 21.97.

McEvoy’s teammate Matthew Abood qualified third in a time of 22.07 followed by George Bovell of Trinidad and Tobago.

100 freestyle champion James Magnussen of Australia qualified fifth in a time of 22.23 followed by 2010 Commonwealth silver medalist Roland Schoeman of South Africa who posted a time of 22.26.

Brad Tandy of South Africa qualified seventh in a time of 22.34 followed by Adam Brown of England who recorded a time of 22.55.

In this morning’s prelims Georgia Davies of Wales broke Sophie Edington’s 2010 games record of 28.00 by posting the fastest qualifying time of 27.90. This evening Davies once again set a new games record and added the British and Welsh record in the event finishing in a time of 27.61. Davies now ranks second in the world and is only a tenth of a second off of Edington’s Commonwealth record of 27.51.

Lauren Quigley of England posted a time of 27.72 breaking the English record of 27.90, which she set earlier this year. Quigley was also under Davies old British record of 27.80 that she set in January.

100 backstroke champion and 2010 bronze medalist Emily Seebohm qualified with the third fastest time touching in a 27.89, which is a lifetime best beating her previous best of 27.94.

Canadian Brooklyn Snodgrass qualified with the fourth fastest time posting a lifetime best of 28.25 followed by Madison Wilson of Australia who recorded a time of 28.40.

Kathleen Dawson of Scotland was the sixth fastest qualifier posting a 28.55 followed by Elizabeth Simmonds of England who touched in a time of 28.63 and 200 backstroke champion Belinda Hocking of Australia who finished in a time of 28.87.

Sophie Taylor came into the games ranked second in the Commonwealth in the 100 breaststroke and will leave as the gold medalist. Taylor posted a lifetime best of 1:06.35 breaking her own British and English record 1:07.08 which she set at the British National Championships earlier this year. Her time also moves her up to fourth in the world rankings.

This was a bit of vindication for Taylor who missed out on a medal in the 50 breaststroke after swimming half a second slower in the final than she did in the prelims.

Both women trailed Jamaican Alia Atkinson at the 50 mark, but overtook the 50 breaststroke silver medalist in the last half of the race. Atkinson collected the bronze in a time of 1:08.14, almost one and a half seconds slower than the 1:06.87 she posted in the semi-final.

Australians Sally Hunter and 50 breaststroke gold medalist Leiston Pickett came close to catching Atkinson in the final 50 meters. Hunter finished fourth in a time of 1:08.26 while Pickett recorded a time of 1:08.46.

Canadian Audrey Lacroix, swimming now toward her 31st birthday, looked very race sharp in the women’s 200 fly final,  and she swam to a 2:07.61 for the gold medal. That improves upon her silver in the last edition of these Commonwealth Games in 2010.

Lacroix’s veteran poise paid off in this race; she did swim the 100 fly at this meet as well, but she’s as close to a 200 fly specialist as any sane person can be. So when England’s Aimee Willmott, Australia’s Maddie Groves, Wales’ Jemma Lowe, and Lacroix’s own countrymate Katerine Savard sprinted out at 100 meters, Lacroix knew to hold back.

By the 150 meter mark, Lacroix had patiently crawled from 5th to 3rd, with Savard leading way out front. She first pulled past her training partner Savard, the 100 meter champion who crashed hard on the last 50 meters – she went from a tenth back of the lead to five seconds back in a single length of the pool.

Then it was Willmott and Lacroix left, and while Willmott is a tough swimmer too, Lacroix was just too good over the final 50 meters. She outsplit the Englishwoman 32.98 to 33.92, which made up the gap to give Lacroix the win.

Welsh swimmer Alys Thomas placed 4th in 2:08.62, choosing a similar pacing to come from behind and tip off her more well-known Welsh teammate Jemma Lowe (2:08.69).

Australian Christian Sprenger, who came into the on top of the world rankings in both the 50 and 100 breaststroke, collected the bronze. Sprenger has had a tough meet missing the final in the 100 and placing eighth in the 200.

Mark Tully of Scotland finished fourth in a time of 27.47 followed by Glenn Snyders of New Zealand who posted a time of 27.53.

Great race between Carlin and Boyle. Carlin loses a bit on every turn to Boyle; that adds up in the 800; if she wins it will be in spite of her turns.

That was absolutely sensational 800 race.