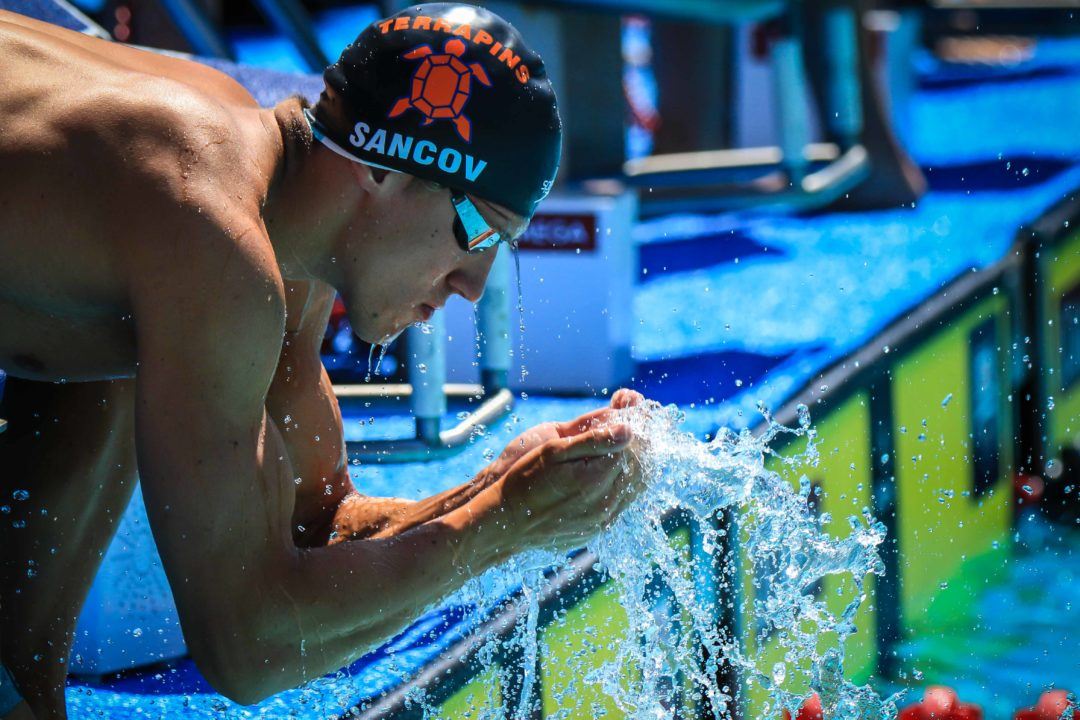 Alexei Sancov will be relied upon heavily during his freshman campaign with the USC Trojans. Archive photo via Jack Spitser

Their relay performance was highlighted by a National title in the 200 medley relay, as seniors Dylan Carter and Santo Condorelli combined with freshman Robert Glinta and junior Carsten Vissering to clip runners-up Cal by .06 and come within less than three-tenths of the NCAA Record.

They placed top-5 in all but the 800 free relay (12th), and Carter and Condorelli were horses with five and four relays swum apiece. Those two, along with fellow senior Ralf Tribuntsov, will be big losses this year as at least one of them had a hand in every relay and they combined for 56 individual points.

Other than the seniors, they had standout performances from Vissering, Glinta and Patrick Mulcare, who only scored individually once but did so in a big way. Vissering was 3rd in the 100 breast, Glinta was 5th in the 100 back, and Mulcare was 3rd in the 200 back.

The sprint freestyle group is hit hard by the losses of Condorelli, Carter and Tribuntsov, as all three figured into the Trojans’ 200 and 400 free relays and were their only individual entrants at NCAAs in the 50, 100 and 200. They do reload with the #3 ranked recruit in Alexei Sancov, who comes in with a 200 best time (1:32.8) already fast enough for the A-final, and a 100 (42.6) within striking distance of the top-16.

They also picked up Indiana transfer Nikola Miljenic, who has best times of 19.4/43.2 which give him a shot at scoring individually and will aid the sprint relays at the very least.

In the 200 and 400 free relays, Sancov and Miljenic will likely be joined by senior Kyle Grissom, who anchored the 200 last season in 19-low and has a 100 best of 44.0. Sophomore Justin Nguyen is another option on the 400 free relay, and he’ll almost certainly be on the 800 once again alongside Sancov, Mulcare and possibly freshman Ariel Spektor or Victor Johansson.

While he didn’t swim individually at NCAAs last year, the transfer of Jake Sannem over to Texas adds on to the significant losses for USC as he had a ton of promise and swam on the 4×200 last year (holding a best time of 1:34.6). Despite solid replacements, team points are going to take a big hit here with a few significant losses.

Another big loss is Robert Glinta, who is back home in Romania after a stellar freshman season. Primarily a backstroker, he’ll also be a big loss on the sprint free relays as he was a quick 41.8 split on the 400 last season, and was probably going to be bumped up to the 200 this year after their other losses.

After no entries in either the 500 or 1650 last year in Minneapolis, the Trojans’ distance squad gets a big boost this year from Sancov, Johansson and another freshman Owen Kao.

Last year, Sannem (4:20.8) was their top 500er and outgoing senior Pawel Furtek (15:07) was their top miler. The distance group is still very thin, but should score a bit (potentially a good bit) at NCAAs after none in 2018.

Like the sprint frees, fly takes a hit due to the subtractions of Condorelli and Carter. Condorelli was 10th in the 100 at NCAAs last year, and Carter had clutch splits of 19.6 (tops in the field) and 44.7 on the medley relays.

This year they have no surefire individual scorers but plenty of depth that should yield a competitive training group and possibly some drops in time.

As of now fly is a bit of a weakness, but with a ton of guys right on the edge of NCAA qualification (last year cuts were 45.8/1:42.6) they could realistically push each other to new heights. This depth will also serve them well at dual meets, Pac-12s and the Texas Invitational, and should be fine in getting by on NCAA relays. They will, however, have difficulty scoring individually at NCAAs. Sancov will almost certainly swim the 100/200/500 free individually, so they’ll likely have to lean on Miljenic and Valente a lot.

The losses of both Glinta and Tribuntsov are tough pills to swallow for the team, as they went from having a lethal 1-2 punch in sprint backstroke to none. The two alternated spots on the prelim and final medley relays at NCAAs, and both finished inside the top-8 in the 100.

Patrick Mulcare will have to take over as the lead-off man on the medley relays, with their next fastest backstrokers last year Jonathan Knox (graduated) and Nikita Tretyakov (not on roster) also gone. 20th last year, Mulcare has an outside shot of sneaking into the consolation final of the 100.

In the 200, Mulcare brings some high-end points after taking 3rd in March.

The 100 breast joins the 200 back as the only two events in which USC had a returning swimmer score at last year’s NCAA Championships, as junior Carsten Vissering placed 3rd in a new school record of 51.28 after spending the fall semester abroad. Five of the eight A-finalists were seniors, including runner-up Connor Hoppe, giving Vissering a great shot to finish in the top-3 again. Defending champ Ian Finnerty and incoming freshman Reece Whitley are the early favorites to go 1-2.

Behind Vissering they have junior Mario Koenigsperger, who missed the NCAA cut by less than two-tenths last year in the 100 (52.95) and is also solid in the 200 (1:56.1). With the breaststroke field as a whole weakening this year, Koenigsperger does have an outside shot at scoring in the 100 if he takes a step forward.

As a whole, the team has one more year of no worries in either medley relay or the 100 with Vissering, but their 200 is a definite weak point.

Condorelli, Carter and Tribuntsov were such a big part of USC’s team that they’re impossible to replace. This year will be a bit of a transition of sorts, especially with Glinta moving on as well.

Despite the major losses, they still have two 3rd-place finishers from last year returning in Mulcare and Vissering. They’ll get some high-end points there, and the addition of Sancov will be huge as he has a great shot to score in three events and will help the relays a ton. The Swede Johansson is a bit of a wildcard having hardly any yards experience under his belt, but he’s got a high ceiling, is almost 20 years old with international experience, and could realistically be mixing it up with Townley Haas and Felix Auboeck come NCAAs.

The story last year was a select few swimming big at NCAAs and piling up the points. It looks to be more of the same again. They’ve got four guys with A-finals in their sights, and then a lot of guys knocking on the door to make their way to the dance. With so many gaping holes to fill from last year, especially on relays, it will be interesting to see who can step up and keep them competitive. A lot of their success this year is relying on the freshmen, so they’ll be coming in with low expectations on the national scene and be looking to turn a few heads as the year goes on.

No UGA top 12 ranking I suppose?

0
0
Reply
JP input is too short
Reply to  swammer

Before you give their IMs a D+, remember that Mulcare has been 1:44.0/3:42 in recent years. Of course, there is a chance his IM issues last Nationals had something to do with why he was absent from Pac-12s, I’m not sure if it was a injury or something.

Salo has underperformed methinks, he has all the perks for a program but seems to be stuck at 6th…..

Don’t sleep on late commit Thomas Finello for the sprints, bests of 20.2 and 44.1, he could be a factor on the relays as well

Doesn’t look like Justin Nguyen will be returning for USC.. he is not listed on their roster nor on the intrasquad roster they just released.. odd

Really hope Jurek and Valente can break through.