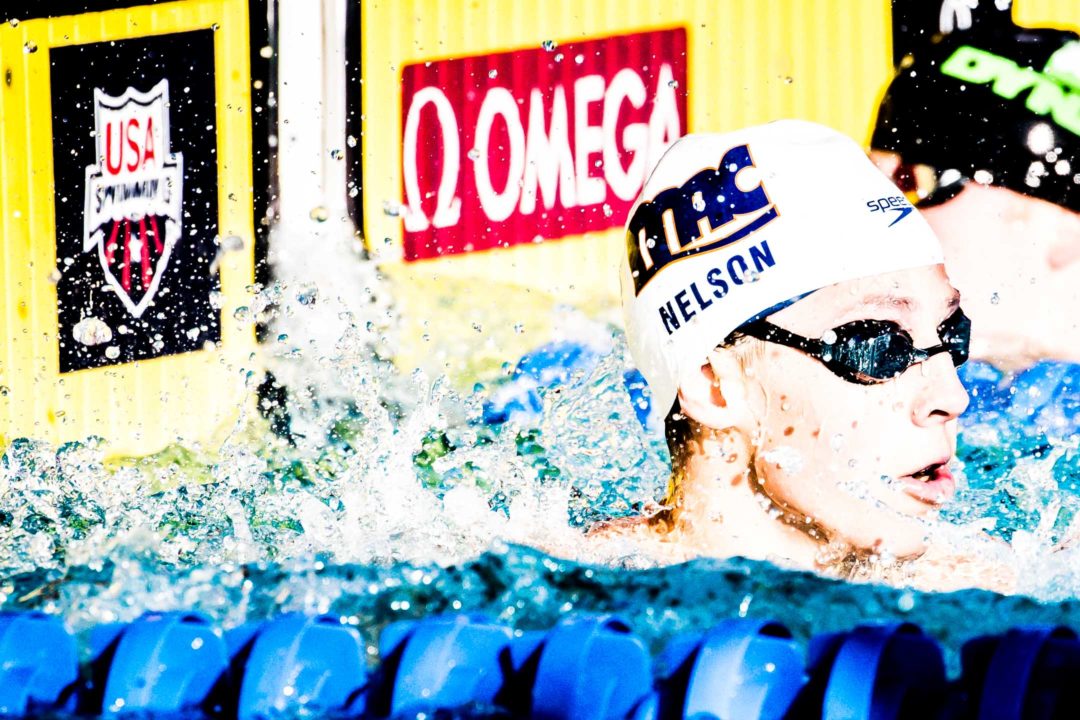 The swim was earth shattering for Nelson, as he entered the meet with a personal best of 2:03.43, which he established in August of 2020. Stock photo via Jack Spitser/Spitser Photography

SwimMAC Carolina 17-year-old Baylor Nelson had a massive performance in the men’s 200 breast, winning the race in 1:56.01. The swim was earth shattering for Nelson, as he entered the meet with a personal best of 2:03.43, which he established in August of 2020. He then swam a 1:58.90 in prelims, earning a lane in the A final, and went on to drop another nearly 3 seconds in finals. He also went on the win the 100 back in a new lifetime best 47.91. Nelson is a Texas A&M recruit.

TAC 17-year-old and NC State recruit Michael Cotter won the men’s 500 free with a 4:19.93. The swim marks a personal best for Cotter, and his first sub-4:20 performance in the event. Teammate Lance Norris finished 2nd with a 4:20.64, marking a .19 second improvement.

This is great that the Sectional meet in Cary allowed swimmers over 18 to swim. It is more inclusive. Kudos to them for making that happen. Unfortunately, the Section VIII sectional meet (in Jenks) is not allowing anyone over 18 or anyone not in high school or lower enter the meet. So Section VIII is essentially an 18/under Sectional meet. This is disappointing to many swimmers who have qualifying times but graduated last year. Not all of them went on to do college swimming. It is too bad that Section VIII (Jenks) wasn’t able to come up with creative options such as duel pools etc in order to allow more qualified swimmers to swim.

Baylor Nelson is an IM star in the making.

Too bad they are not posting live results today. Cuts off after last night.

Special congrats to Baylor for his massive improvements.