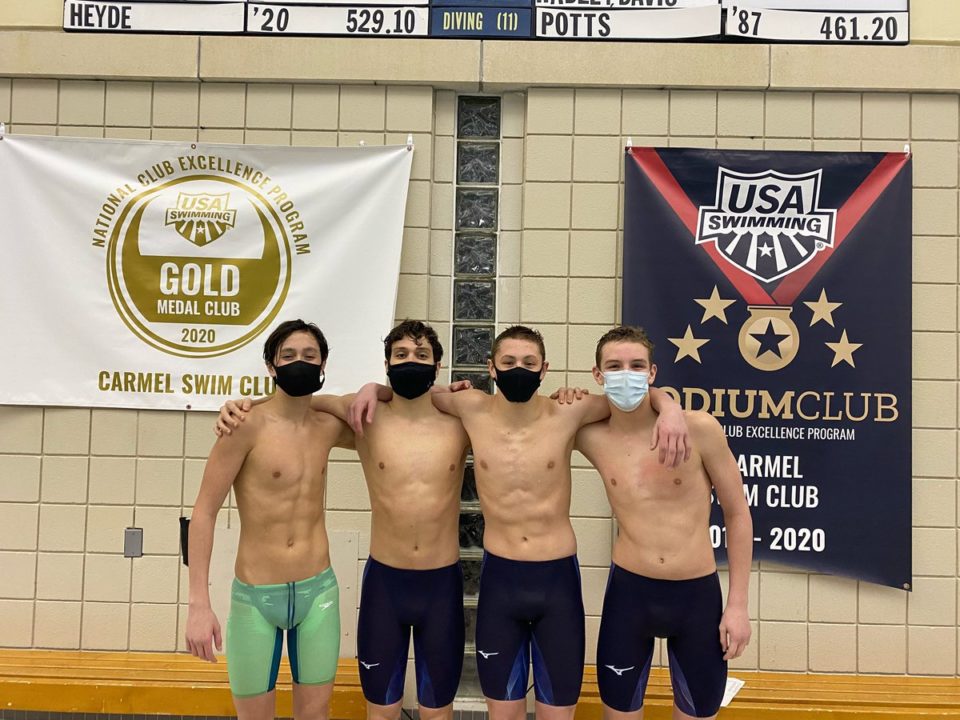 A tri-meet between Carmel Swim Club, Lakeside Aquatic Club, and the Fort Collins Area Swim Team wrapped up more historical swims on Monday. As a refresher, on Friday night, swimmers competed in long course time-trials, while the rest of the weekend consisted of short course yards racing.

After breaking the NAG in the boy’s 13-14 400 medley relay on Saturday, the team of Carter Lancaster, Brandon Malicki, Emile Haig, and Gregg Enoch did it again, breaking the NAG record in the 13-14 200 medley relay. Swimming a time of 1:34.61, the quartet took a half second off of the previous record, set by Nation’s Capital Swim Club last March. Notably, the same Nation’s Capital relay had also held the record in the 400 medley relay that the team had broken earlier in the weekend.

Between Lancaster and Malicki, the team had already built almost a 2 second advantage going into the butterfly leg. Although Haig was almost a second slower than Lawson on the butterfly leg itself, it didn’t matter as Enoch split a speedy 21.68 to close off the record-setting effort.

Brandon Malicki’s older brother, Ryan Malicki also had a historical day. The 16 year-old posted a time of 1:59.03 in the 200 breaststroke to drop over 4 seconds off of his best time. In addition, this moves him up to #46 all-time in the 15-16 age group in the event.

This makes me feel slow

My kids swam at this meet and there was no 13/14 200 Med. relay on the events list. When did they swim this event?

Hi there! I’m a Carmel swimmer. They swam it in the open session that night! They did that 3 nights in a row breaking 3 records.

Time trials have been working out well.

Is there a video of the relays?