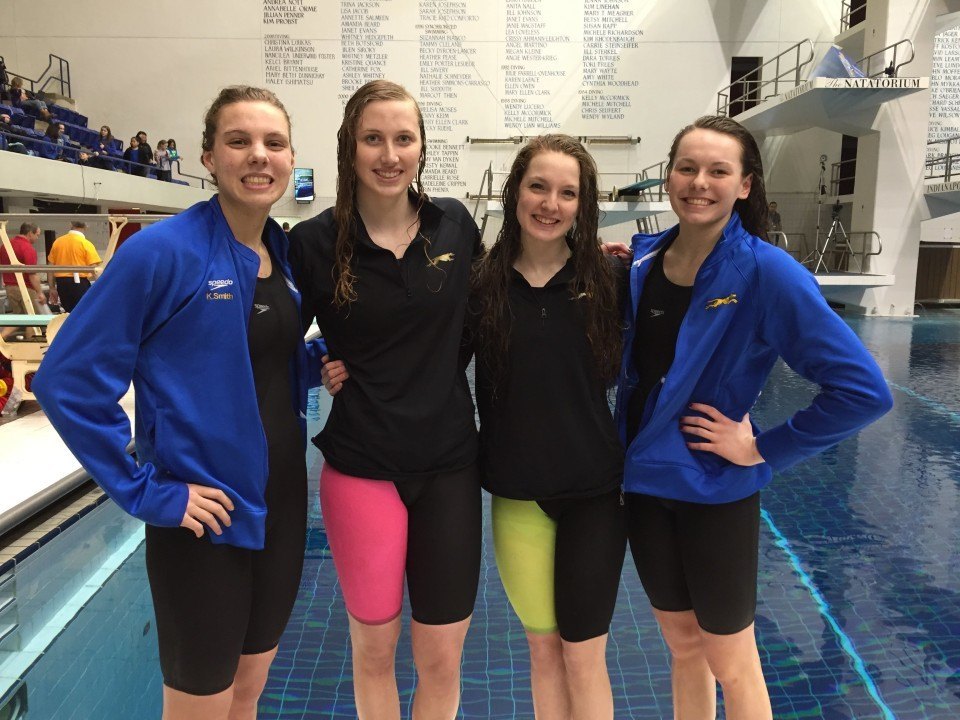 The Carmel girls just made history, breaking all three national relay records in one meet for the second time in... Current photo via Todd Adams

The Carmel girls just made history, breaking all three national relay records in one meet for the second time in history. They wanted to go out with a bang, however. Not only did they break the national record, they beat it by more than 6 seconds! Yeah, you read that correctly… it wasn’t a typo. 6 seconds!!! Veronica Burchill, Claire Adams, Kendall Smith, and Amy Bilquist combined to beat the previous national public school of record of 3:21.20. The private school record was a little faster, but only by a little at 3:20.42.

They are now the only girls team that has ever broken all three national records in one meet, and they’ve done it twice. That relay secured their 29th consecutive Indiana State Championship title.

They also topped Palo Alto Stanford Aquatics 15-18 national age group record time of 3:16.58. Compared against the NCAA, there time would be the fourth fastest time in the country this season.

Take a look at the splits below:

I agree liquidassets. In our state it’s at the whim of the high school coach. Some club swimmers can participate in both while others are forced to choose either or and it’s a shame.

Looking at the prelims to finals times, Adams split 48.1 as the anchor leg in prelims which would have knocked them off another .5 and into the 3:14 range!

US Swimming has got to study the city of Carmel to see how age group and high school coaches work together from the pool of local talent to produce such amazing results, as a model to the rest of the country. Not sure about Smith or not, but at least Burchill, Adams, and Bilquist have had great age group success on both the national/USS and even international level, in addition to high school.

This has got to be SwimSwams swim of the week!!