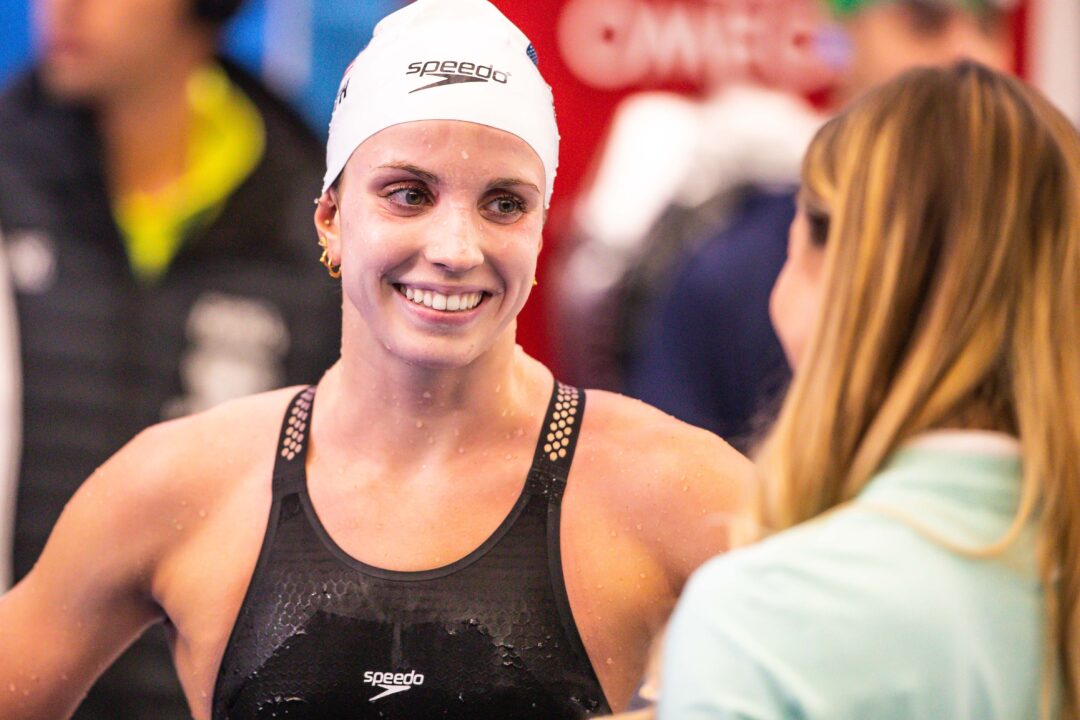 Regan Smith is the fifth-fastest U.S. National team member in the 200 IM, with 75% of her splits being gold-medal caliber. But then there's breaststroke... Archive photo via Jack Spitser/Spitser Photography

On day two of the 2022 U.S. Open, Regan Smith won a tight battle against Leah Hayes in the women’s 200 IM, setting a massive personal best time of 2:10.40. That’s nearly three seconds faster than her best time of 2:13.28 set back in March 2020. She specifically saw dramatic changes in her breast and free splits, which both improved by over a second since that 2020 swim.

Considering that Smith is a world-class backstroker and butterflier, as well as a formidable freestyler, there was no question of whether she’d be able to throw down a legit 200 IM time or not. However, a move from Stanford to Arizona State to train with Bob Bowman, who is arguably the best IM coach in the world, as well as her performances on Thursday turned her IM potential into reality. With Smith’s time being the fifth-fastest among women on the U.S. national team, we now wonder: is she now a legitimate candidate to qualify for major international meets in the 200 IM?

To preface this article, it’s important to note that the semi-finals of the 200 IM clash with the 200 back finals at the Olympics. And with Smith being the world record holder in the 200 back, it’s likely that she won’t be swimming the 200 IM to focus on her pet event. But with fast swims comes the inevitable speculation and discussion, and that’s what we will break down in this article.

When comparing Smith’s splits to the top American 200 IMers, she’s right up there with the rest of them on fly, 0.46 seconds faster than Walsh (the next-fastest American) on back, and 0.87 seconds faster on free than Hayes, the next-fastest American closer. However, her breast split is 1.92 seconds slower than Torri Huske, who is the next-slowest breaststroker out of this American field. That gap is more than the gap Smith has over her competition in back and free combined. When comparing Smith’s breaststroke to that of Walsh, there is a 4.34-second gap, which accounts for the majority of that 3.27-second deficit between Smith and Walsh’s best times.

In fact, Smith’s splits fly, back, and free splits are very similar to Katinka Hosszu’s world record splits (which were added here for reference), but breaststroke sets them apart by a significant margin.

Splits Comparison: Smith vs. Walsh vs. Hayes vs. Douglass vs. Hosszu:

Here’s what a hypothetical race between the above swimmers would look like:

So What Does This Mean?

It’s possible for 200 IMers to succeed with a blaring weak stroke. Kate Douglass has a backstroke split 1.39 seconds slower than the rest of the Americans pictured above, and she still ended up with an Olympic bronze medal. Similarly, Summer McIntosh broke the 200 IM world junior record with a time of 2:08.70, even though she split 39.11 on breast. But a 39 is different from a 41, and a 1.39-second gap is different from the 3 or 4 seconds that the top American women have on Smith in breast. And that deficit is what will keep her from being a top American contender in the event.

But who knows? After training under Bowman, Smith’s breast split improved by over a second, so why can’t it improve even more (alongside her other strokes)? Will she be capable of maintaining her speed in the other portions of her race with a faster breaststroke (her 2020 vs. 2022 times comparison indicates a “yes” answer)?

Smith is already one of the world’s best in events like the 100 back, 200 back and 200 fly, and she doesn’t need the 200 IM to prove herself as a global threat. But when 75% of her race is on pace for a gold medal, the conversation of this event potentially being on her lineup becomes a whole lot more intriguing.

Reminds me of Aaron Piersol’s IM potential capacity in the 2IM … except for that breaststroke.

this post makes me laugh. no one with a 40. breaststroke can ever aim at an international podium

Natalie Coughlin won an Olympic medal in 2008. Don’t remember if her split was under 40, but her breaststroke was pretty horrendous.

No but we can!

Sometimes what people want to swim can be dependent on how good they are at it. So the two are not unrelated.

IMO she has more potential in the 200 free. Substitute out her 41 breaststroke for a 30 free and she’s under 2:00 still swimming fly/back on the first 100 and doing open turns. Seems like she could be at least 1:56 200 free right now, possibly faster.

That visual is AWESOME!

She can absolutely improve her breaststroke. She already dropped a second and she’s only been with Bowman for 3 months! Let’s give her some more time. I hope she also tries the 400IM

And with Smith being the world record holder in the 200 back, it’s likely that she won’t be swimming the 200 IM to focus on her pet event

Well, gotta get back on the team in the 200 back first.

This swim ruled – and I loved the visualization in this post, lol – and I would love to see her figure out that breaststroke split. (V much rooting for her to wreck stuff in the next few years.)

Neither Torri Huske or Regan Smith have the breaststroke leg to compete for a medal at the international level (Summer Olympics, World Championships).

If Missy Franklin could have learned how to UW she’d still have the WRs.

I’m sure she’ll improve some because she’s probably focusing on it a lot more than she ever has, but it’s easier said than done.