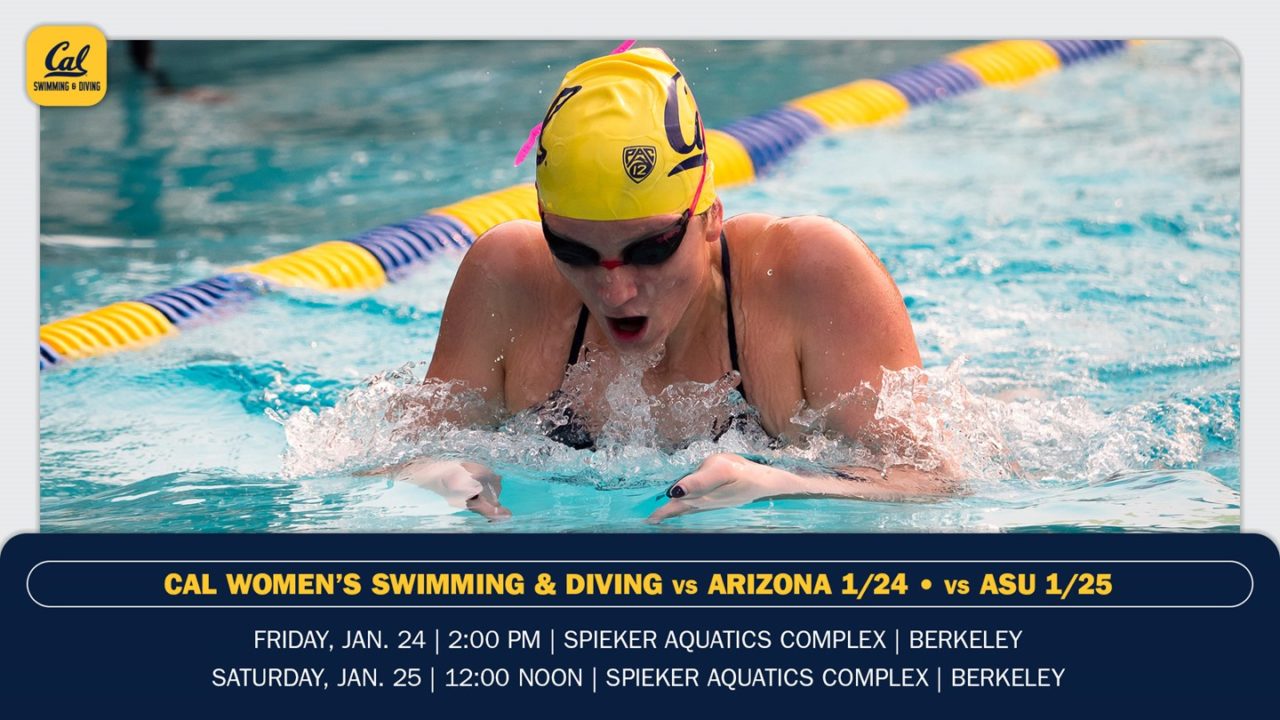 The Cal women's team will host Arizona on Friday and Arizona State on Saturday in what will be their final two home dual meets of the season. Current photo via Cal Athletics

Although the calendar has only recently turned to 2020, the Cal women’s swimming & diving team is hosting its final two home meets of the season when the Bears welcome Arizona Friday and Arizona State Saturday to Spieker Aquatics Center. Admission to both events is free. Saturday’s competition will mark the final home appearance for six Golden Bear seniors – Keaton Blovad, Alexa Buckley, Aislinn Light, Maddie Murphy, Courtney Mykkanen and Abbey Weitzeil. Together, they have helped Cal to a trio of NCAA runner-up finishes, set six school records and combined for nine Pac-12 All-Academic honors.

Golden Bear Notes:
WEITZEIL LOWERS OWN AMERICAN RECORD: Senior Abbey Weitzeil lowered her own American record in the 50-yard free at the Minnesota Invitational when she touched the wall in 20.90 seconds Dec. 5 to become the first woman ever to break the 21-second barrier. Weitzeil, who was named the Pac-12 Swimmer of the Month for December, has held the American mark since March 4, 2016, when she went 21.12 before her enrollment at Cal. She reset the record on her way to the NCAA title last March with a time of 21.02. Overall, Weitzeil owns the top three times and five of the top six times ever in the 50 free.

MCKEEVER SIGNS EXTENSION: Head coach Teri McKeever, who has guided the Golden Bears to four NCAA Championships and 11 consecutive top-3 national finishes during her tenure, agreed to a contract extension through the 2023-24 season, Director of Athletics Jim Knowlton announced on Jan. 13. Now in her 28th season in Berkeley, McKeever is coming off a 2018-19 campaign in which she was named both the CSCAA National Coach of the Year and Pac-12 Coach of the Year for directing Cal to a runner-up performance at the NCAA meet. Head coach of the U.S. women’s swim team at the 2012 Olympics in London, she is a two-time head coach for the United States at the Pan Pacs meet, and she has been an assistant coach at the World Championships seven times, including this past summer in Gwangju, South Korea.

BEAR SMARTS: The Bears picked up a pair of academic honors mid-October, extending a string of scholastic honors for the program. First, the NCAA released its latest Graduation Success Rates, and Cal posted a 100% GSR for the fourth year in a row. Then came news that the Bears were the recipient of a second consecutive Newmark Award for having the highest GPA among all 30 Cal teams (3.370).

I will be going to both of the meets this weekend, but hope there is no rain as all of Cal’s 3 pools are outdoors facilities. I know the swimmers have places to get out of the rain, but we spectators have to bundle together under one large overhead coverage which is fun because we rub shoulders with swim parents, former swimmers and current pro swimmers. Right now it is sunny outside and temps nearing 60+ degrees. Should be decent meets for both the men and women teams.