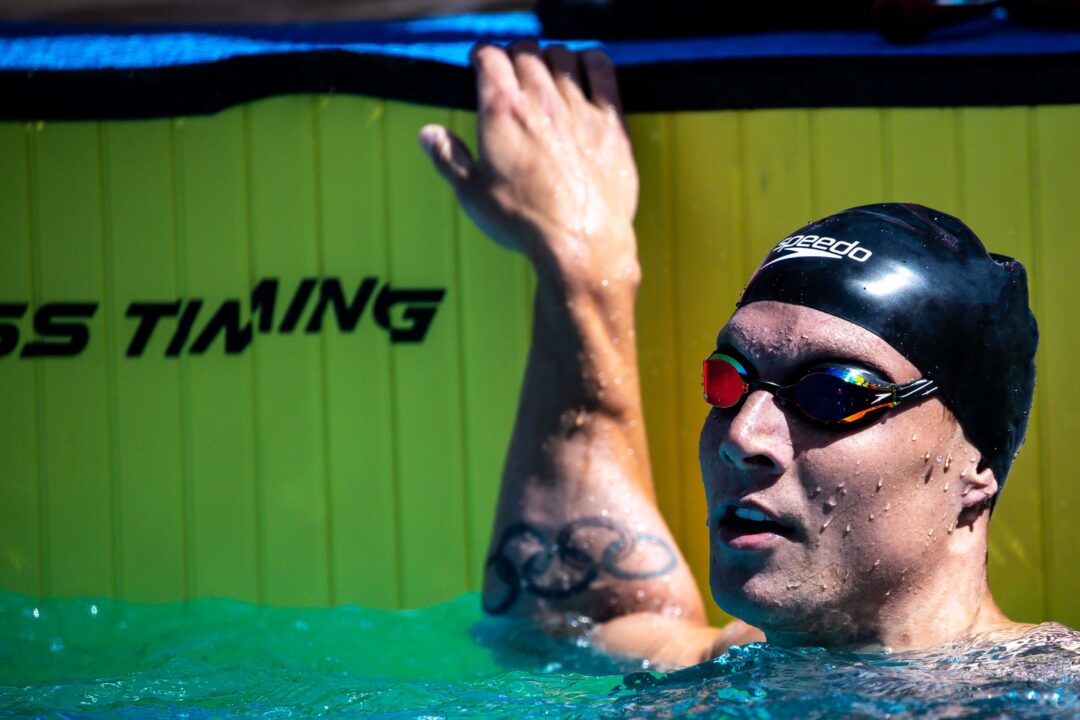 Dressel dropped almost seven-tenths of a second from his best time, qualifying second into the 200 free semi-finals. Archive photo via Jack Spitser/Spitser Photography

The highly anticipated 2021 U.S. Olympic Trials debut for Caeleb Dressel is in the books, and it was largely a successful one.

Competing in the preliminary round of the men’s 200 freestyle, Dressel stormed his way to the Heat 7 victory in a time of 1:46.63, marking his first time under the 1:47 threshold.

Dressel’s previous best was 1:47.31, set at the Pro Swim Series in Richmond back in April 2019. Overall, the University of Florida alum has been in the 1:47s six different times in his career, so getting under that mark is certainly a positive sign moving into the rest of the meet.

Kieran Smith, a current member of the NCAA’s Florida Gators, paced the prelims from Heat 5 in 1:46.54, with Dressel qualifying second overall. Patrick Callan (1:46.96) was the only other swimmer in the field to break 1:47.

The question for Dressel, who now ranks 20th all-time among Americans in the event, is whether or not he’ll race the semi-finals.

Many expected him to blast the prelims and scratch the semis, aiming to put up a time good enough to slot him onto the 800 free relay final at the Olympic Games. Was 1:46.6 enough? Probably not, at least on it’s own. But if he’s performing lights out in Tokyo, the coaches may opt to put him on the relay anyway.

Five of the 15 other semi-final qualifiers have been faster than Dressel’s prelim swim since the beginning of 2019: Seliskar, Townley Haas, Smith, Luca Urlando and Blake Pieroni.

If Dressel did swim tonight’s semi-final, he would still have a full day and a half before his first primary event, the 100 free, gets underway on Wednesday morning. He’s also entered in the 200 fly, beginning on Tuesday, but it would frankly be a shock if he stepped up on the blocks for it.

He scratched the sf. What a pity, thinks he has a lot left in the tank

Maybe the coaches will put him on the relay after seeing such a casual 1:46

Probably ur right, but I still don’t get this move, if he swim at least sf, he will have a full day recover
Or we have to expect him oh the deck for 200 fly tomorrow? That would be a shock

I think it’s probably a smart move. An ez 1:46 still sends a message, and gives him a possible relay spot, whether it’s morning or night, and with such a stacked trials, I don’t think he’s taking any chances

1:45.7 in Semis tonight to prove he belongs in that relay come Tokyo when he’s fully tapered. He then will scratch the final to focus on his other events

it looked soooooooo easy. I think an individual spot is the goal. The event timing is pretty favorable to see this one through and I think he is *correctly* deducing that he has a great shot at individual qualification

As he scratches the event

yes, my comment most certainly did not age well lol

Didn’t look like he even worked that hard. 1:45 tonight?

I’d say he has a 1:45 mid to high in him if he attacks the middle 100 more. But don’t think he has the mid-D stroke required for any faster than that (would love to be proven wrong!)

I wonder about his 200 stroke too but think he might be able to go 1:45 low/44 high on speed and conditioning alone. Would love to see even faster, of course.

Only Troy trains a 18.9 age grouper into a 200 Free Olympic contender

To be fair how many coaches have had the opportunity to coach an 18.9 age grouper?

One? But purely speculating I don’t see many coaches training that swimmer into such events. Maybe Eddie?

The only swimmers under 19 as high schoolers off the top of my head are Dressel, Andrew, and Hoffer right? So three technically?

Not trying to take away anything from Troy but caeleb was a 1:48 2 free when he was 16

Everyone keeps saying this. Doubt it

The 200 free just seems too awkward for Dressel. Chalmers > Dressel

Ya Dressel is a very one dimensional swimmer…

If dressel can go 1:45, his 200 free will be on a similar level as chalmers while having way more raw speed, that makes him very difficult to beat in the 100

The 100 fly just seems too awkward for Chalmers. Dressel > Chalmers