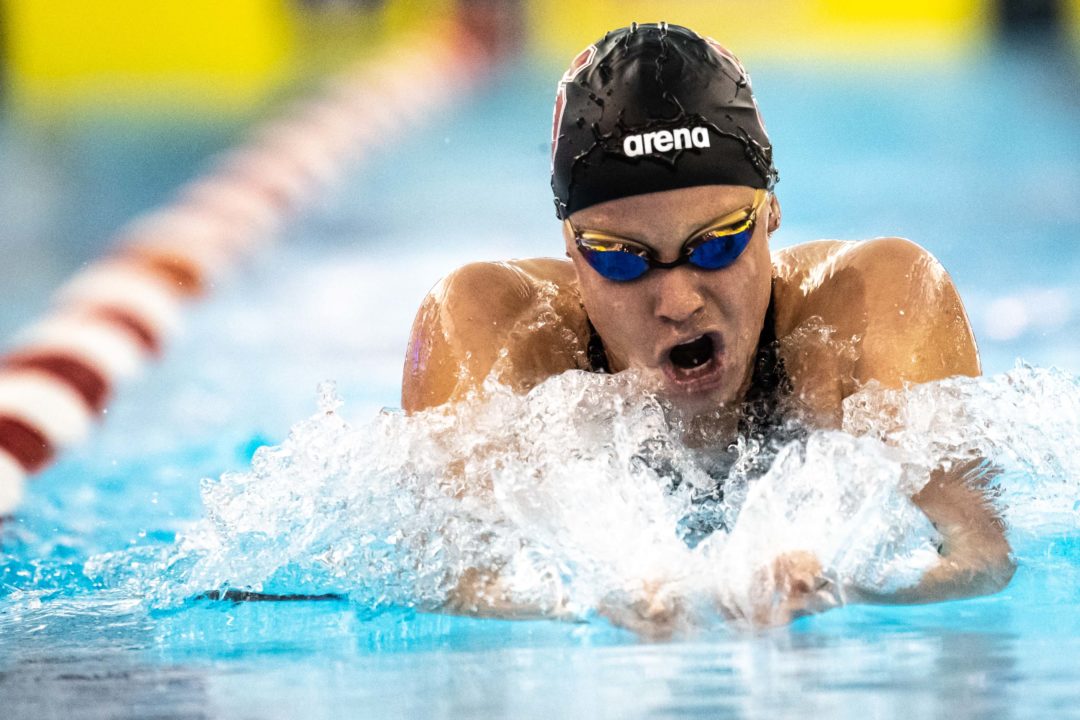 Ella Eastin is one of a large group of ALTO swimmers skipping the 200 IM Sunday morning on the final day of U.S. Nationals. Archive photo via arena

Fans who were holding out hope to watch Caeleb Dressel of Gator Swim Club swim on the final day of 2019 U.S. Nationals will be sorely disappointed. After scratching prelims of all the events he had entered on Days 1 through 4 in Palo Alto, the Swimmer of the Meet at last month’s 2019 FINA World Aquatics Championships has pulled out of his last two races: the 200 IM and the 50 free. Dressel was seeded 12th in the former and first in the latter. He wasn’t alone, though. Six of the top 24 seeds in the men’s 200 IM, including #1 Abrahm DeVine of the local Alto Swim Club, will not contest the event. In the 50 free, #9 seed Justin Ress scratched prelims as well.

The entire women’s 200 IM group from Alto Swim Club dropped out of heats on Sunday morning. That includes #1 seed Ella Eastin who swam the event at World Championships and finished tied for ninth place in the semi-finals. Top-seeded Abrahm DeVine, also of Alto Swim Club, joined Dressel in scratching prelims of the men’s 200 IM.

Four of the top ten seeds in the women’s 1500 free, including #1 Ashley Twichell and #3 Haley Anderson, will forgo swimming the event on Sunday. #7 Trey Freeman is the only scratch out of the fastest heat of the men’s 800 free.

was he ever in Palo Alto?

I think the article on scratches yesterday said he had been seen at the meet. I don’t know if that’s true. Definitely possible that he could have stopped in SF for a few days to see guys at the meet on way back to Florida.

His sister is swimming so good chance he is enjoying cheering for her.

Not sure why this is news at this point?!

Because USA Swimming kept up the charade of “he’s here, he’ll be here tomorrow!” for 5 days when it was obviously not going to happen a week ago