BYU Men & Women Come Out On Top At Intermountain Shootout 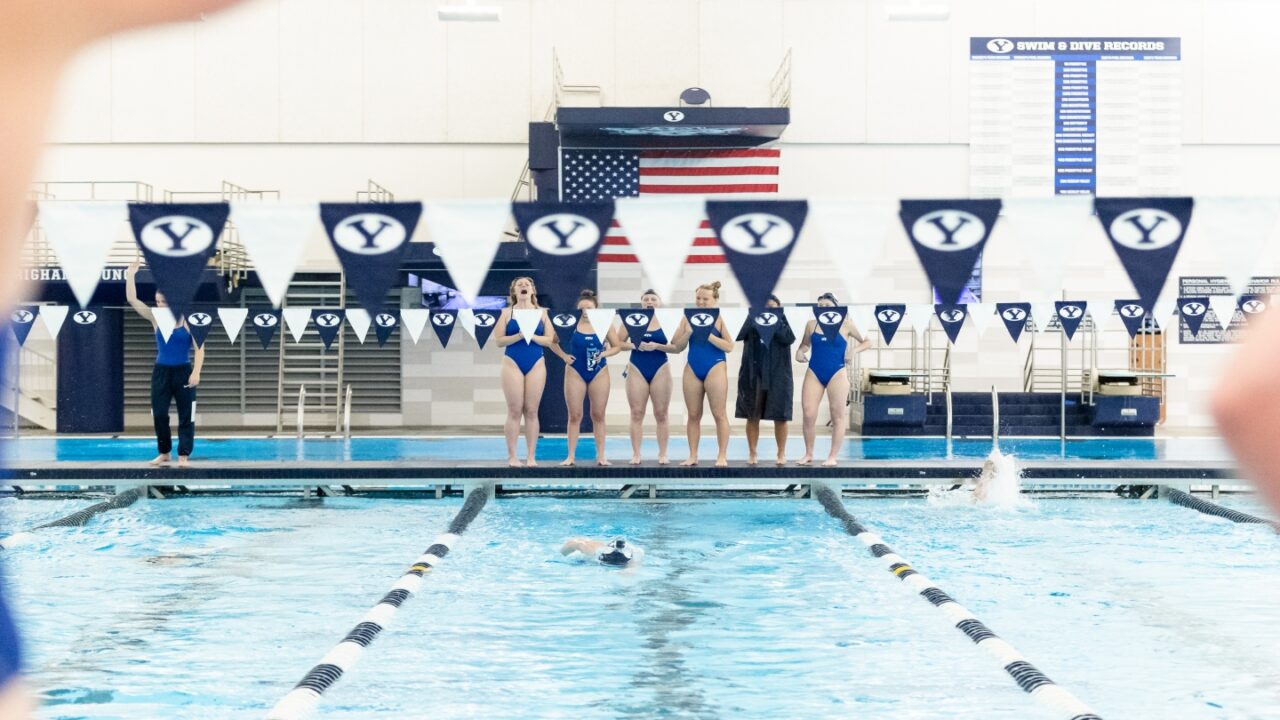 Grand Junction, Colo. — On the second day of the Intermountain Shootout, BYU swim and dive closed out the competition with an impressive performance to come away with the victory.

“As a coaching staff we are very happy for our athletes,” said BYU head coach Shari Skabelund. “They showed grit and passion through the whole competition. We are pleased with how they came together as a team and fought through the fatigue.”

The Cougars began their winning ways in the second event of the day, with a team of Andrew Eliason, Josue Dominguez, Javier Nicolas and Brigham Harrison posting a 1:28.95 in the men’s 200-yard medley relay. Many other athletes contributed to the men’s success on the day. Brad Prolo won the men 200-yard butterfly with a time of 1:51.47 and placed second in the 100-yard butterfly with a time of 50.49.

On the men’s diving team, Mickey Strauss placed first in the 3-meter dive with a score of 560.10, capping off a successful individual weekend. In total, the men won nine events on the day, continuing their excellent start to the season.

“The Shootout was a good kickoff to our diving season,” said BYU diving coach Tyce Routson. “The women’s team performed consistently, with freshman Alexia Jackson winning the three-meter and finishing six points shy of her NCAA zone cut and transfer Tessa Watkins winning one-meter to earn her way to the NCAA zones. The men’s team proved they were strong contenders for this season.”

The women contributed to the team’s success as well, winning four events. Brynn Sproul had another excellent day, winning both the women’s 500-yard freestyle and the 200-yard backstroke with times of 5:05.16 and 2:03.30. Senior swimmer Katie McBratney-Graves placed first in the woman 50-yard breaststroke with a time of 29.91 to also contribute 20 points to the team’s final tally.

Looking ahead, the Cougars will prepare to continue their success as they get set to face TCU back home at the Richards Building Pool in what is already their second to last home meet of the season. The meet will occur on Oct. 13th and 14th, and admission will be free to the general public.

Both Maverick teams finished ahead of two NCAA Division I opponents as the CMU men took second amongst six teams with 873 points.  The CMU women were third out of eight teams with 727 ½ points.

The BYU women finished with 1,041 points while Air Force finished second with 862 ½.  The Mavs were comfortably ahead of both Grand Canyon (605 ½) and Northern Colorado (588 ½).  RMAC foes Adams State and CSU Pueblo tied for sixth with 51 while the CMU club squad was eighth with 39.

Both finished as the meet’s high point scorers with Sampson racking up 97 points to lead all men.  Borgenheimer racked up 86 to lead all swimmers from all eight women’s teams.

Their exploits were far from the only highlights of the day for the Mavericks, who had four runner-up and six third place finishes throughout a strong day.

White, Borgenheimer, Kiara Borchardt and Ruby Bottai finished fourth in the women’s half of the discipline with a time of 1:46.46.

At the end of the day, White, Bottai, Ada Qunell and Logan Anderson finished fourth in the 400 free relay with a time of 3:33.12 while Elkady, Felipe D’Orsi, Kiszczak and freshman Jackson Moe finished second in the men’s event after combining for a time of 3:04.30.

CMU will continue the young season next Saturday competing in the Denver Relays.

GRAND JUNCTION – The women’s swim and dive team placed second in a field of eight teams in the 2022-23 season opening Intermountain Shootout, Saturday afternoon at the El Pomar Natatorium on the campus of Colorado Mesa. The Falcons claimed five first-place finishes in the event.

A STELLAR RELAY PERFORMANCE
The Falcons were exceptional in their relay races as they claimed a share of the top-three in each relay event, highlighted by first place finishes in the 200 medley relay and 400 free relay. The Falcons had relay teams place second and third in the 200 free relay, and second in the 400 medley relay.

FROM COACH MURPHY
“What an amazing start to the season. Our depth and versatility were on display this weekend.  The team truly stepped up and raced and dove extremely well.”

“Our relays were exceptional this weekend, they truly came together as a team and exceeded our expectations.”

UP NEXT
Air Force opens Cadet Natatorium for the first time this season to host Nebraska-Omaha and Colorado-Mines in tri-meet action. Swimming is slated to begin at 6 p.m. on Friday, October 14.

GRAND JUNCTION – The men’s swim and dive team swam to a third-place finish of a field of six at the season opening Intermountain Shootout, Friday and Saturday at the El Pomar Natatorium in Grand Junction, Colorado. Air Force saw two first-place finishes and 11 finishes in the top three.

THE DIVERS
Sophomore standout diver Alex Kenyon led the Falcons with a second-place finish on the 3-meter (538.85) and a third-place finish in the 1-meter (292.15).

NEXT UP
Air Force opens Cadet Natatorium for the first time this season to host Nebraska-Omaha and Colorado-Mines in tri-meet action. Swimming is slated to begin at 6 p.m. on Friday, October 14.