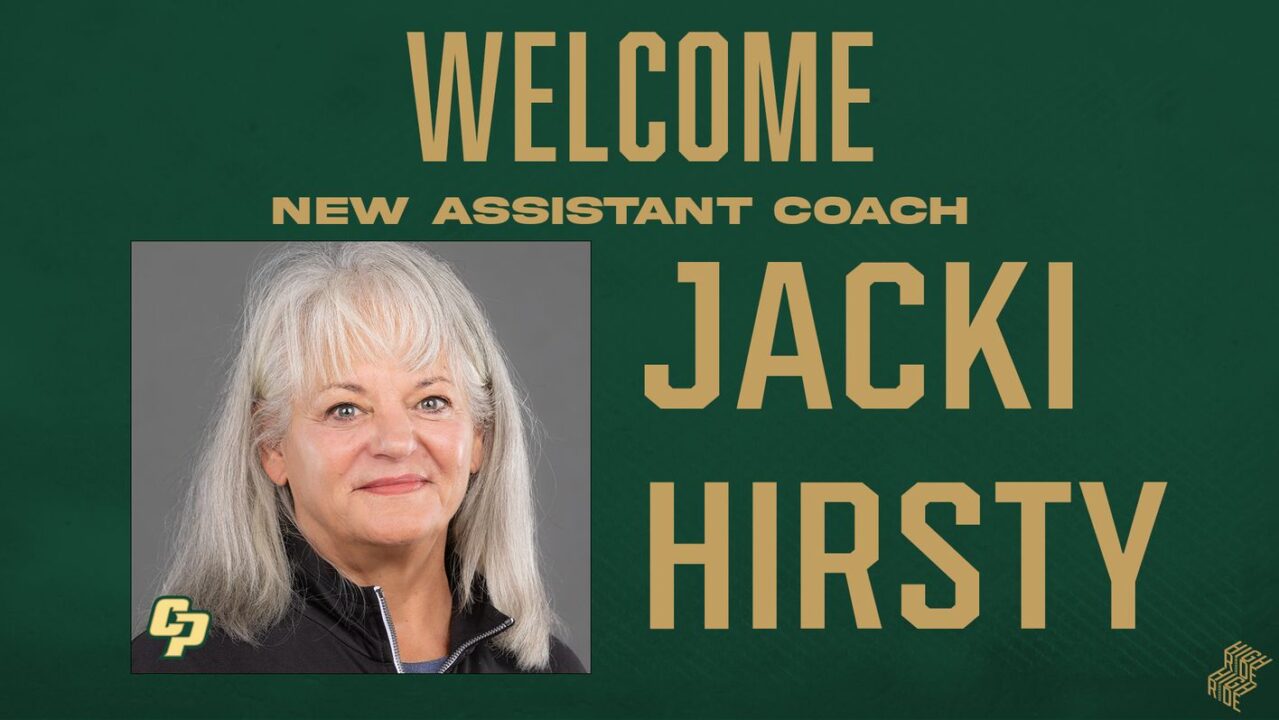 Hirsty brings over 30 years of coaching experience with her to San Luis Obispo, and has spent the last three seasons as an assistant at Rhodes College. Current photo via Cal Poly Athletics

Hirsty brings over 30 years of coaching experience with her to San Luis Obispo and has been mentoring collegiate swimmers for over a decade.

“I’m so excited to have Jacki as an assistant,” Yoshida said. “Her personality and dedication to helping swimmers excel is exactly what I was looking for as we develop a staff to work with our outstanding student-athletes. I plan for Jacki to take a leading role in working with our sprinters, helping to design our power and resistance training sets, and contribute her vast knowledge of improving stroke technique to our swimmers.”

Hirsty spent the past three seasons (2019-22) as an assistant coach for the swimming and diving program at Rhodes College, a Division III school in Memphis, Tenn. Prior to that, Hirsty served as an assistant at Occidental College (2017-2019) in Los Angeles and Assumption University (2011-2015) in Worcester, Mass.

Hirsty is known for being a technical specialist and has a keen eye for recognizing what her student-athletes need to work on in the pool. She has competed in U.S. Masters Swimming events for over 30 years, which she believes allows her to relate more closely to athletes she coaches.

“I can connect with what a swimmer is doing in the water,” she said, “and I can spot pretty quickly where there are flaws and where there can be improvements.

If people are given the proper instruction with the proper technique, they should all have an equal chance of succeeding.”

Before dipping her toes into collegiate coaching, Hirsty was the head coach at Milken Community Schools in LA and Notre Dame Academy in Worcester, and spent time as an assistant at Beverly Hills High School. She worked at the Navy Swim Camp, and was a Head Masters Coach at the East Side YMCA (Rhode Island), Quincy YMCA (Massachusetts), Newton JCC, Babson College, Boston College and MIT.

When Hirsty decided she wanted to leave Rhodes this spring, San Luis Obispo was one of the few places she set her sights on moving to. From there, everything fell into place for her to become a member of the Mustang family.

“I knew I wanted to be on the West Coast and it was just such fortunate timing,” she said. “I wrote to Phil out of the blue in the spring and said I’m planning to move there and when I finally heard from him, I had almost given up … but then he called looking for an assistant.”

Hirsty, a member of the New England Masters Hall of Fame, competed at the highest level of Masters swimming, setting 38 world records, 32 individual national records and countless relay records along the way.

Hirsty, an East Coast native, earned her bachelor’s degree in architecture from Rensselaer Polytechnic Institute and her master’s from the University of Kansas. She was previously an Assistant Professor at Kansas State, Kansas and Texas Tech, and the Director of Student Affairs at the Boston Architectural College.

During her time teaching architecture, Hirsty dreamed about being an instructor at Cal Poly, so she’s thrilled to finally be a part of such a distinguished university.

“I love this place and the school,” she said. “It’s a fabulous place to be and there’s a great culture at this institution. I love coaching smart athletes.”

Me, as an outsider, wondering if ‘Thirsty for Hirsty’ would fly as a slogan. I’ll see what the ratio says

She’s the smartest woman I know!